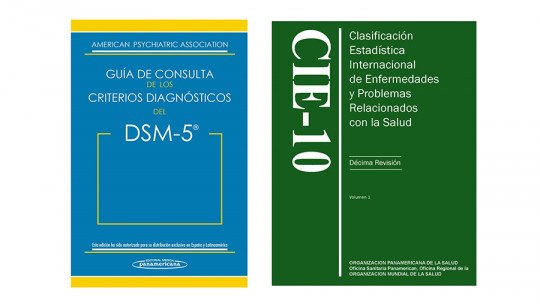 There are many psychic disorders and problems in the world that need to be treated. Depression and anxiety are some of them, but we can also find others like schizophrenia, bipolar disorder.

If we know these disorders it is because they have a name, a diagnostic label that allows us to call the joint presentation of a series of symptoms linked together. And sometimes determining what problem the person in question has can be complicated to assess, as different professionals may assess different aspects and ignore others.

Fortunately, in order to overcome this difficulty, some professionals have been developing classification systems for mental disorders throughout history, the best known and most widely used being the DSM-5 and the ICD-10. But despite the fact that these are classification systems with great similarities between them, they are not the same. What are the main differences between DSM-5 and ICD-10? Let’s look at it throughout the next article.

Before discussing the differences between the DSM-5 and the ICD-10, perhaps it would be advisable first to make a brief mention of what these acronyms, known to all psychologists and psychiatrists, refer to.

When we talk about DSM-5 we are talking about the fifth edition of the “Diagnostic and Statistical Manual of Mental Disorders”, one of the most well-known and relevant manuals and classification systems of psychic disorders and alterations. This edition was published in 2013 by the American Psychiatric Association (hereinafter APA) through expert consensus and multiple research.

This classification system, despite the fact that it is increasingly controversial due to the pathologization of more and more behaviors and modes of functioning and because of accusations of the existence of commercial interests behind the formulation and overdiagnosis of some of these disorders, is one of the most relevant since it offers a framework from which to determine whether patients manifest symptoms and criteria specific to a particular disorder, in such a way as to facilitate diagnosis and treatment both for the professional who treats them and for future interpretations by other professionals.

As for the ICD-10, in this case the acronym refers to the tenth edition of the “International Classification of Diseases”. This is another of the great manuals and classification systems that exist, although this time does not only analyse mental disorders, but all the diseases, disorders and alterations that exist . In it, mental disorders only occupy one chapter, the fifth (or F).

It was published in 1992 by the World Health Organization. Although the next edition, ICD-11, was published in 2018, the truth is that even today the ICD-10 and even the version before it (ICD-9) are still more widely used and extended.

Main differences between DSM-5 and ICD-10

Although the DSM-5 and ICD-10 have many similarities and include psychiatric/psychiatric issues that are very similar to each other, the truth is that they are two different reference manuals with several differences to be taken into account. The following are some of the clearest differences between the two.

1. Level of specificity: mental disorder or general classification of diseases

One of the main aspects in which we can find differential elements between DSM-5 and ICD-10 lies in the fact that while the DSM is a reference manual focused on mental disorders, the ICD is the International Classification of Diseases, including not only disorders of the psyche but also all the medical disorders and diseases that can appear in human beings.

Thus, while in the DSM-5 we will only find mental problems and disorders , these are only one of the chapters or sections of the ICD-10, which, despite including mental disorders in chapter V (or F), also includes any illness or medical problem.

Despite the fact that both are very useful classification systems in the health field and their contents are highly similar to each other, a difference can be found in the specific objective that each one has.

Although both are diagnostically oriented, while the DSM aims at a systematic and precise description of the diagnostic criteria and characteristics of a disorder, the ICD is more oriented to a recording and analysis of the present characteristics of the disorder . In this sense, the former is also slightly more precise in its description of the symptoms.

3. Organization that generates them

An equally relevant difference between the two systems is the organization that has generated them, as well as the recognition they possess.

Although the DSM-5 is probably the best known classification system and is undoubtedly the most used in America, a large majority of psychiatrists in the world and especially in Europe use the ICD-10 .

Within the content or classification of the different mental disorders , one of the differences we can find is the number of large sections or categories .

While the ICD-10 incorporates a total of 10 differentiated sections in the chapter dedicated to psychic disorders, of which three are dedicated to childhood disorders, in the DSM we can find a total of 21 large diagnostic categories. It should be borne in mind that we are talking about large groups of disorders, with various disorders existing in most of the groups.

6. Different disorders or presence of the same disorder with different names

Perhaps the most notable difference is that both DSM-5 and ICD-10 classify psychiatric disorders by different names , including criteria that may differ from each other (for example, they may take into account different time periods in which the symptom should occur). There are even some that directly do not exist or are not considered as diagnostic entities in one of the classification systems, as is the case with mixed anxiety-depressive disorder.

Most of these differences are irrelevant and refer to the same realities, being highly arbitrary.

Another differential element between the two classifications, and this is something that is even more evident between the DSM-5 and the recent ICD-11, is that despite the fact that both classification systems have very useful criticisms, the DSM-5 is based on a perspective and an understanding of the psyche based on Western mentality and culture, while in the case of the ICD-10 the existence of different problems more typical of other cultures is taken into account .

Thus, while in the DWS some problems may not fully meet the diagnostic criteria due to cultural elements that differ from those of the West, the ICE is more transcultural and allows greater applicability in other regions of the world with different circumstances and ways of understanding reality.

Throughout its history, both the DSM and the ICD classification systems have used a multi-axial system, with different axes that allow the recording of different types of problems in such a way as to facilitate the diagnosis and classification of the various problems. However, with the arrival of the DSM-5 this feature has gone from being a common occurrence to a differential element.

The fifth edition of the Diagnostic and Statistical Manual of Mental Disorders has dispensed with the multi-axiality that characterized its previous version (DSM-IVR had a total of five axes), while the ICD-10 maintains three main axes: (clinical diagnosis, disabilities and contextual elements).