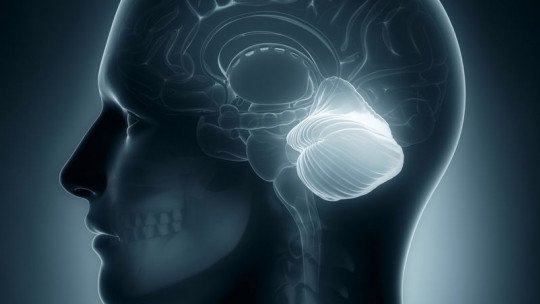 Generally, when we talk about the brain and/or cerebrum, we tend to think of the area known as the cerebral cortex, the part most visible from the outside. However, rarely do we tend to think of a structure located at the bottom and back between the brain stem and the occipital lobe, resembling a second brain in smaller dimensions. We are talking about the cerebellum .

This area is fundamental for our survival, so that injuries or alterations in it imply the presence of serious complications at different levels, both motor and emotional and cognitive. Therefore, in this article we will briefly review different alterations and diseases of the cerebellum and how they can affect us.

The Cerebellum: That Little Stranger

The cerebellum is a ball of wool-like structure located at the back of the brain, specifically behind the brain stem and below the occipital lobe, as mentioned above.

In spite of its size, it is a complex structure that practically resembles a second brain: it has its own cortex with two hemispheres joined by a structure called vermis, bundles of white substance, nuclei and cerebellar peduncles. It has both excitatory and inhibitory neurons.

Although it is apparently less named than other cortical or subcortical structures, the cerebellum has a great importance in different vital aspects for the human being, participating in different cognitive and language functions, in the emotionality, in the feedback received by the movement and in the fine motor. In fact, this structure contains more than half of the brain’s neurons .

The cerebellum has also been shown to be linked to the heartbeat and its frequency. However, traditionally it was considered to possess only functions linked to motor skills, and it was not until more recent times that its relevance in other areas began to be proven.

We are therefore faced with a structure with a large number of functions , which means that damage to the cerebellum can have serious repercussions on a person’s life.

Although the type and location of the specific damage will determine to a greater or lesser extent the symptoms that will be manifested, we can roughly say that a disease of the cerebellum or the presence of different lesions in it can cause the following symptoms .

Ataxia is the lack or absence of stability, coordination and maintenance of posture and movement. In the case of damage to the cerebellum it is one of the most recognisable symptoms. Damage in this region will lead to imbalances and uncontrolled and imprecise movements.

Uncontrolled tremors, gait maintenance disorders, or muscular dystrophy may be caused by injury or disease of the cerebellum.

Memory, especially procedural memory, is linked to the cerebellum and basal ganglia among other areas. The destruction of part or all of the cerebellum causes serious difficulties in this type of learning .

It is common for alterations in the cerebellum to cause various forms of abnormalities in communication and language expression. One of the most frequent is dysarthria .

Various studies reflect that the activity of the cerebellum has a certain level of relationship with the level of manifested intelligence. In this sense, a damaged cerebellum could contribute to diminishing the intellectual abilities of those affected .

Different diseases of the cerebellum can cause perceptual alterations, especially in the areas linked to vision and hearing .

The alteration or injury of the cerebellum or its functioning can help generate or maintain various types of psychological disorders, such as autism, anxiety, ADHD, schizophrenia or mood disorders (the latter especially linked to vermis).

Major diseases of the cerebellum

There are different types of alterations and diseases that can affect this structure of the nervous system. Some of the different diseases of the cerebellum that we can find are the following.

This disease is one of the best known types of ataxia due to genetic causes. The most obvious symptoms are the presence of rigidity, eye uncoordination, instability and imbalance, dysarthria and various bone problems. Vision and hearing problems, tremors and metabolic disorders such as diabetes may also occur. This is a neurodegenerative condition .

The presence of a tumor inside the skull poses a serious risk to the person who suffers from it, even if it is a benign cyst, since the pressure exerted against the skull destroys the system’s neurons. In the case of the cerebellum we can find tumours of different types , as well as a link between the lesions that they can cause in the cerebellum and the presence of cognitive impairment.

This disease of the cerebellum is caused by a mutation of a gene on chromosome three , which is missing or defective. Its best known effect is to cause different tumors in different areas of the body, including the cerebellum.

Disease characterized by the presence of ataxia, hypotonia, changes in gait, motor slowing, tremor during performance of actions and/or due nystagmus

This is a disease of the cerebellum of genetic origin in which the vermis connecting both hemispheres of the cerebellum is deformed or simply does not exist, so that communication between hemispheres cannot take place properly. The patient often has symptoms similar to autism. It often causes developmental delay, intellectual disability, ecopraxia, hypotonia, and ataxia, among other symptoms.

Inflammation of the brain from various causes, either viral or bacterial (can be caused for example by tuberculosis) or produced by infection of the cerebellum or nearby structures.

This disease of the cerebellum causes part of the cerebellar vermis to be absent or deformed, in addition to having an enlarged fourth internal ventricle and producing cysts within the skull. It often causes muscular dystrophy, visual disturbances, spasticity and seizures.

The presence of strokes and strokes can cause neuronal death in a large part of the cerebellum. The symptoms depend on the location and degree of involvement of the area in question.

Although this is not a disease of the cerebellum, the presence of injuries from various traumas can cause serious damage to this region of the brain. It is common for them to cause motor slowing and for possible injuries and abilities to take longer than usual to recover.