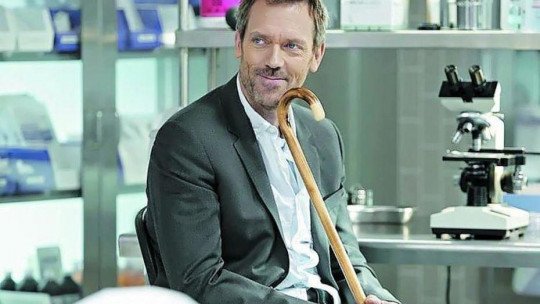 Have you ever seen the TV series “House”? In each of its chapters, the ineffable Doctor Gregory House, played by a masterful Hugh Laurie, embodied a doctor capable of solving any medical mystery that came his way.

In addition to being a true genius at his job, Dr. House was also appreciated and hated by his coworkers. His biting humor and sharp criticism were always an encouragement to enjoy this series.

Winner of several Emmy Awards, the series is one of the most viewed and commented on in recent times. In today’s article we will review the best phrases of Dr. House , to know his peculiar sense of humor and some of the controversial ironies that he used to use in the day to day of the Hospital.

1. Women are like dolphins: it is scientifically proven that they are too intelligent, but few understand them.

About your relationship with the opposite sex.

2. I don’t mean to look at your stupid face, but I can’t walk around all the time with my eyes closed.

One of his trenchant phrases.

3. 30% of the parents don’t know they’re raising the other’s child.

A surprising but real statistic (in the United States).

4. Have you ever heard the saying that you cannot live without love? Well, oxygen is more important.

Against the ignorance of people who believe.

A tautology that reinforces your position on this issue.

Truths, lies… Dr. House was trying to expose them.

About relationships. Dr. House was very skeptical about couples’ lives.

9. Love and happiness are nothing but distractions.

A mythical phrase from Dr. House.

10. Everyone lies for one reason: it works. It’s what allows society to function, it separates man from beast.

11. “Time changes everything”… that’s what people say, but it’s not true. Doing things changes things. Doing nothing leaves things exactly as they are.

One of those motivational phrases that we should apply to our daily lives.

12. People can do good things, but their instincts are not good. Either God doesn’t exist or he’s terribly cruel.

Another phrase that will not sit well with the religious.

From the negative, many positive things and really useful lessons can be drawn.

15. You know what’s worse than being useless? Being useless and ignorant.

A harsh criticism that he launched against one of his collaborators.

16. People hate people who have theories about people.

We are more forgiving of those who show passivity.

17. The goal in life is not to eliminate unhappiness, but to keep it to a minimum.

His particular vision of joy and suffering.

18. If you don’t want a sarcastic answer, then don’t ask a stupid question.

A maxim he applied very often.

19. The temporal lobe controls speech, hearing, and memory. If you lose all that, you will be the ideal woman, but otherwise…

A macho line against one of his patients.

20. Religious behavior is so similar to madness that we can’t tell them apart.

21. If you don’t know how to lie, you won’t know when you’re being lied to either.

You can only be perceptive if you have the ability to deceive.

22. Half the people I save don’t deserve a second chance.

Showing his cruelest and most misanthropic side.

23. If you believe in eternity, life is irrelevant.

Without death, we wouldn’t give any value to the miracle of being alive.

24. People get what they get, it has nothing to do with what they deserve.

Life is tremendously unfair, so it’s not worth blaming yourself or others.

To reflect on euthanasia.

27. When we can’t find a logical answer, we make up a stupid one.

About metaphysical and pseudo-scientific beliefs.

28. Keeping secrets is something I’m very good at, I’ve never told anyone that Wilson wets the bed.

An irony that puts Wilson, his best (and only) friend, in a bad place.

29. Sincerity hurts those who live in a world of lies.

About honesty in a half-truth society.

30. I do not hate anyone; what happens is that the existence of certain people in the world bothers me.

Another one of his sarcasms.

31. New is good, because old always ends in death.

On youth, old age and their particular vision of what is preferable.

32. What I find difficult to believe is the general concept of belief; faith is not based on logic or experience.

Another phrase that emphasizes his love for the scientific method and logical reasoning.

33. The problem is expecting something from someone who’s never shown you anything.

Why do human beings tend to make this fatal mistake?

34. Don’t worry about what people think, they don’t do it very often.

35. You have a parasite… one of those parasites that comes out at nine months. Usually women get attached to them, buy them clothes, take them to the park and give them a name. Look, you have their eyes!

In the middle of an ultrasound.

36. Why is it that when something goes well, God takes all the credit?

Another reflection on the “supreme being”.

37. Do you prefer a doctor who holds your hand while you die, or one who ignores you while you get better?

House was a tremendously unpleasant and unfriendly doctor, but one of the most effective at saving his patients’ lives.

38. Arrogance must be earned, tell me: what have you done to earn it?

Pride is only tolerable if the one who possesses it has good reason to do so.

39. It turns out your opinions don’t work, so you better use mine.

Again about beliefs and how people don’t see beyond their own world.

Perfectionism is what you have.

41. It’ll take an hour to discharge him. Then you can take her away and divorce her.

Another one of your sarcasms directed at a patient’s husband.

42. What would life be like without the opportunity to make stupid decisions.

Another one of his trenchant phrases that might get us thinking.

43. The brain, we all have one. The difference: some use it, others don’t.

About the brain and how we use it.

A phrase that could have been signed by Albert Einstein himself.

45. People want you to look good, but never better than they do.

We are naturally envious.

46. If emotions made you act rationally, they would not be called emotions.

We have different types of emotions and they certainly sometimes make us make rather questionable decisions from a logical standpoint.

47. The most effective laxative in the world is called “we need to talk”.

A phrase that makes any husband’s hair stand on end.

48. Everything is laughter, sex and fun until he asks you… what are we?

The most feared question when you don’t aspire to a formal relationship.

49. Seriously, keep telling me your story. In fact, yawning is my favorite way to show how much I care about listening to you.

A form of contempt camouflaged by false interest.

50. It’s amazing how many problems I could solve with a chainsaw.

Another example of his black humor.