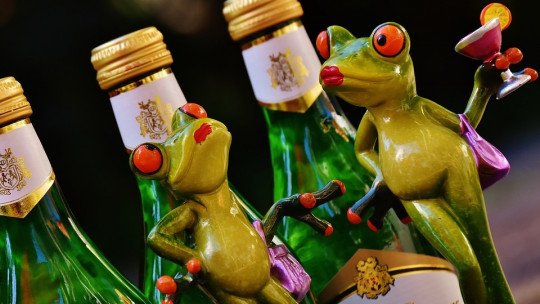 We live in a society in which alcohol consumption among young people has become popular and in which it is part of a large number of traditions and events. Used as an element to provoke both mental and physical disinhibition and to socialise, over time the age of onset of alcohol consumption has been lowered.

Currently, the average age at which people start drinking these substances is around thirteen years old . Although the immediate effects of intoxication are known, what is not so well known is that the habitual consumption of alcohol, even without falling into dependency, causes changes in the brain structure of adolescents.

These changes are especially noticeable and have a greater effect when consumption has occurred in developing individuals.In other words, we can consider that alcohol consumption in adolescence causes brain changes .

Alcohol and adolescence: a bad combination

Alcohol is one of the world’s most popular legal drugs, often used in all kinds of contexts by the vast majority of people. It is a substance that falls into the category of psycholeptics or depressants because its main effect is to cause a decrease in the activity of the nervous system.

Although it seems paradoxical, in small doses this depressant effect produces an increase in the sensation of euphoria and well-being , given that it inhibits firstly subcortical territories and some of the inhibitory processes that we normally use to regulate our behaviour. This is why it facilitates socialization and why the vast majority of people consume alcohol recreationally .

At high doses of alcohol, however, more properly depressive effects appear, with an alteration of the level of consciousness, mental and physical slowness and loss of part of the reasoning and executive functions in general.

Given the reinforcing effects that appear with the consumption of small amounts of alcohol, it is frequent that adolescents, who find themselves searching for their identity through experimentation and the bonding with people far from authority figures and family members, decide to resort to drinking as a means of socialization and disinhibition of their impulses.

However, in addition to the risk of severe intoxication (which can include alcoholic coma and even death due to cardiorespiratory arrest) and dependence, which can be caused by alcohol at any age, it must be taken into account that the adolescent brain is still in the developmental period , so that the consumption of substances with psychoactive properties can produce serious structural and functional alterations in its brain.

The latest research shows that alcohol consumption at early ages, when the brain is not yet fully developed , produces relevant long-term changes in the structure and configuration of neurons.

In particular, the clearest effects occur in parts of the brain linked to learning, memory and executive functions . Experiments with rodents have shown that individuals who have consumed relatively frequently in adulthood during development have much more difficulty with memory, anticipation and planning tasks. These effects occur especially due to involvement of the hippocampus, limbic system and frontal lobe.

Effects on the hippocampus

It has also been observed that long-term empowerment, one of the processes through which we strengthen synapses (the spaces through which neurons communicate with each other) to reinforce learning and which is especially active during childhood and adolescence, is particularly active. Although this may seem positive, this activation reaches such a level that ends up collapsing and does not produce any further learning .

Based on the immaturity of the cells observed, it is speculated that the effect of alcohol, a depressant type substance, probably alters the maturation process. In this sense, it has also been shown that the formation of new neurons and connections between them is slowed down and even stopped .

Affecting this area induces severe difficulties in recognition and short-term memory, while long-term memory is generally preserved. More than forgetting retained information, the most important problems would occur at the level of the ability to “record” and store new information.

In addition to the hippocampus, another of the areas that are most affected by alcohol consumption in adolescence is the frontal lobe , the part of the brain most closely linked to impulse control, planning and executive functions in general , which also affects some aspects of the personality.

Long-term continuous alcohol consumption generates alterations in this area, producing a high level of degeneration and neuronal death especially in the prefrontal area. These alterations arise in people of any age who abuse alcohol for long periods, but it has been proven that in developing brains such as those of adolescents the level of neuronal death is much higher than in other stages .

This may cause the now teenagers to have impulse control problems in the future, diminishing their ability to inhibit, and eventually becoming more aggressive and impulsive. It is also common for individuals who frequent alcohol during the early stages to have a lower capacity for concentration and planning than would be expected. Finally, in the long term , the ability to set goals and be self-motivated decreases , and depression and anxiety are more likely to occur.

Effects on the brain’s reward system

It has been shown that during adolescence dopamine receptors are especially activated and have a certain hypersensitivity to this neurotransmitter, this being one of the reasons why adolescents in general tend to seek new experiences that stimulate them.

In this sense, another element that the various studies carried out have reflected is that a greater frequency of substance dependence is observed among subjects who began to drink before the age of fourteen compared to those who had their first experiences with alcohol from their twenties (a time when the brain is already fully developed or close to concluding its development process).

This fact can be linked, together with the alteration of the inhibition mechanisms characteristic of the affectation of the forehead, to an alteration in the pathways that regulate emotions and the sensation of reward. Both the action on GABA and the inhibition of glutamate NMDA receptors produced by alcohol induce an increase in dopaminergic activity in the striatum, which, when already hypersensitized due to the developmental process, can lead to a facility to fix behaviors that stimulate it even more, such as the consumption of alcohol or other substances.