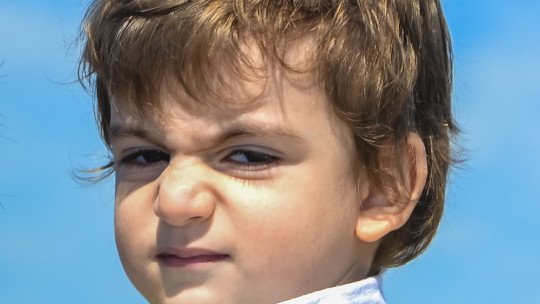 We are gregarious beings, and the fact of living in society makes it necessary to establish a series of basic rules to guarantee a healthy coexistence that respects the basic rights of each fellow citizen, both on a legal and ethical level. Most of us obey most of these rules, or at least the latter, often almost unconsciously by having them internalized.

However, there are people who manifest a behavioural pattern characterized by consistent rejection of them and indifference to the basic rights of others.

Probably, after this description we can think that we are going to talk about adults with antisocial personality disorder. But the truth is that these patterns are also observed in childhood, in those children with dissocial disorder . It’s this disorder that we’re going to talk about throughout this article.

The dissociative disorder, now called conduct disorder in the latest version of the Diagnostic and Statistical Manual of Mental Disorders (DSM-5), is a disorder characteristic of minor subjects (which may begin at different times in child and adolescent development) who throughout their childhood present a continuous pattern of behavior characterized by the presence of a systematic violation of social norms and the rights of others for at least twelve months.

Specifically, this pattern of behaviour is identified with the presence of aggressive behaviour against people (which may include the use of weapons) or animals (where torture and/or execution of small animals and pets are frequent), the use of fraud and theft of small objects or breaking and entering, serious breach of general social norms of coexistence and/or vandalism.

Children with this disorder suffer significant impairments in various settings such as social life and school . They tend to present low levels of empathy, ignoring the rights and feelings of others. It is also common for them to give a feeling of hardness of character, as well as having preconceived ideas about society and rejection. They are also generally characterized by acting without thinking about the consequences and in an impulsive manner, with risky behaviour and a low capacity for delaying gratification and tolerance to frustration.

Generally, their actions do not go unnoticed by their environment, which can also lead to problems of socialization and frequent problems at school and with the law. Despite this, some behaviours tend to go initially unnoticed, being hidden or not very visible (such as torture of animals). They may present a lack of concern for their performance, superficial affection, lack of empathy and a low or non-existent level of remorse for the consequences of their actions, although these characteristics do not occur in all cases.

Dyssocial disorder has been considered throughout history, and in fact has sometimes been confused, with antisocial personality disorder. It should be noted that the two are not synonymous, although in some cases there is syndromic continuity and the diagnostic criteria of both disorders have little divergence beyond the age of onset (antisocial disorder requires that the subject already has a formed personality, with the turning point being considered as from 18 years of age although antisocial behaviour patterns should appear before 15).

In fact, although most of the disorder disappears as they reach adulthood and develop more elaborate behaviors and abilities (especially in those cases where the manifestation of the disorder has a rather adolescent onset), a significant percentage of these children will eventually develop an antisocial personality disorder. In this case we find to a large extent subjects who have had an earlier onset dissocial disorder, further fixing and limiting their behavioural repertoire and their way of seeing life.

Since the conception of this disorder, the scientific community has tried to find an explanation for this type of behavioral disorder. It is considered that there is no single cause of this disorder, but rather that there are multiple factors that influence its genesis .

From a biological perspective, the possible existence of behavioural inhibition problems derived from a lack of development or underactivation of the frontal lobe together with an excess of activation of the limbic system and the brain reward system has been raised. The existence of a lack of moral development, of the capacity for empathy and immaturity is also assessed, which may be given partly by elements intrinsic to its biology and partly by deficient socialization .

On a more psychological and social level, it has been observed that many of these children leave homes where there are behavioural problems and marginalisation. The presence of continuous intra-family conflicts may be associated by the children as a natural way of proceeding, acting as a model, while at the same time may condition the child to learn not to trust others . Social rejection has also been linked to the emergence of this disorder, and it has been observed that they usually have problems relating to each other and solving problems.

The type of parenting pattern is also linked: authoritarian and critical parents with a punitive way of acting or excessively permissive parents whose indications are unclear and do not allow them to learn discipline or the need to comply are more likely to teach their children to act in a covert way or that their will should always be done. This does not necessarily imply a dissociative disorder, but it can facilitate it.

An attempt has also been made to explain this problem as an aspect based on conditioning: throughout their lives, the children have observed that the performance of aggressive acts serves them to fulfil their objectives , the consequences of these acts being initially appetizing and reinforcing the repetition of the same procedure.

Dyssocial disorder is a problem whose treatment is not yet fully established. It is frequent that various multimodal programs are employed, which include both the child and the parents and services in contact with the child, and which require the collaboration of professionals from different disciplines and with an eclectic approach.

At the psychological level, a program that includes training in social and communication skills, as well as problem solving, is usually recommended. Reinforcement of prosocial behaviour, behavioural contracts, modelling and emotional expression are also useful. Cognitive-behavioral programs are generally used , trying to teach positive ways of relating and generating alternative behaviors to those of the disorder.

Training for parents and psychoeducation are also elements to be taken into account that can contribute to reassuring and teaching guidelines for acting and learning with the child.

In very extreme cases and especially in those subjects whose behavioural alterations are due to the experience of emotional discomfort, in addition to treatment dedicated to modifying the elements that generate discomfort or the perception of these , the use of some drugs such as SSRIs may be recommended.