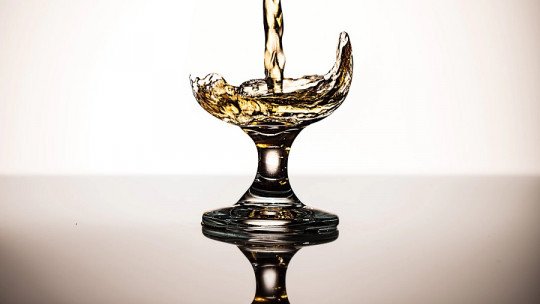 Alcohol is a psychoactive substance that enjoys great popularity and social acceptance, to the point of being part of the idiosyncrasy of a great number of cultures. It is associated with socialization and disinhibition, and its use often begins in adolescence.

This age also is when some adolescents may start to have eating problems , often based on the group’s search for acceptance at a stage when they are still searching for their own identity.

Sometimes, both elements can be associated in a disorder of great danger for the life of the one who suffers it. This is ebriorexia or alcoholism , which we will talk about throughout this article.

Ebriorexia: combination of anorexia and alcoholism

It is called ebriorexia or alcoholism a dangerous eating disorder , which is characterized by the progressive substitution of food intake by alcohol consumption with the aim of weight loss or reduction.

People suffering from this type of disorder suffer from an intense fear of gaining weight , which appears together with a high level of body distortion that makes them feel extremely thick. This, together with the obsession and overestimation of thinness, makes them decide to limit their intake or resort to purgative behaviours in order to lose weight.

In the case of ebriorexia, the person decides to replace the calories to be acquired through food with those obtainable from alcohol, something that implies that in practice they stop eating to focus on drinking . In many cases they also use other purgative behaviours after that, such as making themselves vomit to lose the calories they may have acquired with alcohol.

Generally, this disorder, which is increasingly frequent and encompasses other specified eating disorders , is suffered by young people and adolescents . Although there are cases in both sexes, it seems to be three times more frequent in women.

It is a highly dangerous and potentially fatal disorder that combines the consequences and risks of eating disorders such as anorexia with those of alcohol consumption, abuse or even dependence. The disorders can be both physical and neurological or even psychological , altering organs such as heart, kidneys, liver, brain or blood vessels.

In this sense, we are faced with excessive weight loss to a clinically dangerous underweight, which can trigger amenorrhea, insomnia, dizziness, tachycardia, arrhythmias, hypopressure, anxiety, cyanosis , kidney and liver problems (even to the point of kidney/liver failure), pain, constipation, alopecia, fatigue, suicidal ideation or depression.

It also produces problems with attention and concentration, memory, physical capacity, irritability or decreased libido, as well as a tendency to lie (especially in relation to food).

In addition to this , there are also alterations typical of alcohol dependency such as liver problems like cirrhosis , gastrointestinal problems, cardiovascular problems, hallucinations, confusion, inability to concentrate, memory problems, kidney failure, coma or even death. Also irritability, anxiety, depression and social conflicts with family, partners and friends.

In addition, performance problems arise at the academic and work level, and can even lead to dismissal. Legal and judicial problems may also arise.

Furthermore, it should be taken into account that the fact of not eating makes alcohol have a greater effect on the brain and body , which makes it easier for negative consequences to appear with its use. For example, it is more likely that neurological or digestive problems may appear. It is also more likely that disorders such as Wernicke’s encephalopathy and Korsakoff’s syndrome may appear.

The causes of ebriorexia are not completely defined, considering that this disorder has a multicausal origin.

Among the different factors that can affect or facilitate their appearance are the transmission and overvaluation of beauty canons centred on thinness . It is common for those suffering from this disorder to have feelings of insecurity.

In many cases they have been able to live experiences of rejection that have made them suffer to a great extent, a rejection that may have been linked to their body shape. These experiences can lead them to resort to elements such as alcohol to disinhibit themselves or to feel more accepted. On a personality level, they often have a personality that is either rigid and perfectionist or extremely labile on an emotional level.

Also parental models can have a certain effect , in the case that overvalued ideas about the body shape are transmitted or if the image of alcohol is transmitted as a way to solve or avoid problems.

Treating ebriorexia requires a multidisciplinary intervention that takes into account both the eating disorder and the possible alcohol dependency . In the first place, if the patient is in an emergency situation, hospital admission may be necessary, in which the first thing to do is to stabilize the patient’s state of health and help him or her recover a minimum weight, while monitoring his or her condition and controlling his or her vital signs.

Once the patient is stable, work must be done on developing an appropriate diet and employing strategies such as cognitive restructuring to combat dysfunctional beliefs.

Another useful strategy, both for restricting the intake and consumption of alcohol, is through exposure with prevention of response to anxiety generating stimuli . However, first it is necessary to carry out in-depth work at the cognitive level.

Before that, it will be necessary to generate a desire for change, trying to make the patient gradually become aware of the existence of a problem and its consequences and risks. Later, it is possible to help make a decisional balance that allows to see the need to make a change and to leave behind the previous behavior , and little by little to establish guidelines and plans to carry out and later maintain in time the desired change.

Working on stress management and social skills can be helpful. The practice of psychoeducation with the affected person and also with their environment can be useful so that everyone can understand the process that the affected person is following, as well as to offer various guidelines and assess possible complications in the treatment.