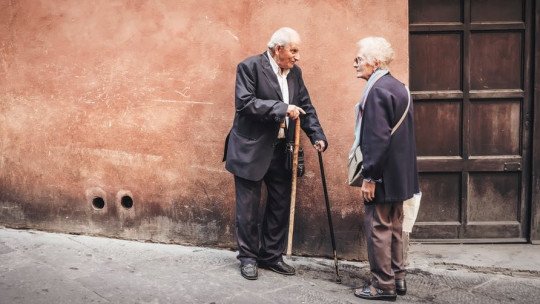 We know that imitation is a fundamental part of human development. Humans, like all apes, imitate others during childhood as a form of social learning. However, in some people this imitation does not stop; it becomes an impossible to avoid tic and they develop a symptom called ecopraxia .

The presence of ecopraxia or ecokinesia may indicate the presence of a neuropsychiatric disorder . Although it may often be evident, it may manifest itself in more subtle ways that go unnoticed by the naked eye.

Below we briefly describe what ecophenomena are, what we know about their causes and in which disorders they are usually most characteristic.

Ecopraxia is a motor tic that is part of the so-called ecopregnoses. These symptoms are characterized by imitation. While echolalia consists of the imitation of sounds or words, ecopraxy corresponds to the automatic imitation of another person’s actions .

In addition to imitation of gestures, it can manifest itself in different ways: ecomimia or imitation of facial expressions, ultrasound or imitation by writing auditory stimuli, ecoplasia or the act of drawing the outline of objects or people mentally, in the air or on some surface. Even imitation of words through sign language, called echolaliophrasia, has been described.

To understand why people tend to imitate in the first place we must take into account the existence of mirror neurons . These neurons are activated when we see another person perform an action and provoke a reaction parallel to that of the observed person, reflecting the actions of the other person. The activation of these neurons does not always lead to movement, since we are capable of inhibiting the motor response.

The mimic center of the brain is located in the lower frontal gyrus, the lower parietal lobe, and the upper part of the temporal sulcus . In addition to these, both the prefrontal cortex and the premotor areas play a key role in imitating new stimuli. Thus, imitation occurs as a process from the top (perception, coding of the external stimulus and preparation of the motor action) downwards (motor execution).

Traditionally, it is understood that ecopraxy happens because the patient is unable to inhibit motor execution and interrupt the process. However, not all empirical evidence agrees. According to recent studies, ecopractic tics are highly over-learning motor responses that, once triggered by an external stimulus, inevitably take place. It is impossible to interfere with these responses and interrupt them, hence their involuntary and automatic nature.

It is possible that ecopraxias, since they are performed very frequently and are more consolidated, are more represented in the brain than voluntary movements. Thus, people with ecopraxy have a very sensitive association between stimulus and tic and find it impossible to control these responses .

So, it’s not that tics are normal uninterrupted responses, it’s that they are much more ingrained stimulus-response associations that are triggered by the slightest stimulus.

There are numerous neuropsychiatric disorders that include ecopraxias and ecophenomena in general in their clinical presentation. However, there is one that stands out above all others. Gilles de la Tourette’s Disorder (GDT), highly characterized by the presence of tics, echolalias and ecopraxias.

From its first clinical description, the presence of tics is necessary for its diagnosis . Patients with TGD show a high rate of tics, coprolalia and ecophenomena, being a fundamental pillar of the diagnosis.

In fact, factorial analyses give greater importance to motor tics and eco-phenomena than to motor hyperactivity or vocal tics, which are more popularly known.

In TGD, tics occur because of excessive activity in the basal ganglia. It is hypothesized that, because the prefrontal of these patients must be constantly inhibiting tics due to this activity, they end up exhausted and do not interrupt the imitation of the movements of others, showing ecopraxias.

In addition, the movements they imitate are usually tics that are within their repertoire. This means that they are much more likely to imitate movements that are already very overlearned in their brain, as we explained a few paragraphs ago, than any other new movement.

Another disorder where ecopraxias can occasionally occur in a more subtle way than in GDD is schizophrenia. The hypothesis is that the schizophrenic patient, due to malfunctioning of the prefrontal area, has problems controlling inappropriate responses such as mimicry.

These patients, unlike the rest, are able to control their ecopraxias if they are prepared in advance not to release them. For this reason, it is thought that the problem of schizophrenic patients has more to do with executive functions than with learning motor tics.

In these disorders we frequently find motor extravagances: mannerisms, flutterings, tics, etc. It is to be expected, therefore, that we find the presence of ecopraxias. However, sometimes autistic ecopraxias do not function as tics , but as behavioural problems.

This means that in people with autism ecopraxia is not so much established by a deficit of executive control or overlearning, but because the individual does not believe that imitation should be repressed or that it may be socially inappropriate.

Other disorders where we can find ecopractical symptoms include

The treatment of ecopraxy will depend on the underlying mechanism that causes it. In cases where neurological dysfunctions prevail, medication will be a cardinal point in the treatment.

However, all forms of tics and ecopraxias are amenable to treatment through behavioural therapy. This is especially important in individuals with autism, where ecopraxia is the result of the inability to understand social reality, and in obsessive-compulsive disorder.