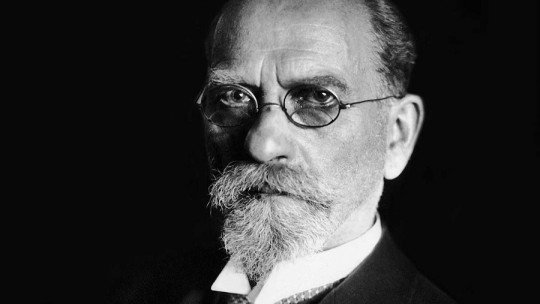 Edmund Husserl (1859-1938) is one of the most influential and outstanding figures of 20th century philosophy. His ideas still live on in the 21st century, and are still being studied at universities.

This author was a German philosopher and logician, founder of transcendental phenomenology. In this article we will see a brief biography of Edmund Husserl , with the most important events of his life, and we will mention some of his works and contributions to philosophy.

Husserl’s full name is Edmund Gustav Albercht Husserl (we’ll refer to him as Edmund Husserl). Husserl was a German philosopher and logician. He was born in Prossnitz (today Prostekhov, the Czech Republic), in 1859, and died in Freiburg, Germany, in 1938.

As we shall see, Husserl was a disciple of Franz Brentano and Carl Stumpf. Edmund Husserl is considered the founder of transcendental phenomenology . He also created, through such phenomenology, the phenomenological movement. This movement consists of a philosophical movement that is one of the most influential of the 20th century.

Husserl worked as a teacher. In 1887 he was in Halle, and then in Göttingen (since 1906). Ten years later, in 1916, he became a full professor at the University of Freiburg. He worked there until he retired (rather, he was removed from teaching because of his birth) in 1928.

Edmund Husserl was born into a wealthy Jewish family on April 8, 1859 in the town of Prostějov, located in the Moravian region. At that time this region was part of the Austrian Empire; today, however, it belongs to the Czech Republic.

Edmund Husserl initially studied mathematics , mainly at the universities of Leipzig (1876) and Berlin (1878), with the then famous professors Karl Weierstraß and Leopold Kronecker. In 1881 he went to Vienna to study under the supervision of Leo Königsberger (a former student of Weierstrass) and obtained his doctorate in 1883 with the work Beiträge zur Variationsrechnung (Contributions to the Calculation of Variations).

Husserl studied mathematics, astronomy, physics and philosophy at different universities : Vienna, Berlin and Leipzig. In particular, he began studying mathematics at the University of Leipzig (1876) and Berlin (1878).

A little later, in 1881, Husserl went to Vienna for work. There he worked under the supervision of Leo Königsberger, a German mathematician. It was in Vienna that he received his doctorate in 1883, with his work with the original title Beiträge zur Variationsrechnung (Contributions to the Calculation of Variations).

A year later, in 1884, Edmund Husserl was taught by the sociologist Franz Brentano , in a course on psychology and philosophy held in Vienna. Brentano greatly influenced Husserl’s philosophical formation and his decision to opt for philosophy. Edmund Husserl studied with Brentano for a short time; later he went to the Martin-Luther-University in Halle-Wittenberg.

There he was with Carl Stumpf (a former disciple of Brentano). It was then that Husserl wrote his work Über den Begriff der Zahl (On the Concept of Number) , in the year 1887. This work served as the basis for another, much more important work (in fact, his first important work): “Philosophie der Arithmetik” (Philosophy of Arithmetic), from 1891.

After several years dedicated to teaching, as we already mentioned, Edmund Husserl was removed from teaching due to the arrival of Nazism.

The first texts by Edmund Husserl are dated 1891; we find a work from that year entitled Philosophy of Arithmetic , where analyzes the origin and use of numerical symbols . In other words, it relates mathematics to philosophy.

Soon Edmund Husserl starts writing about philosophy (philosophical texts). He begins with them in the years 1900 and 1901, with “Logical Investigations”. With this text Husserl intended to determine an epistemological basis for philosophy; that is to say, he sought to have philosophy considered as a science . To defend this idea, Husserl relied on a method that he himself called “phenomenological”.

The work of Edmund Husserl is extensive . His complete works can be found in original manuscripts, consisting of more than 45,000 pages. They can be seen at the Institute of Philosophy of the Catholic University of Leuven, under the name “Husserl Archives”.

To see them, scholars come from all over the world. They are mostly people who study (or are interested in) phenomenology. In addition, many of their works are still being published and re-edited. On the other hand, they have been translated into many languages.

Titles of his works

It is a way of understanding philosophy, of describing the meaning of the world. It is based on a specific method, the phenomenological method , which describes phenomena as they appear in the consciousness; it then accesses the field of consciousness and subjects it to an intentional analysis.

The transcendental phenomenology of Husserl is a philosophical current that has influenced other authors and other outstanding figures in the intellectual field; they are personalities like Ortega y Gasset, Heidegger or Scheler.

Edmund Husserl died on April 27, 1938, in Freiburg, Germany . He was 79 years old. Previously, he had fallen ill with pleurisy, a disease consisting of inflammation of the pleura, usually caused by pneumonia.

Husserl spent the last months of his life dedicated to the revision and analysis of his texts. In addition, he continued to give lectures (in Prague and Vienna).

Husserl’s legacy continues to live on in the field of psychology and philosophy. His contributions to the field of phenomenology continue to be of notable academic interest. Moreover, his work was moved to Leuven (Belgium), as we have seen, where it can be consulted. Fortunately, the Nazis could not destroy it.