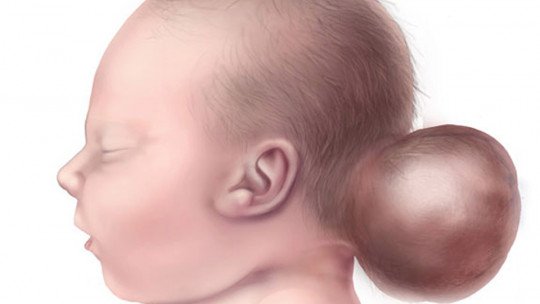 The skull is a bony structure that protects our brain very effectively from shocks and various injuries, and allows the brain to have a defined structure. The formation of the neural tube assembly takes place during the first month of fetal development, closing between the third and fourth week and allowing the brain to be protected by this bone cover.

However, in some cases the neural tube does not close properly, which may result in some of the material that should be protected being visible and accessible from the outside or protruding from what should be its protective cover. These are problems such as spina bifida or, in the case of the brain, encephalocele .

What is an encephalocele?

An encephalocele is a congenital malformation in which the skull does not close completely during fetal development, which causes some of the matter and substances that would normally be inside the cranial cavity to protrude through the opening, forming a lump or sac-like protrusion that contains it on the outside.

This means that the individual with an encephalocele may have part of the brain displaced towards the outside of the skull , which implies a high level of danger for survival due to possible injuries at the neuronal level. In fact, in many cases the foetus does not survive this situation, dying during the development process.

The symptoms that this problem will cause in the baby will vary greatly depending on the type of tissues outside the skull and the area where the opening in question is located.

Generally, the encephalocele presents a significant cognitive impairment and developmental delay, hydrocephalus and microcephalus (since part of the neural material expands on the outside), motor uncoordination in the voluntary muscles. It can also produce vision, hearing and smell problems, or even seizures.

Types according to the location of the protrusion

The protrusion may be located in different parts of the skull, but is common in all three areas listed below.

In this area the opening can be at different heights, including the nose, eye orbit or forehead. The majority of the sac does not usually include brain tissue , so it is one of the subtypes that has the least risk of nerve damage. However, it can cause significant visual and respiratory difficulties that can be life-threatening.

In the parietal areas the encephalocele tends to be linked to other malformations and neurological disorders , presenting almost half of the cases of intellectual disability. In addition, speech may be affected.

This is the most common type of encephalocele .

In this case a large proportion of those affected have normal intelligence or a mild disability, although it is much more likely that neural material will protrude than in the case of a frontal opening. Visual problems are frequent . It may also occur in the basal part of the skull.

Types according to protruded material

Another classification could be made based on the type of material protruding from the skull. In this sense we can find different types, such as the following.

In this subtype of encephalocele only the meninges stand out, so the risk is much lower than in other cases .

The material that protrudes is made up of the meninges and ventricles of the brain, which is more serious than in the previous case and is usually associated with the presence of hydrocephalus .

In this case, in addition to the meninges , brain matter also protrudes, which causes a greater risk of neuronal damage and the presence of diverse and more serious symptoms.

Part of the brain, including the ventricles , protrude out of the cranial cavity next to the meninges .

As with spina bifida, the causes of this disorder are a poor or absent closure of the neural tube during the first month of development. In fact, the encephalocele has sometimes been called “cranium bifida” , and is considered the same type of malformation as spina bifida, although at a cranial level. And as with this other disorder, the specific causes that cause the neural tube to fail to close properly during fetal development are largely unknown.

Despite this, it is considered that there is a link with low levels of folic acid during pregnancy (this being one of the factors most related to this disease), serious infections in the mother or the presence of high fever in this period or the consumption of substances. Although the possibility of genetic influence is also argued because families in which it has previously occurred may be at greater risk, this is not a determining factor.

Although the neurological consequences of the baby’s condition during its development are not curable, prevention and early treatment can help improve its situation and avoid further neurological damage.

Surgery is used to replace the protruding matter inside the skull and to seal the part that has not closed properly throughout fetal development. It is especially important to perform this surgery if there is an open lesion (no skin covering the sac) or if the sac makes it very difficult for the baby to breathe.

In some cases, although it depends on the type of material left outside the skull, the bumps may even be amputated. In the case of hydrocephalus, a surgical intervention will also be necessary to solve it.

In addition, the specific symptoms that the problem may have caused must be addressed. The encephalocele is a condition that does not have to be fatal. However, in some cases this condition may lead to the death of the child, in which case palliative care will be provided until the child dies.

Psychologically, it is very useful the presence of psychoeducation and advice to the child’s environment , since it is a condition that can generate painful sensations, fear and even sometimes feelings of guilt in the parents.

At the educational level, the special educational needs of individuals with cognitive impairments such as intellectual disabilities must be taken into account.

Bearing in mind that the causes of this type of malformation are unknown it is advisable to adopt preventive strategies that help to avoid this and other types of malformation.

As with spina bifida, giving folic acid during pregnancy, maintaining a balanced diet, and stopping the use of substances such as alcohol, tobacco, and other drugs greatly reduces the risk of the developing fetus having an encephalocele.