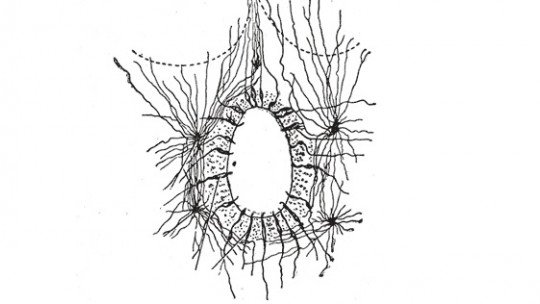 The functioning of the nervous system depends on a large number of specialized cells that, inside or outside the brain, are responsible for working together with the rest of the body to keep it functioning. The ependymal cells are one of the elements that play a key role in this .

Next we will see what ependymal cells are and how they relate to the activity of the brain and the nervous system in general.

Ependymal cells are a type of epithelial cell that is associated with the body cavities through which spinal fluid circulates. It is also part of the glial cells, which share space with neurons in the nervous system, although their function is not to transmit signals at full speed.

Thus, ependymal cells are part of a larger family of microscopic elements whose components include, for example, the microglia or astrocytes , all of which represent the neuroglia .

What is your function?

It is currently believed that there are two main functions of ependymal cells.

On the one hand, when they come together they create the membranes that keep the cerebrospinal fluid circulating through the ependymal canal of the spinal cord (a kind of conduit that runs along the spine) and the cerebral ventricles, preventing it from spilling into other tissues and passing to areas of the body where it should not be. In other words, they line the circulation spaces of this substance.

On the other hand, it is believed that ependymal cells make possible the creation of the cerebrospinal fluid itself, as we will see. This is very important, because although the latter is a relatively poor substance in terms of variety of valuable conennities for the cells (if we compare it with blood), it allows the whole nervous system to function well and to have extra protection against possible incidents.

What is spinal fluid?

This substance forms a kind of liquid mattress that directly protects many areas of the nervous system (which, let’s remember, is full of fragile and delicate parts) from shocks. By leaving a space between tissues in which there is a substance similar to water, the deformation produced by the impacts does not worsen the state of other areas so much : it acts as a firewall.

2. Serves to regulate the levels of substances

This fluid creates a medium in which various components that are rejected or needed by the body’s cells are expelled and captured. Thus, contribute to maintaining the balance of the correct functioning of the body .

3. Allows the capture of useful materials for the cells

In the cerebrospinal fluid it is possible to find elements that the cells can use as raw material to maintain their functioning, repair themselves, grow, etc.

The presence of ventricles with liquid forms a kind of “soft” skeleton that gives shape to this structure of the nervous system and allows it to be always more or less with the same disposition.

There are several types of ependymal cells, each with its own characteristics, location in the nervous system and way of functioning. These are tannins, ependymocytes and choroidal epithelial cells .

Tannocytes are ependymal cells that cover the walls of the third ventricle, deep in the brain, very close to a structure of the nervous system known as the diencephalon . Its main functions are believed to include propelling the cerebrospinal fluid through its thin extensions.

Ependymocytes are the most common and numerous type of ependymal cell, as they are present in both the ependymal canal and the cerebral ventricles . Their function is very basic: to create a relatively insulating barrier so that certain components do not pass from one side to the other, such as a microscopic membrane.

Choroidal epithelial cells, finally, form the type of ependymal cell that is responsible for forming the choroidal plexuses, the places where cerebrospinal fluid is produced, as well as creating a protective and insulating barrier.

Some alterations in these cells and in the tissues they form can cause disorders to appear which, in certain cases, threaten the life of the patients . For example, hydrocephalus, a medical condition in which too much cerebrospinal fluid is generated and the nervous system expands, putting pressure on the bone walls that cover it and damaging itself in the process.

Hypertension or cranial hypotension would be another example of what can go wrong with this system of ventricles of the nervous system, because failures in pressure can seriously interfere with nerve activity or even lead to death.

An important component of the nervous system

In conclusion, ependymal cells are an example of the extent to which the functioning of the nervous system is not only dependent on neurons. Around these nerve cells there are many others that, working in a coordinated manner, make it possible for the whole to do its job as it should. In this periphery of biological processes there is still much to be discovered.