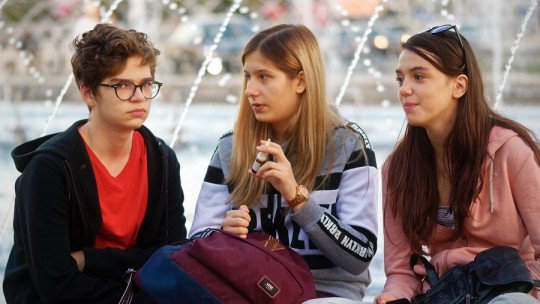 Adolescence is one of the most important life stages, a process of transformation and maturation at both the biological and cognitive levels that takes us from childhood to adulthood. It is a difficult stage for those who live it, full of new experiences and the search for an identity of their own.

But it is usually not only difficult for the adolescent, but also for the adults around them: adolescent behaviour and thinking, changing roles and possible but habitual rebellion towards authority often lead to minor conflicts.

Although it can be a complex stage for most people, it ends up not invalidating anyone’s day-to-day life. However, some people feel real fear, at an irrational level, when exposed to contact with teenagers. This is what happens in ephebiphobia , a condition we will talk about next.

It is called ephebiphobia or ephebophobia to specific phobia to adolescents and young people . It is a true but unusual phobia, which would be considered a specific type although it has a strong link to social phobia. Although technically, ephebiphobia should refer to adolescents, since its conception it has referred not only to that age but also to young people up to 35 years of age.

As a specific phobia, it involves the emergence of a powerful panic in the face of a stimulus or specific situation, in this case adolescents.

This fear appears in an irrational and exaggerated way in relation to the possible risk that the presence of what is feared implies, and the mere idea of being exposed to it generates such a level of anxiety that one can even suffer an anxiety crisis, appearing physical symptoms such as tachycardia, hyperventilation, tremors, hyperhidrosis and even the belief that one is dying, losing control of one’s body or even one’s sanity. In addition, this fear and anxiety are so strong that they lead the person to make active efforts to avoid as much as possible the stimulus he or she fears or situations or stimuli that may have been associated with it.

It is also worth mentioning that in addition to the fear itself, at a social level sometimes the tendency to think badly about youth and adolescence and the way they act nowadays, or to hate, despise, underestimate and reject youth without any cause, is also called ephebiphobia or ephebophobia, often in an irrational way and biased by stereotypes and prejudices (similar to what happens with homophobia or transphobia, for example).

Thus, not only does it have an effect at the individual level for those who suffer from it, but it can also lead to the development of discriminatory and even belligerent attitudes towards people at this stage of life.

Ephebiphobia is without a doubt a type of phobia that generates a great affectation to those who suffer it, and not only to this person but also can have implications at a social and community level .

The fact is that someone who has a phobia or hatred of young people and adolescents will tend to avoid them and everything associated with them. Thus, they will tend to avoid crowds and situations where there is an influx of youth, such as areas with high schools, educational institutions or leisure facilities such as discotheques.

Personal relationships can also be avoided, not only with adolescents and young people, but also with people who associate with people of these ages , such as families with adolescent children. To an extreme degree and especially if the reaction is one of panic, it is possible to become isolated and have difficulty even going out into the street, although this is much less frequent.

As we have also said, there is a social affectation, although in this aspect the reaction of hate, contempt and depreciation towards this sector of the population is fundamentally relevant: the achievements, contributions and ideas proposed by young people can be ignored and discarded regardless of their merits, and it can imply a reaction of rejection and discrimination towards young people at a social, professional and even academic level .

They may be given fewer opportunities and left out of relevant decisions regardless of their ability. The fact that this discrimination is picked up by young people themselves also means that they are less interested in becoming socially involved, something which in the long run and with an ageing population can even be dangerous for the community.

Possible causes of fear of adolescents

The causes of ephebiphobia are not completely known , although it is considered that there is not a single cause but a combination of factors that can influence its appearance.

To begin with, the phobia can be conditioned: it is possible that the person with ephebiphobia has suffered from some aversive experience that was the protagonist or associated with adolescence or youth. Thus, among the different causes we could find, for example, suffering from school bullying during adolescence or suffering from some type of abuse by a minor or a young person.

Another of the major possible causes of this phobia is found in the acquisition of a vicarious or learned conditioning on a socio-cultural level. This is because negative stereotypes of youth have often been internalized, both by the family environment and at the social level: young people are considered to be uncontrolled, not very responsible and far-sighted, violent and prone to risk and lack of respect and excess.

These prejudices are widespread and extend to all youth, provoking aversive reactions to their presence. In addition, the media are also involved, often and until relatively recently perpetuating stereotypes and the belief that young people are inexperienced beings, interested only in themselves or as something that should have a chance in the future but not now (sometimes for commercial interest).

Likewise, behind the ephebophilia there may be fear and rejection of social change and generational change , of losing one’s position and role to the new generations.

Treatment for this phobia

Treating ephebaphobia is possible, as with all other phobias. To begin with, exposure therapy is one of the most effective in the treatment of this type of problem : the person has to be exposed to the contact of what he or she fears, in a gradual way, so that little by little the anxiety decreases and he or she can move towards situations that generate a higher level of anxiety.

As far as stereotypes are concerned, exposure can also help to reduce them: mere exposure to groups about which there is prejudice can often make us able to link up with them and learn that preconceived ideas do not apply in all cases.

Another aspect that needs to be worked on, and in fact in great depth, is the cognitive aspect. Understanding what generates discomfort, fear or displeasure, why it is generated and what meaning it has for the subject can help to work on it, in such a way that it can contribute to modifying beliefs and ways of approaching reality in such a way that they become more adaptive and realistic. Psychoeducation and participation in joint activities with the feared population can also be useful, as can working with members of the environment who may be young people or adolescents and whose relationship with the subject may be deteriorated (for example, children or nephews).