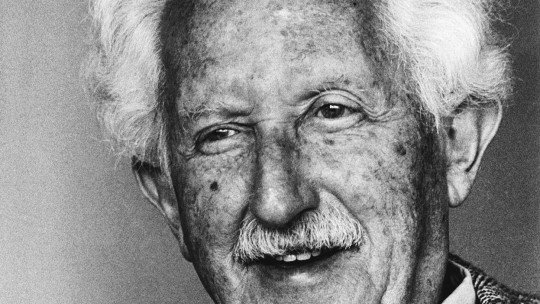 Erik Erikson is one of the most renowned psychologists for his contributions to the science of behavior . His theory, called “the psychosocial theory”, was developed from the reinterpretation of the phases of Sigmund Freud’s theory.

His theory consists of 8 stages and his ideas emphasize the understanding of the self and propose how the development of the personality is from childhood to old age. Erikson focused on the impact of culture and society on our development.

If you want to go deeper into his theory, you can read our article “Erikson’s Theory of Psychosocial Development”. In this post, however, we have listed some of his best phrases. Quotes that exemplify what his thinking was and represent his ideas. Don’t miss them!

This quote is similar to another well known one: “We are what we think”. That is, our behaviour is influenced by our thinking .

When there is a new member in the household, it conditions the life of the family members.

3. You have to learn to accept the law of life, and face the fact that it slowly disintegrates us

You have to accept things as they are. This is synonymous with emotional health.

4. Healthy children will not fear life if their elders have enough integrity not to fear death

5. A man’s conflicts represent what he “really” is

If we overcome the stages and the problems that arise in each of them, we will grow as people.

6. In the social jungle of human existence, there is no sense of being alive without a sense of identity

This quote refers to one of its stages: “integrity of self vs. despair”.

7. Doubt is the brother of shame

The third stage of his theory is called “initiative vs. guilt” . The child grows quickly. If the parents react negatively to his initiative, they will generate in him a feeling of guilt.

8. There is in each child at each stage of a new miracle of vigorous development, which constitutes new hope and a new responsibility for all

Hope motivates us to keep growing.

9. Life has no meaning without interdependence. We need each other, and the sooner we find out, the better for all of us

Human beings are social beings . We depend on others in some way to develop fully. This does not mean that we do not have autonomy.

10. When we look at the life cycle in our forties, we look to older people for wisdom. At 80, however, we look at other 80-year-olds to see who has wisdom and who does not. Many older people are not especially wise, but you get more reason as you get older

11. Every adult, whether a follower or a leader, a member of a mass or an elite, was once a child. He was once a child. A sense of smallness forms a substratum in his mind, indelibly. His triumphs will be measured against this smallness; his defeats will be based on it

One can become a leader, but once it was small.

12. You have to learn to accept the law of life, and face the fact that it slowly disintegrates

Life has a beginning and an end. You have to accept that.

13. Hope is the most indispensable virtue inherent in the condition of being alive

Hope is what moves us forward.

14. The more you know yourself, the more patience you have for what is seen in others

Self-knowledge is one of the keys to achieving emotional balance.

15. The only thing that can save us as a species is to see how we are not thinking about future generations in the same way we live

Human beings engage in behavior that can cause serious problems for future generations.

The development is cumulative. According to Erikson, we go through phases to grow .

17. One must carve out one’s own biography

We go through the stages as we overcome the various conflicts.

18. No one likes to be discovered, not even one who has made the ruthless confession of a part of his profession. Any autobiographer, therefore, at least between the lines, shares everything with his potential reader and judge

We all want to give the best image of ourselves and we keep things to ourselves.

19. Parents must not only have certain ways of guiding through the prohibition and permission, but must also be able to convey to the child a deep conviction that there is meaning in what they are doing

Education must make children people who can be critical in the future.

20. Children love and want to be loved and much prefer the joy of achievement or triumph to the hatred of failure. A child should not be confused by his symptom

Deep down, we all want to be valued positively by others.

21. The concept of psychosocial development basically refers to how the person’s interaction with his or her environment is given by some fundamental changes in his or her personality

Erikson’s theory is based on the idea that society and culture shapes our personality.

22. The way we understand history is also a way of making history

How we interpret facts and how we think determines our behavior

23. He who is ashamed would like to force the world not to look at him, not to realize his existence. He would like to destroy in the eyes of the world

A quote referring to his stage: “autonomy vs. shame and doubt” . Shame makes us self-conscious and affects our self-confidence.

To face the problems you have to have critical thinking. Otherwise, we can appear weak and avoid seeing difficult situations realistically.

True growth comes when we accept ourselves in both victories and defeats.

26. When you follow your development, your behavior is affected

As you grow up, your view of the world changes.

27. The psychoanalytic method is essentially a historical method

Erikson was a psychoanalyst who paid attention to the social and cultural processes in our development .

28. The more you know yourself, the more patience you will have for what you see in others

When you grow up, you value the really important things in life.

29. Men have always shown a low awareness of their best potentialities by paying homage to those leaders who taught the simplest and most inclusive rules for achieving a divided humanity

One usually plays down his virtues.

30. Life follows a process and it’s not forever. To understand it is to develop

Life has a beginning and an end. You have to accept it in order to be well.