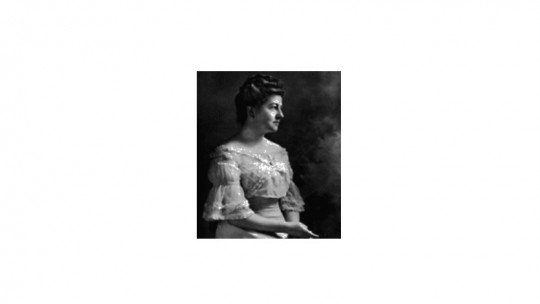 Ethel Puffer Howes (1872-1950) was an American-born psychologist who carried out various studies on the psychology of beauty and aesthetics, which represented one of the important steps in consolidating psychology in the experimental field and beyond philosophy.

In this article we approach the biography of Ethel Puffer Howes . A psychologist who, while developing in the experimental area, strongly questioned the difficulties of 19th and 20th century women in reconciling a life in marriage with an academic career.

Ethel Puffer Howes: biography of this pioneer in scientific psychology

Ethel Dench Puffer (later Ethel Puffer Howes), was born on October 10, 1872 in Massachusetts, United States, in a family that promoted higher education for women . Her mother was a professor and had received professional training at Smith College, which served as a guide for Ethel and her four younger sisters. As soon as she had graduated, Ethel Puffer began teaching mathematics at the same college, and at the same time, she developed a special interest in psychology. In this field Puffer was recognized by various academics and even associations as a pioneer psychologist.

As several of the psychologists of the time did, and in view of the recognition that Wundt’s experimental work was gaining, Puffer Howes moved to Berlin, Germany in 1895. To his surprise, he found that in Germany there was a greater exclusion of women in scientific psychology and laboratories.

In this context he met the psychologist Hugo Münsterberg, who showed interest in working with Ethel and her professional interests. Specifically, the psychologist was interested in investigating beauty and aesthetics from a social perspective. This interest fitted well with the process of consolidation of scientific psychology, since the subject of aesthetics had been concentrated solely in the field of philosophy .

For this same reason, he obtained a scholarship from the Association of College Alumni to do a doctorate with Münsterberg, who taught at Harvard, USA. She returned to Massachusetts and trained at the Radcliffe College, the women’s college annex. As with other women from the same era, Puffer completed her doctorate after completing the same tasks as her colleagues; however, she was awarded a degree in equivalent work.

Years later, Ethel undertook various actions to apply to Harvard for official recognition of her doctorate . In response, she and three other psychologists were offered a PhD degree by Radcliffe, which Puffer accepted. Her experimental research on aesthetics resulted in the publication of the book The psychology of Beauty in 1908.

Between marriage and scientific career

Later, Ethel Puffer taught at various women’s schools and in 1908 she married Benjamin Howes, a civil engineer she met after graduating from Smith College. In this context, something that seemed innocuous, such as acquiring her husband’s surname, caused Ethel various difficulties both to continue her development in science and to meet the expectations of the marriage.

Based on her own experience, Ethel Puffer was one of the first scientists who put into public debate the conflicts that women faced in order to make science and married life “successful” at the same time, that is, fulfilling the social and normative expectations of it .

As part of her marital commitment she had to move to a rural community because of her husband’s work , and among other things, this led her to reflect on the little compatibility between the burden of domestic activities and the intellectual demands of scientific psychology. This incompatibility also represented an important stressor for women who found themselves gradually giving up the ideals of professional training to which they had devoted years.

In short, Ethel Puffer questioned the demand to lead a “perfect personal life”; with the path of personal fulfillment, which generates different contradictions when the first corresponds to marriage and the second to a task already associated with masculine values: to do science. After spending several years of private reflection, Ethel took this discussion to science itself, in the form of research and different academic articles where she describes the tensions that women scientists went through and possible strategies to reconcile them, for example the development of nurseries and special services for working mothers .

Among his main works are “Accepting the universe” and “Continuity for women”, both from 1922. Among other things, he proposed to reform women’s professional conditions, without addressing the possibility of redefining marriage and the sexual division of labour.

Women who opted for higher education at the end of the 19th and beginning of the 20th century, lived an important tension between the public image of an obedient and submissive wife, and the silence of an “I” with desires and initiatives that corresponded to a sphere associated with opposite values . In the social imaginary, scientists were men, and women’s activity was more associated with private space.

Scientific activity, being associated with values opposed to those related to women, also meant their exposure to social sanctions related to scepticism about their abilities and the validity of their activities. The latter was distressing for women who were considered “atypical” for engaging in science and not staying at the limits of domestic space.