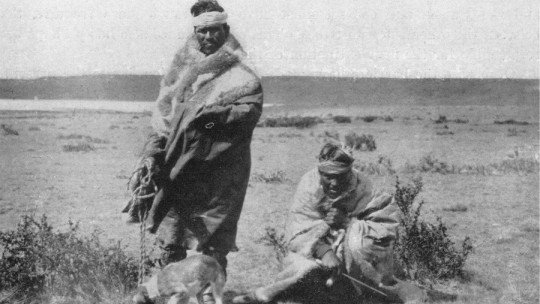 History, no matter how hard I try, is not a discipline detached from the context nor from the characteristics of the individual who studies it.

This is why many people believe that history, especially when dealing with non-Western cultures, has not been able to study them in a way that leaves aside the European vision.

With ethnohistory we have tried to correct this Eurocentric vision of the historical events of other cultures, trying to perceive the cultural reality of the ethnic group under study and seeing how they have perceived their own history. Let us look more closely at what exactly this field of knowledge consists of.

The term ethnohistory has a somewhat imprecise definition. The most accepted definition, and one which is closer to the name given to this field of knowledge, is that it is the branch that emerges from history and anthropology.

The objective of this study is to study the communities originating in a certain region from their own point of view , and how they perceived contact with other ethnic groups, whether in the context of invasion or trade.

Although this is the most accepted and basic definition for the term, there are many alternatives given for the word ‘ethnohistory’. The most complete definition, offered by Erminie Wheeler-Voegelin, a pioneer in the field, is that it is the study of the identities, locations, contacts, movements, customs and habits, cultural traditions and population itself of an ethnic group .

This definition has been the most widely used when studying communities that either no longer exist or have lost a significant percentage of their original territory, with the Mesoamerican indigenous communities playing an important role in the interest of ethno-historians.

According to Paul Radin in 1933, no culture can be accurately described without addressing in the most precise and close way how people who belonged to that same culture saw the world.

Seymour-Smith, in 1986, defines it as the union between the disciplines of history and anthropology , taking a closer look at how those who made up the culture perceived it, taking into account especially aspects such as local and popular history, and trying to avoid how it is described by the more dominant classes. Ethnohistory can be understood as the study of how people make a representation of their own history.

Gene Weltfish considers that ethnohistory is the discipline that deals with the study of ethnic groups throughout the time they lived, from the present to the earliest known moment of their existence, based on the interpretation of the written documents in which they are referred to. Special emphasis is placed on aspects such as the way in which they buried their deceased, proper names, testimonies of survivors…

Whatever the closest definition to what ethnohistorians really think and do, the truth is that it must be taken into account that this field of knowledge, which has not yet agreed on whether it is a branch of history and anthropology, an independent discipline, a method or a process, emerged as a critique of the traditional view of history when dealing with less favoured ethnic groups .

Ethnohistory, which emerged during the 20th century, although founded at a time when biological racism and many prejudices were being broken down, was intended to combat the paternalistic and supremacist view that remained among many scholars when it came to the history of Native Americans. As a discipline, history continued to take a very Eurocentric view in understanding the historical events of non-white and non-western cultures.

The ethno-historical proposal is based on the need to try to understand the history of a culture from its own vision, understanding the interpretation made by the members of the ethnic group in question .

Thus, taking the Cherokee, Iroquois or Sioux Indians as examples, the aim was to understand how they lived the conquest of the West and the expansion of the United States. As is known, there are many racist views of this event, showing the white settlers as heroes while the Indians, from whom the land was taken, were presented as the real enemies. The ethnohistory tries to change this vision, and to be more empathetic with the natives.

Although it is known that the term ethnohistory appeared at the end of the 19th century and Paul Radin, in 1933, tried to give it a definition, the first great step towards the formation and establishment of the discipline came from the anthropologist Erminie Wheeler-Voegelin in 1954. In that year, Wheeler-Voegelin published the first newsletter of the Ohio Valley Historic Indian Conference which, over the years, would become the magazine Ethnohistory , specialised in, as its name indicates, ethnohistory.

The emergence of this camp is due to the work carried out by anthropologists following the Indian Claims Commission in 1946. This commission was established to clarify which transactions, during the years of American expansion, had been fair . When the country was still young, white settlers bought land from the Indians, and many of these land purchases were, in essence, scams by the settlers on the Indians.

In order for the tribes claiming to have been cheated to be entitled to some form of compensation, it was necessary for them to be able to prove that they had occupied a certain territory. It is here that anthropologists played an important role, studying both in the library archives and in the civil registry and the very culture that claimed its share . This is what is considered the beginning of what would later become ethnohistory.

Over time, ethnohistory has not only studied the original indigenous groups of what is now the United States and Canada. Research has also been conducted on what Mesoamerican, indigenous Polynesian, and African tribal civilizations looked like and what rights they had.

Although not even the ethnohistorians themselves have agreed on whether ethnohistory is really a discipline, a branch of history and anthropology, a method or a process carried out during the study of the historical events of a given culture, what can be said is that as a ‘method’ they have in common the consideration of how the members of a given culture have lived the historical events .

As we have already mentioned, history has traditionally followed a view characterized by giving more weight to the opinion of Western historians than to those who come from other cultures and have lived those historical events first-hand.

Ethnohistorians use the legal record, especially library material and laws, as well as physical evidence such as monuments, architectural elements and everyday objects to find out how a certain culture lived and to prove that they actually lived in the place studied. The testimonies of those who managed to survive in the event of extermination or drastic population reduction are also taken into account.