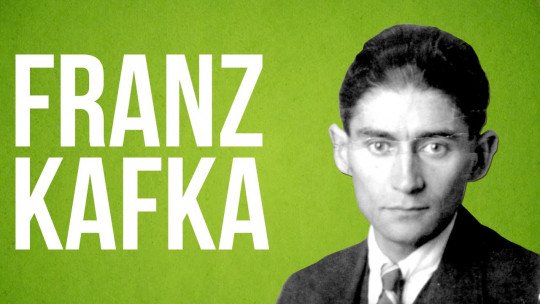 Of Jewish origin, Kafka’s work influenced great authors of universal literature, such as Jorge Luis Borges, Gabriel García Márquez, Albert Camus, Jean-Paul Sartre and Milan Kundera. Among his most read and memorable works are The Trial (1925), The Metamorphosis (1915) and The Condemnation (1913).

His literary style was associated with expressionism, magical realism and existentialism. In his novels he bears witness to a grey vision of the future and human life, largely influenced by the context of World War II and its probable schizoid personality disorder.

Phrases and aphorisms by Franz Kafka

In today’s article we will get to know the best famous quotes and phrases of Franz Kafka , to get closer to his literary and personal universe, to understand his work and his thoughts through several fragments of his books and letters.

Without further ado, we begin.

1. Every revolution evaporates and leaves behind a trail of bureaucracy.

It could well be a way of seeing politics as a mere game of mirages and wills that end up coming to nothing.

Enthusiasm and its strong link to feeling young.

3. Man’s gesture of bitterness is often only the petrified gazing of a child.

One of those phrases of Franz Kafka in which he summarizes a selfless philosophy.

5. All the knowledge, all the questions and answers are in the dog.

His favorite animal, all honesty and spontaneity.

6. Leisure is the father of all vices, and is the crowning glory of all virtues.

A duality difficult to express better.

7. Possessing does not exist, only being exists: that being that aspires to the last breath, to suffocation.

Having doesn’t mean anything.

Reflection always invites us to make more thoughtful and intelligent decisions, without being influenced by emotions.

9. Don Quixote’s misfortune was not his fantasy, but Sancho Panza’s.

About the work of Miguel de Cervantes: the worst thing that happened to Don Quixote is to know the reality of things, a stubborn, boring and lethal realism.

10. After a certain point there is no return. That is the point to reach.

Franz Kafka’s metaphorical phrase that can be applied to a multitude of circumstances.

11. Don’t despair, even for the fact that you don’t despair. When everything seems to be over, new forces arise. This means that you live.

One of his few phrases of optimism and hope.

12. Literature is always an expedition to the truth.

Despite being works of fiction, there is a lot of reality in every story that is told.

In the hope of belief lies vitality, according to Kafka.

14. If the world opposes you, you must side with the world.

You’re probably wrong, or at least it should look like you’re not. Pretend.

15. Simply do not overestimate what I have written; otherwise what I still hope to write would become unattainable.

A way of effectively valuing their achievements, to strive for even higher levels.

16. I must confess that I once envied someone very much because he was loved, cared for, defended from reason and force, and because he lay in peace under the flowers. I always have envy at hand.

17. A book must be the axe that breaks the sea ice inside us.

About reading and its powers.

18. Each man has a room. It’s a fact that confirms our own hearing. When we walk fast and listen, especially at night when everything around us is silent, we can hear, for example, the shaking of a badly hung wall mirror.

An interesting reflection on human perception.

19. It is a blow because it will take up time and I need all the time and a thousand times more, preferably all the time that exists, to think of you, to breathe in you.

One of his letters to Milena.

20. He who seeks does not find, but he who does not seek is found.

In order to find, we must be attentive, but without falling into obsession.

21. It is often safer to be in chains than to be free.

Another sentence by Franz Kafka in which we glimpse his shy spirit.