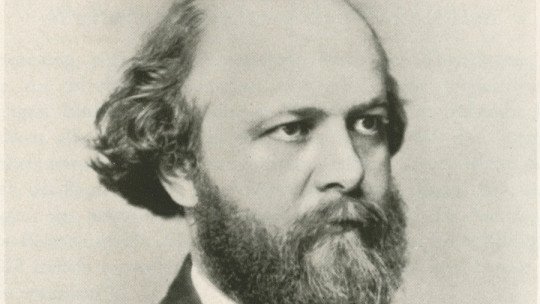 Friedrich Albert Lange was a German philosopher known for his attempt to compile the entire history of materialism up to his time and, in addition, for proposing reforms in the German educational system.

Not only did he spend his life between the classrooms of the Gymnasiums and German universities, but he also devoted himself to the political struggle by working in opinion newspapers critical of how German unification was taking place.

Next we will see a biography of Friedrich Albert Lange , as well as entering into more detail about his thoughts on how the educational process should be given.

Friedrich Albert Lange was born on September 28, 1828 in Wald, present-day Alemani a. He was the son of a Protestant theologian and dogmatic writer Johann Peter Lange. As a child he moved with his family to Langenberg in 1832 and then to Duisburg. Then, in 1841, he would go to Zurich, where his father would take over the position of professor of theology left vacant by David Friedrich Strauss. Lange would study philology and theology in Zurich, especially the doctrines of Hegel and Herbart, besides being interested in Kant while he was there.

In 1898 he moved to Bonn to study at his university , where he would pursue higher studies in philosophy, German literature, analytical geometry and calculus. In 1851, he received his doctorate in metrics.

After doing his military service in Cologne, he became a teacher at a high school in the same city and, from 1955, he joined the faculty of the University of Bonn as a “privatdozent”. In 1857 he began to give lessons on materialism, but since he was unable to improve his teaching position in Bonn and his lectures on pedagogy were not very successful, he decided to return to Duisburg and work at its Gymnasium.

In Duisburg he would teach Greek, Latin, German and philosophy between 1858 and 1862, and it was during this period that he would write several pedagogical articles for Karl Schmid’s Enzyklopädie des gesammten Erziehungs und Unterrichtswesens .

But the life of Friedrich Albert Lange is not merely academic. He also developed an important political activism, getting involved in the new consumer cooperatives and in support of the unification of Germany .

He worked for several months as co-editor of the liberal newspaper “Rhein und Ruhrzeitung”, which was critical of Otto von Bismarck. In 1866 he joined the International Workers’ Association , which would become known over time as the First International. A year later he published the first edition of his “History of Materialism”.

In 1869 he joined the University of Zurich, where he was appointed as a professor. However, he later moved to Marburg to pursue the same profession. While he was there in 1872, he was already showing signs of illness, a cancer that would be responsible for his death on 21 November 1875 .

It should be noted that despite his last years of illness, this did not prevent him from working on his work, trying to finish in the second edition of “Historia del materialismo”, which would be published in two volumes in 1873 and 1875.

The pedagogy of Friedrich Albert Lange

Lange was always very interested in the theoretical questions about what the purpose of education should be , and what the best method to realize it was. In fact, even before he became a teacher in a Gymnasium in Cologne he was already thinking about what the method of reforming the German educational system of his time should be.

He was particularly concerned about the importance being given to the classics, too much so, in his view, while ignoring the study of the natural sciences , which were becoming increasingly important.

Despite her interest in this issue, and even having contributed to articles on pedagogy in Karl Schmid’s Encyklopädie des gesammten Erziehungs- und Unterrichtswesens , Lange does not seem to have had a great impact on her contemporaries or on the history of pedagogy , even though her view of it turns out to be something really interesting. When he started working as a “privatdozent” at the University of Bonn, he tried to give lectures on pedagogy, but unfortunately did not succeed in generating much interest in his students.

However, there are those who consider that this initial lack of interest in Lange’s pedagogy was somewhat temporary, given that many great German thinkers contemporary to this philosopher claim to have been influenced by his work . Among the most notable are Max Weber, Friedrich Paulsen, Paul Natorp and Hans Vaihinger.

Friedrich Albert Lange stated that the purpose of education should be to make students become rational and culturalised people once they reach adulthood . To do so, it was necessary to look back at the history of both education and pedagogy, and thus obtain the keys to achieving such a purpose. With the history of education, it would be possible to understand the way in which social, political and cultural conditions interact in such a way that they generate specific types of educational environments.

In order to achieve free citizens who act with great leadership it is necessary that the teachers themselves feel actively involved in their community . That is, teachers should not find themselves isolated from the political situation that they are experiencing or from the socio-cultural context that is taking place in their town or region. Only those teachers who are politically involved will be able to foster in their students a love of freedom and an appreciation of the mother country.

Friedrich Albert Lange considered that a crucial aspect in a society that allowed free thought was that every social entity should have the right to decide what is to be taught in school . However, this does not mean that any kind of ideology should be allowed. Lange considered that the state should restrict the emergence of which school in case what is taught poses a real threat to the legitimacy of the state or promotes criminal activities.

While Lange considered Christian values to be an essential part of education, he also believed that there should not be a single, predetermined religious instruction for all German schools. He considered that each school, and in the same way with respect to free thinking and the subjects to be taught in class, religion should be chosen by those entities that were behind the opening of the school.

Lange considered Christian values to be an essential part of education, although he would later give greater importance to the idea that philosophy had an important role to play in achieving an effective educational process. Furthermore, he ended up considering that the Christian religion should not be imposed, but rather

In Lange’s pedagogical method it is argued that a balance must be sought between the student’s natural talent , i.e. those strengths he or she demonstrates, and the social stimuli from his or her family and community environment. It considers that the environment plays a significant role in the type of learning that the student demonstrates, and can help him/her to know how to focus and direct his/her learning abilities, especially in what he/she is good at.

He is critical of social Darwinism, since he believes that there is no need to pay attention to the barriers to development created by socio-economic inequalities.