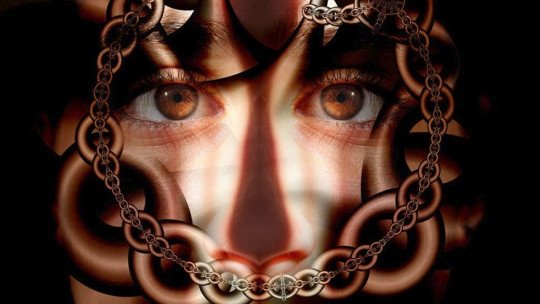 In the medical and psychological literature, we find mentions of Ganser syndrome, a very rare mental disorder characterized by symptoms such as approximate answers to simple questions, complex hallucinations, and conversational phenomena.

In this article we will discuss the causes and symptoms of Ganser syndrome .

What is Ganser syndrome?

Ganser syndrome is a very rare clinical picture that was first described in 1898. The name given to this phenomenon comes from that of its discoverer: the German psychiatrist Sigbert Ganser. We also find the terms “hysterical pseudodementia”, “pseudo-dementia syndrome” and “prison psychosis” .

The latter name refers to the fact that Ganser syndrome has been identified more frequently than usual in prison populations. In most of these cases, the symptoms are most likely an attempt to receive better treatment from prison staff or other inmates.

The most characteristic symptom of Ganser syndrome is the para-answers or approximate answers; these are failed answers but relatively close to the truth that are given in response to simple questions. The rest of the signs in this table include conversive phenomena, ecophenomena and apparent alterations in consciousness, among others.

The few available prevalence studies indicate that Ganser syndrome appears more commonly in men than in women , at a ratio of 3:1. The average age of diagnosis is somewhat above 30 years, although it sometimes occurs in children. However, very little is known about this phenomenon because of its extreme infrequency.

Ganser syndrome has traditionally been classified in the category of factitious disorders, which are characterized by the feigning of an illness to achieve a “patient role” . The other typical phenomenon of this class is the Münchausen syndrome, in which the person feigns illness or psychological trauma in order to obtain social reinforcement.

In this respect, a distinction must be made between factual disorders and simulation. In the vocabulary of clinical psychology and other related disciplines, the term “simulation” is used to refer to cases in which an illness or mental disorder is faked with an objective other than obtaining the role of patient, such as economic benefit.

The understanding of Ganser syndrome as a dissociative disorder is widespread, so it would be more similar to phenomena such as depersonalization, de-realization and dissociative amnesia. Dissociative experiences consist of separations of cognitive processes (including consciousness) that arise in reaction to stress.

However, at present the most accepted explanation of the causes of Ganser syndrome defines it as a disorder of a psychotic nature . In this sense, the association of this clinical picture with schizophrenia, intoxication by alcohol and other psychoactive substances and severe depressive disorders should be highlighted.

Para-answers, conversive symptoms, alterations of consciousness and pseudo- hallucinations are the four most defining features of Ganser syndrome. It is also important to highlight the ecofenomena, which occur with some frequency in this clinical context, and the high levels of stress and anxiety that are detected in these people.

The para-answers consist of answers that are relatively close to reality that are given to questions that are easy to answer. In many cases, Ganser’s syndrome is conceptualized around this peculiar manifestation; in fact, the DSM-IV manual places approximate answers in the core of the criteria for the diagnosis of the condition.

Conversion consists of the presence of physical symptoms, such as pain or sensory and motor deficits, in the absence of an identifiable organic cause . Conversion disorder is currently being questioned; the DSM-5 includes it in the category “somatic symptom disorders”, which also includes factitious disorder, among others.

The two symptoms related to the level of alertness, and therefore consciousness, that appear most commonly in Ganser syndrome are the feeling of mental confusion and the loss of personal identity . In general, people with this clinical picture may have difficulties in reacting to environmental stimuli and in processing them.

People with Ganser syndrome often report elaborate hallucinations in any sensory mode. Since in psychiatric disorders such as schizophrenia the hallucinations are usually auditory and simple, these types of accounts may serve as a clue in the diagnosis of this rare syndrome .

Eco-phenomena or ecosymptoms are behaviours of imitation or repetition that occur without the subject’s voluntary control. The environmental stimuli that are reproduced can be actions (ecopraxy), verbalizations (echolalia) or facial expressions (ecomimia), among others.