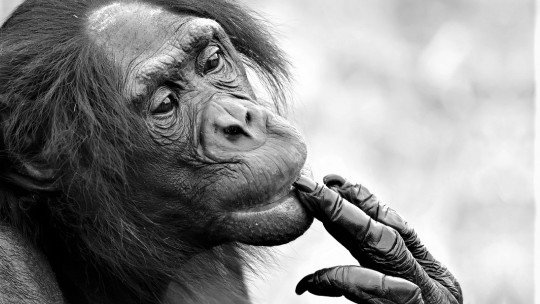 One of the most important debates when dealing with the evolution of human intelligence consists of whether we humans have developed a single general intelligence (or g) or, on the contrary, an intelligence divided into a set of specializations.

Some of the literature attributes the former to humans and the latter to non-human animals, but as always in science, not everything is so simple and there are studies that provide data against this idea.

Based on this debate, Judith M. Burkart and her colleagues at the University of Zurich prepared, in 2017, a review in which they evaluate the presence of g in non-human animals and explore the implications of this on theories of the evolution of cognition.

How is the intelligence of humans and animals?

In humans, we can understand intelligence by the ability to reason, plan, solve problems or think abstractly, among other abilities. In animals it has been defined rather by the ability to acquire knowledge of the physical or social environment and use it to solve new problems.

But what does it mean that a species has general intelligence? On an empirical level, we speak of general intelligence when individuals of the species score similarly on different types of cognitive tasks (such as causal reasoning or social learning tasks), giving rise to the famous g factor. Or, in other words, that there is a significant correlation between some scores and others.

This is what is known as a positive manifold, and it is the great argument for the presence of g in humans. Another is the correlation of g with brain size, volume of grey matter and cortical thickness, as well as success at school and at work, among others. In summary, the presence of a general intelligence in humans is represented by the g factor and finds support in both neurobiology and in characteristics of the life of individuals.

The alternative, or perhaps complementary vision of general intelligence is to speak of modular intelligence. An intelligence based on specialized modules for different cognitive skills. The evolutionary basis behind this concept consists of considering these modules as cognitive adaptations to problems that have been repeated over a long period of time in the course of the evolution of a species.

Under this context, solutions to these problems would have been channeled through natural selection. An example would be for a species to develop a large spatial memory when it has historically needed to find food in large and complex territories. Therefore, according to this vision, human and animal minds can be considered as a set of specializations that emerged in response to specific environmental problems.

In the past, a very strict modular mind concept was advocated, with modules, or independent intelligences that process information with different “input channels”. This view is totally incompatible with the presence of a general intelligence in the same individual. However, recently many authors propose the compatibility of these modules with a “central system” of information processing and, in turn, with a general intelligence.

But if this central system has only been demonstrated in humans, the key question concerning the evolution of general intelligence would be how it has emerged, during the course of human evolution, above the previously existing modular system. To answer this question it is necessary to investigate the cognitive characteristics of non-human animals.

The vast majority of studies that have attempted to find g in non-human animals have been conducted primarily in rodents and primates, especially great apes. In rodents the presence of g appears to be quite robust, with studies examining up to 8 different tasks in mice and rats. For non-human primates, results have been rather mixed:

Some studies, mainly focused on chimpanzees, have found alternatives to the g-factor to explain the intelligence of this species. One example is that of Esther Herrmann and collaborators who, applying similar intelligence tests to chimpanzees and human children, find that intelligence is organized differently in different species. The children’s performance was best explained through three different modules, or intelligences (spatial, physical and social). On the other hand, “chimpanzee intelligence” was better explained through two factors: one spatial and a second one that grouped both physical and social tasks).

Later studies like the one by Herrmann and Call and Amici and collaborators find similar results (no presence of g) in chimpanzees and at interspecific level, respectively.

In contrast, other authors have defended the presence of general intelligence in chimpanzees after finding shared characteristics with humans. William D. Hopkins and collaborators at Georgia State University found that intelligence is largely inherited in chimpanzees. In addition, the g factor has been linked to larger brains and greater cortical thickness in this species, and Beran and Hopkins found a strong correlation between g and scores on self-control tasks.

So how has general intelligence evolved?

The fact that most studies support the presence of general intelligence in rodents and primates leads us to consider that it has been developed in some lineages above or, perhaps at the same time, that specific adaptive capacities, theoretically easier to shape by natural selection.

Here a component comes into play that has been seen to be directly correlated to general intelligence: brain size. Just as specific abilities (however sophisticated they may be) have not required a great deal of brain expansion, it seems that those species that possess more general intelligence have needed a significant increase in brain tissue.

But, what are the conditions that have led these species to possess these capacities? One proposal that tries to answer this question is the cognitive buffer hypothesis, which considers innovation and learning as two main engines to develop a general intelligence. Based on this idea, species whose environment often changes or becomes unpredictable would have required a general intelligence to cope with unusual or changing ecological difficulties. Examples in favour of this theory would be the correlation between more innovative and more G-bearing species in primates, or the fact that a higher proportion of ‘colonising success’ has been found in species with more large brains (including birds, mammals, amphibians, reptiles and fish).

If we believe this hypothesis, it would be logical to ask ourselves why not all species have ended up developing this intelligence that would allow them to adapt to all types of environments. Well, the answer lies in the great costs involved. The brain expansion required for this type of adaptation entails an enormous energy cost (remember that in humans the brain can consume up to 20% of the energy required by the entire organism), which also requires a slowdown in physical and brain development at the ontogenetic level.

Under these conditions, only species capable of providing special and lasting adult care for the young would be able to afford such slaughter. In this scenario, both the absence of constant predators that threaten the survival of the adults and the alomaternal care (care of the offspring by, in addition to the mother, other individuals in the group) that many species, especially primates, have would play an important role.

This explanation coincides with Michael Tomasello’s well-known hypothesis of social intelligence in giving importance to social learning and making it largely responsible for the brain expansion and high cognitive capacities of the human species.

In conclusion, this review leads us to accept (or at least consider) the compatibility between specialized cognitive abilities and general intelligence. At this point it would perhaps be more interesting and accurate to ask ourselves which skills emerged through specialization and which are the result of later adaptation thanks to the cognitive flexibility that accompanies general intelligence. In this direction, and as always in science, more comparative studies are needed to understand when and why it evolved g.