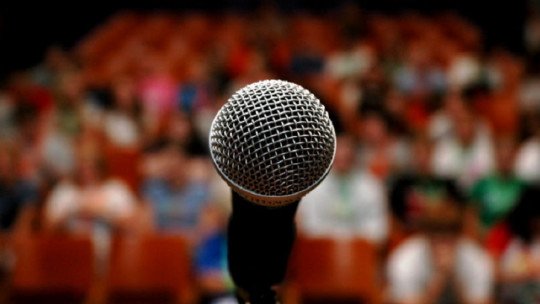 We found ourselves standing in front of a room full of people looking at us and waiting for us to talk. If we don’t turn out to be very daring people, this situation may turn our stomach a little.

This reaction is perfectly normal, as the pressure of public speaking can be unsettling. However, when this restlessness turns into fear we may be faced with a case of glossophobia .

The term glosophobia comes from the union of the Greek terms “glossa” which is translated as “language” and “phobos” which corresponds to “fear”. Although at first glance it may not offer any clues as to what glossa is, it is a specific anxiety disorder in which a person experiences fear of the action of public speaking.

Although it is normal to get nervous when we have to talk in front of many people, in glossophobia the person experiences an excessive, irrational and uncontrollable fear of such situations . This exacerbated fear causes the person to experience abnormally high levels of anxiety every time they have to speak in public, so they always tend to avoid these situations.

Although in many cases, glossophobia is part of a much broader social phobia, it doesn’t always have to be. In addition, there are essential differences between these two types of specific phobia.

Unlike social phobia, in which the person manifests an excessive fear of practically any type of socialization, glossophobia is a situational phobia that only occurs in the specific context of having to speak in front of an audience , even if the audience is known or small.

As mentioned, the experience of some nervousness or fear when speaking in public is completely natural; but when this fear prevents the person from carrying out such activity it may be glossophobia. Furthermore, there are certain characteristics that distinguish a phobic fear from a normative one :

In addition, in the case of glossophobia, the anxiety response experienced by the person is so high that it is completely impossible for them to speak in public , to the point of fainting if they are forced to do so.

As a result, they tend to avoid such a situation, which may even interfere with their work or academic life, since it is quite likely that at some point they will be required to do so.

As mentioned above, glossophobia is an anxiety disorder and therefore the symptoms respond to a clinical picture of this type of condition.

Although each person may experience different symptoms and with different intensity, the symptomatology that distinguishes both glosophobia and other phobias is manifested in three different categories: physical symptoms, cognitive symptoms and behavioral symptoms.

When the person faces or thinks about facing the phobic stimulus, in this case having to speak in public, there is a hyperactivity of the central nervous system that causes a great amount of changes and alterations in the organism. Among these symptoms are:

The physical symptoms are provoked and accompanied by a cognitive symptomatology that is distinguished by presenting a series of irrational beliefs and ideas about the things that can happen when the person is speaking in public.

Ideas such as that he will be humiliated, that he will not be up to the circumstances or that the rest of the people will notice the anxiety he is experiencing are very recurrent thoughts that invade the mind of people with glosophobia.

These cognitive symptoms manifest themselves through the following ideas or thoughts:

Finally, these symptoms are accompanied and manifested through a series of behavioral symptoms that appear as a response to the stimulus or aversive situation, these behaviors are intended either to avoid the situation or escape.

All those behaviours that are carried out with the aim of avoiding or avoiding the possibility of having to speak in public with so-called avoidance behaviours. For example, the person with glossophobia may falsely claim that he has become ill in order to have to go to an appointment where he knew he had to speak in public.

On the other hand, all those behaviours that are carried out once the feared situation has started are called escape behaviours and although in glossophobia they are not so common, they allow the person to escape from the phobic situation as quickly as possible.

In many cases, it is practically impossible to determine the concrete origin of a phobic fear, since the person himself is unable to remember or determine what has caused it .

However, in most phobias, a genetic predisposition to the effects of stress and anxiety, coupled with traumatic or emotionally charged experiences related to the feared stimulus, are the perfect breeding ground for the development of a phobia.

Since glosophobia can be highly disabling, it is highly recommended that people who suffer from it should see a specialist in psychology or mental health . Fortunately, there are treatments that can notably reduce the intensity of the symptoms and even eliminate them completely.

Through techniques such as live exposure or systematic desensitization, the person gradually faces the feared exposure. So if they are accompanied by training in relaxation techniques and cognitive restructuring, the person can overcome their phobic fear and carry out this activity in a normal way.