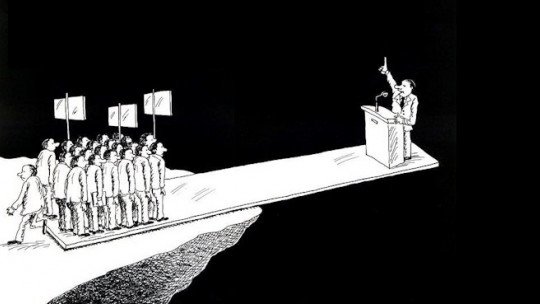 The human being is a gregarious being by nature . As such, he is subject to interaction with other people, who have their own views on the reality of the world around them. For this reason, the opinion of the community has always been a reference for guiding one’s own conduct.

Currently, one of the ways to be aware of the opinion of communities is through the media, which allows them to be informed through elements such as opinion polls of the beliefs and visions of citizens on specific issues. These opinions cause various effects in those who receive them, including two opposing ones: the Bandwagon effect and the Underdog effect .

We’ll see what they are, but first, let’s see exactly what an opinion poll is.

What is an opinion poll?

A public opinion survey is considered to be a consultation carried out with people chosen according to statistical principles, being an essential tool for evaluating public opinion .

The functions of this type of consultation are to produce knowledge, to optimize decision making based on the opinions of others, to inform about the beliefs of our fellow men and to have the possibility to use them in a propagandistic way.

The results of the surveys will reflect different assessments depending on the subject matter; among these opinions there may be one that is clearly popular.

It is in this context that the Bandwagon effect appears, according to which people tend to support those causes that we consider to be winning .

The Bandwagon effect is based on the need to be consistent with society as a whole, to be part of the group and to make a personal statement in supporting what we believe is most likely to succeed. In this way, the individual feels that he is a winner, reinforcing his self-esteem and his feeling of belonging to a strengthening collective.

When does the Bandwagon effect appear?

Apart from its use as part of various persuasion techniques, studies indicate that this effect occurs when there is a very clear polarisation in favour of one of the options for action or decision.

It occurs especially in individuals with a high level of extraversion and neuroticism, in circumstances where information on the subject in question is limited and biased by the dominant opinion. Individuals who are undecided about which option to choose also tend to vote for the option presented as the winner unless other variables come into play .

However, it should be borne in mind that knowledge of the attitudes of the majority as captured by mechanisms such as opinion polls can bias individual freedom, causing a kind of learned helplessness and making the viewer believe that if his or her action or thought is different from the majority, it will not have any impact. As a reaction to this, in some people there may appear weariness and disenchantment towards the majority position , appearing in turn a feeling of sympathy towards what we consider a losing cause.

The effect mentioned above in which the opinion of the majority provokes a rejection and a sympathy for the minority is the Underdog effect . In this effect, the decision taken will be the one that benefits the option that is perceived as the least valued. Thus, the least valued option is considered to be unfairly attacked or undervalued, which leads to its defence.

The causes of the Underdog effect can be multiple, such as an attempt to differentiate oneself from the rest , sympathizing with the situation of the “lost cause” or admiring the other’s willingness to oppose the majority.

Their influence on social movements

Both the Bandwagon effect and the Underdog effect are guarantors of the emergence, maintenance and disappearance of social movements. It must be taken into account that the opinion of our peers is relevant when talking about changing attitudes.

While as a general rule, as studies show, majorities do not require a great deal of time or effort to direct the attitude of individuals, as they tend to try to reinforce their sense of belonging to society through conformity to social norms, minorities need a long period of time in which they need to maintain internal coherence and consistency in their demands in order to bring about a change in attitude in others.

First, some members of the majority group perceive that the defendant is fair and change their perspective. Later, this change causes others to follow suit and finally the former minority opinion expands .

The case of the feminist and anti-racist movements

These groups were initially opposed by the majority of the population. However, the internal coherence, constancy and consistency over time of their demands caused some of the individuals who supported the dominant opinion to change their opinion (initially producing an Underdog effect). Over the years, the trend has been reversed, with the formerly disadvantaged attitudinal tendency becoming the majority and the acceptance of the rights of the groups being favoured through a Bandwagon effect.

However, although, as we have just seen, these effects can be applied in a positive way, knowing of their existence can also cause them to be used in a selfish way.

Knowledge of the Bandwagon and Underdog effects has meant that in many cases they have been targeted for very specific purposes. One of the dimensions in which the study of these effects is most often applied is in politics, from which an attempt has been made to use both the media and opinion polls in a propagandistic manner , as it is considered that knowledge of the opinion of others will modify behaviour and beliefs in the desired direction.

Politicians are aware that, often, the publication and dissemination of favorable surveys strengthens the morale of their party members, while increasing the number of supporters.

To this end, the different political options will try to present opinion surveys as favourable as possible to their proposal (given the greater ease with which the population associates itself with the majority opinion), presenting them in the media so that the vision that their proposal is the one that is going to be the winner, or at least the one that is on the rise, is expanded.

This fact could help to explain why, after the election results and regardless of what they are, all political forces claim to be winners before the media. The aim is that the subjects that are not totally in line with their positions change their attitudes in order to join and feel part of the social majority. As we have seen, throughout history the Underdog and Bandwagon effects have appeared and/or been applied by influencing the masses. In the case of the manipulative use of these phenomena , they are usually applied through opinion polls with the purpose of taking advantage of their performative character (that is, their ability not only to describe an event but also to create it, since since since the polls are disseminated they participate in the formation and change of attitudes), in order to direct public opinion towards a specific objective.

However, it should be noted that the fact that surveys can have an influence does not imply that they will do so in the intended direction . Presenting an event as a winner may bring others closer to it, but depending on the way it is presented it is likely to produce rejection. What surveys change is the climate of the situation, by giving a general impression of how the situation can work and whether we have any control over it.

Also, considering that we are currently in the information society and that through the networks and new technologies we have access to a large number of visions and points of view, it is more difficult for these effects to be very effective; especially considering that society is increasingly critical and selective with the information it is offered, being more and more aware of the possibility that it may be manipulated.