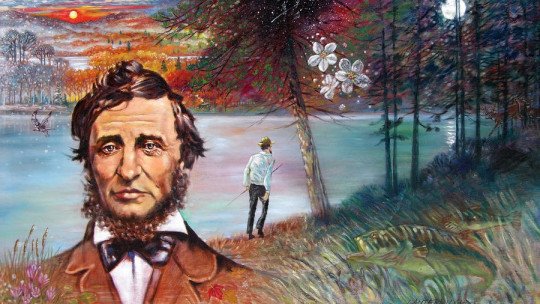 Henry David Thoreau (Massachusetts, 1817 – 1862) was a writer, philosopher and thinker who made a great impact on the intellectual world of his time and on subsequent generations.

His most acclaimed books, Walden (1854) and The Civil Disobedience (1848), in which he brilliantly exposed different moral foundations that would take root in the leftist currents of the following decades.

Phrases and famous quotes from Thoreau

During his lifetime, T horeau opposed American slavery and promulgated very advanced ideas for that time of war , violence and scarcity. In fact, such central figures in American history as Martin Luther King himself acknowledged that they were strongly influenced by the figure of the writer.

In today’s article we will know the best phrases of Henry David Thoreau, to approach his thought and his exceptional prose.

1. You are more aware than before of what is important and what is trivial. The future is worth waiting for!

A positive phrase from the great Henry David Thoreau.

2. There are moments when all the accumulated anxiety and effort are calmed down in the infinite indolence and repose of nature.

There are different types of anxiety and, as Thoreau says, sometimes we are able to alleviate it in a real phase of catharsis.

3. I went to the woods because I wanted to live deliberately; to face only the facts of life and see if I could learn what she had to teach. I wanted to live deeply and discard everything that was not life… So as not to realize, at the moment of death, that I had not lived.

One of those philosophical quotes that invite us to reflect.

4. The law has never made men more just; and because of its respect for them, even the best disposed become daily the agents of injustice.

In this quote he reveals his anarchist side.

5. What a man thinks of himself, this is what determines, or rather indicates, his fate.

Our self-concept is more powerful than we usually think.

6. Math doesn’t lie, there are many lying mathematicians.

Statistics can always lead to wrong conclusions if we do not know how to interpret them properly.

7. The richest is he whose pleasures are the cheapest.

An ode to the austerity very typical of the great Thoreau.

A sad phrase that contains a truth that endures in our times.

9. How vain it is to sit and write when you have not yet risen to live.

A reflection on the writing profession. If you have not experienced, your texts can be totally empty.

10. There is more religion in the science of man than science in his religion.

What does science think of religious people?

11. Most men, even in this relatively free country, are so preoccupied with unnecessary artifices and absurdly mediocre work that they have no time left to reap the best fruits of life.

Another phrase from Henry David Thoreau about superficiality and ostentatious living.

12. Nine-tenths of wisdom comes from being judicious in time.

Famous phrase where he explains his notion of responsibility.

13. You could define heaven as the place that men avoid.

A thought that induces us to reflect on good and evil.

14. There is no worse smell than that which gives off corrupt goodness.

When a good man becomes corrupt, his honor, carved out by years of honesty, fades away without the possibility of amendment.

15. Is democracy, as we know it, the ultimate possible achievement in government? Is it not possible to take a further step towards the recognition and organization of human rights? There can never be a truly free and enlightened State until it recognizes the individual as a superior power, independent of the one from which he derives his authority, and consequently treats him accordingly.

A political reflection that has generated rivers of ink from the 19th century to the present day.

16. It’s as hard to see yourself as it is to look back without turning around.

Our capacity for self-reflection is certainly limited.

17. No human being, passing the irrational age of childhood, will consciously want to kill some creature that maintains his life on the same earth as he does.

An animalist phrase that perhaps today is not surprising, but in its time it meant a radical look at the life of living beings.

18. Time is nothing but the current I’m fishing in.

One of these reflections on time that leaves us thinking for hours.

19. The light that blinds our eyes is darkness to us. It only dawns on the day for which we are awake. There are still many days to dawn. He alone is but a morning star.

You were looking for philosophical phrases? This famous quote from Thoreau is for framing.

20. If you can’t convince a person of the evil he is doing, then try to do the good. People believe only what they see.

Ethics are preached by day-to-day actions.