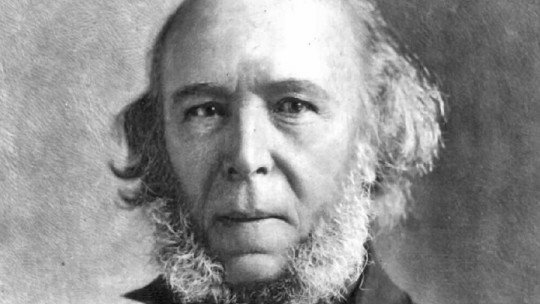 Herbert Spencer (1820-1903) was an English philosopher and sociologist who made an important case for liberalism from the perspective of social Darwinism. His theories significantly influenced the economy and the theories of government in the 20th century.

Below is a biography of Herbert Spencer , as well as his main works and contributions.

He is recognized as one of the most representative intellectuals of the Victorian era, as well as one of the main exponents of the theories of evolution applied to sociology , and of individualism. With a strong conviction, Spencer defended the importance of examining social phenomena from a scientific perspective.

On the other hand, in the pedagogical area Spencer emphasized the importance of personal development, attention and empathy from the instructors, observation and problem solving, physical exercise and free play, as well as learning from directly experiencing the natural consequences of the acts (beyond the punishments imposed by the teachers).

His philosophy had an important impact on the justification of the minimal participation of the state in the economy , which in turn promoted competition among individuals and a gradual improvement of society through the survival of the fittest.

Herbert Spencer died on December 8, 1903 in Brighton, Sussex in England.

Herbert Spencer defended that social evolution occurs through a process of individuation, that is, through the differentiation and development of human beings as individuals . For him, human societies had evolved through a gradual process of division of labour that had converted them from “primitive” groups to complex civilizations.

To argue this, he made important comparisons between animal organisms and human societies. He concluded that in both there was a regulatory system: for animals a nervous system and for human societies governance structures . There was also a support system, which in the first case was food and in the second case was industrial activity.

They also shared a distribution system, which for animal organisms was the circulatory system, and in human societies were the communication systems and means of transport. Thus, what differentiated animal organisms from human societies was that the former exist as a whole, as a unified consciousness; while the latter, consciousness exists only in each member of the group.

From this Spencer develops a theory on individualism and individuation. Within the framework of liberal philosophy, Spencer defends that individualism, as a personal development of the human being as an autonomous member and differentiated from the rest, is closer to civilized societies , unlike other societies such as the military or the industrial ones where despotism is favored and the individual development of each conscience is hindered.

In addition, the development of 19th century English industrial society, according to Spencer, was developing a new Taylorism and preparing society for new forms of slavery in the future. He proposed in this sense to recover the old function of liberalism, which was to limit the power of kings, and at this time could be directed towards limiting parliaments.

Under this idea of individualism, Spencer advocates allowing each member of the society to develop as best as possible as a competent member of it, and thus, those who were more apt or talented would be the ones who would succeed and be better adapted. For this reason, his theory is often placed in the line of social Darwinism, an issue that was gradually criticized by the consequences of generalized poverty of the growing industrial capitalism.

However, his proposals were also later taken up by like-minded philosophers, who found arguments to criticize the welfare state that developed after the war.

Among his most representative works are Social Statics from 1851, and Synthetic Philosophy from 1896. Also his works Principles of Psychology , from 1855, First Principles , from 1862, Principles of Sociology, Descriptive Sociology , and Man Against the State , from 1884.

Between 1841 and 1845 he published The Right Sphere of Government , while collaborating as a journalist specialized in economics and sociology in The nonconformist, where he maintained the responsibility of governments in the defense of natural rights; and also in The zoist and de Pilot, with themes dedicated to the science of the moment and the suffragette movements. Finally, he participated as sub-editor of The Economist, a position he resigned in 1853.