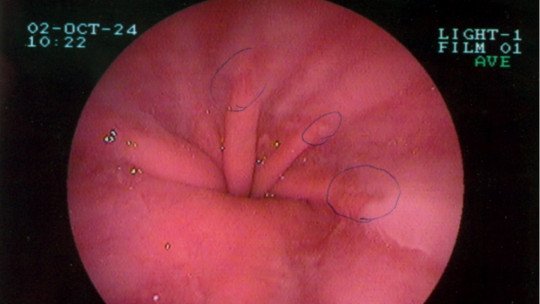 Our digestive system is one of the most important parts of our organism, as it allows us to obtain the necessary nutrients for survival. One of the main organs of this system is the stomach, being the first of the digestive organs located entirely inside the abdomen.

As mentioned above, the oesophageal hiatus is a small hole in the diaphragm that allows the oesophagus to pass through it and into the stomach, located below the diaphragm. Normally, it is the esophagus that passes through it, keeping the diaphragm separate from the thoracic and abdominal organs. However, sometimes a problem arises which is called a hiatus hernia.

Hiatal hernia is a medical condition in which part of the stomach protrudes through the esophageal hiatus , leaving a portion of it in the chest. This is a relatively common problem that can generate different symptoms, although it can also occur asymptomatically. This medical condition tends to be more frequent in people between forty and sixty years of age, although it can also appear at other ages.

In cases where symptoms appear , it is common for discomfort or a burning sensation to appear that can reach the throat known as heartburn, pain, dysphagia or swallowing difficulties, possible regurgitation of food, and gastro-oesophageal reflux. Breathing difficulties and obstructions may appear in the esophagus.

Although in many cases it is mild and may not even cause symptoms, hiatal hernia can be dangerous if left untreated , because certain complications may arise. These complications may include gastric perforation, death of digestive tract tissue from necrosis, respiratory complications, or even the lungs absorbing some of the stomach contents. Sometimes bleeding also occurs, visible in black or red stools or in vomiting blood, it is also a concern.

Finally, the walls of the esophagus and stomach may weaken and culminate in Barrett’s esophagus, a condition that can increase the likelihood of cancer.

Several classifications have been elaborated with respect to different subtypes of hiatal hernia , observing different types.

This is the most common type of hiatus hernia. This subtype is characterised by the fact that the gastro-oesophageal junction (the part where the oesophagus and stomach meet) and a part of the stomach called the cardia (the upper part connected to this junction) protrude through the diaphragm and are located in the chest , because the ligament that should hold the gastro-oesophageal junction in place is not strong enough.

This subtype of hiatal hernia is the union of the characteristics of the two previous ones.

This type of hernia appears when it is another viscus that protrudes through the hiatus, such as the colon or spleen. They may or may not be accompanied by part of the stomach.

This condition is rare and extreme and can lead to serious health problems. In it, the entire stomach is located in the chest.

The reason why a part of the stomach protrudes through the hiatus can vary greatly. In some cases it is possible to find that there are malformations or congenital conditions that cause or facilitate it (for example, some people have a much larger hiatus than usual).

However, this type of problem is mostly considered to have an acquired cause. One possible explanation lies in the loss of flexibility and strength of the ligaments and muscles of the diaphragm with age.

Another possible cause can be found in the excessive strain on the abdominal muscles or the diaphragm itself. For example, people with digestive problems who have to make great efforts to defecate, or people with a persistent, strong and chronic cough, can provoke the movement and protrusion of the stomach.

Also the performance of certain surgeries can cause the hiatus to expand. It can also occur with obesity or pregnancy if the pressure in the abdominal muscles increases.

The treatment to be applied in each case of hiatus hernia will depend largely on the situation of each individual. In case there is gastroesophageal reflux (a disorder with which comorbidity is common) this condition should also be treated.

In some cases, treatment may not be required, although it is advisable to follow a diet with light meals that avoid fried foods, fats, spices, alcohol and products that increase acidity or produce gas, while increasing low-fat meals and products that regulate the pH, such as yogurt and some types of dairy products.

Some individuals require the use of different types of drugs such as antacids to achieve heartburn reduction, histamine-2 inhibitors or proton pump inhibitors.

In the most severe cases it may be necessary to perform surgery to reposition the affected organs while reconstructing the hiatus and creating measures to regulate intra-abdominal pressure.