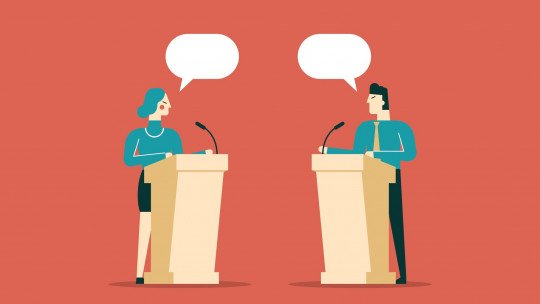 In all kinds of contexts and areas, such as the media, scientific forums, talks with friends or even parliamentary speeches, debates are often generated in which reasons are given and asked for in order to defend a particular action or position.

That is why it is so important to know how to argue correctly because, in addition to being an everyday action , it is necessary to know how to explain one’s point of view in an infinite number of situations , in which, if we manage to convince others, it can bring us benefits.

Let’s take a closer look at the importance of knowing how to argue well, as well as learning how to do it in the most correct way.

The importance of knowing how to argue

Arguing is a very common action in life in society . This type of action takes on a very important role when it comes to relating with other people, since, one could say that every time you talk to someone, at some point or other of the conversation you will say something whose aim is not merely to inform, but also to make the other person agree with what you have said.

For example, when you are on the street with your friends, you may wonder which is the best restaurant to go to for dinner. Although this situation may be considered banal, the member of the group who can best explain why he or she should go to his or her favorite restaurant can not only exercise the capacity to influence the decisions of the rest of the colleagues, but also acquire a role of certain dominance over them.

Knowing how to argue well becomes extremely necessary when talking about the world of work and the academic environment. To say that more and more companies and universities value knowing how to argue as a requirement is to lie, because practically always it has been taken as a necessary competence both in the work and in the academic environment.

For example, a student who conducts research but fails to adequately defend it in his or her end-of-grade work risks getting a bad grade. On the other hand, a car salesman who does not know how to convince a customer to buy the last car on the market risks losing his job.

But knowing how to argue is not limited only to knowing how to say what one thinks about a particular subject or exert some kind of influence on who one addresses . It is not a merely oral or written task. A person who knows how to argue well is not only a good communicator. He or she is also the one who takes into account the context in which the communicative action takes place, thinks about the level and feelings of the audience with whom he or she is speaking, empathizing to a greater or lesser extent with them. He/she also takes into account the behaviour of other people, whether they are adversaries in the debate or not, knowing whether they agree or disagree with what has been said.

Once the importance of knowing how to argue well is understood, let’s look at some guidelines that serve to make argumentative action satisfactory.

The capacity to know how to argue can be improved through practice, but, to do so, it is very necessary to document in depth the topic one wants to talk about .

Whatever one’s opinion on the subject of the debate, there is little point in defending it without first having seen the related facts.

Today many people give their opinions without knowing what they are talking about and, although they are convinced that they are right, when they try to argue their beliefs the only thing they end up doing is making a fool of themselves by demonstrating their complete ignorance on the subject.

Avoiding this error is as simple as turning to reliable sources of information which, through objective data, expert opinion and scientific knowledge of the subject, will enable us to make our position more solid.

Starting with an explanation that presents what is going to be argued is a very good way to start the debate or discourse.

This introduction will include the premise or thesis , allowing the public to get a general idea of what is going to be discussed and the position that will be defended.

In essence, this introduction summarizes what has become known through the research that has been carried out.

3. Present the evidence from highest to lowest strength

A good strategy to defend one’s point of view is to display the data according to its degree of strength , preferring to go from more to less.

First, we start with the most convincing evidence, with the intention of generating support for our position from the public right from the start.

Progressively, the weaker aspects of our point of view are presented, even though this is no longer of great importance to the public, since we have already managed to gain support.

4. Decide on the type of reasoning used

It is very important that, on the way to the final conclusion during the debate, one chooses the way in which one’s point of view will be rationally defended.

You can opt for deductive reasoning , which starts from generalizations to reach a specific conclusion. Using this type of reasoning, if the premises are true, then the conclusion should also be true. For example:

On the other hand, it is also possible to make use of inductive reasoning , with which we start with the more specific aspects, reaching a more general conclusion later on. For example:

In inductive thinking, if the premises are true, the conclusion may or may not be true . This type of reasoning is used in those cases in which it is required to make predictions rather than arguments.

5. Do not repeat more than necessary

It’s not better to argue for repeating the same thing over and over again , nor for spreading it out with a stream of words that only makes the audience dizzy.

If the speech or manifesto is too long, the chances of making mistakes and getting bored increase.

6. Striving to understand the opponent

If you are in an oral debate or any other situation of this kind, you should make an effort to try to understand the rival position.

This does not mean that you should support the other’s position, of course, but you should try to see what points they have explained and from what sources they are supported .

Once the other side’s point of view is understood, it is easier to defend one’s own position more successfully, especially since misunderstandings and arguing about aspects that the other side has not really said are avoided.

It is very frequent in the debates that situations occur in which, while a person makes a criticism about what the adversary has explained, this adversary jumps up saying something like ‘I didn’t say this’ and, finally, it turns out that he had obviously not said such a thing, which implies that all the criticism made falls down like a house of cards.

Especially in oral debates, it is very important to let the other side explain, without interrupting them while they are doing so.

Also, it is very important that, in case another side has told a demonstrable and solid truth, it is accepted.

Denying the facts, in addition to being synonymous with lying, can be perceived as stubbornness and can do more harm than good to one’s position, since it can make the public see that one of the facts we have exposed is false, the rest also run the risk of being false and we could be refusing to do so.

Denying facts when they have been seen for what they are can be perceived as stubbornness and not accepting reality . This hurts our own position, since it may imply that the rest of the data we have obtained may be false or we have not been able to see how they really were.

To make matters worse, the discussion may reach a point where it becomes difficult or impossible to continue, with one side saying a certain fact while the other refuses to believe it.

8. Sense of humor in its right measure

It may seem obvious, but, although humor can be a good argumentative tool, one must know how to use it at the right moment .

To know if it is really appropriate to make a joke about the subject matter being discussed, it is as simple as having a minimum of empathy and putting yourself in the place of the person to whom it is directed or with whom the joke is made.

The ad hominem fallacy, in Latin ‘against man’, is a kind of (bad) argument used very often both in worldly debates and in those that should be at a higher level, such as politics.

It basically consists in criticizing the opponent for his way of being rather than for his arguments or data he has exposed.

Criticizing people on the basis of their sex, race, sexual orientation, appearance, among others, instead of giving strength to one’s own arguments, will help the public see us as bad losers or people who do not know how to keep their composure.

10. Adapting language to the opponent’s level

If you have done a thorough search for information on the topic to be discussed, it is very likely that you know specialized terms, great reference authors, among other very useful data .

However, one should not bombard those to whom one addresses the argument with a bunch of words in order to make known how much one knows about the subject.

This can lead to a number of drawbacks that certainly do not help in convincing others of our position.

It can be perceived that one takes refuge in having memorized a lot of words without knowing how to use them or relate them to the main objective of the intervention, which is to argue one’s position.

There may also be a feeling that he is beating about the bush, moving away from the main point of the debate. You can talk about issues related to the main topic of the discussion, but you should keep in mind what the reference point is.

On the other hand, and to ensure that the opponent clearly understands us, it is appropriate to adapt the language used to his level. Not in a paternalistic act, but rather with the intention that he does not misunderstand what we are saying or that misunderstandings occur.