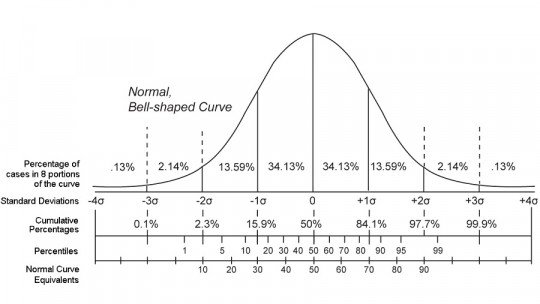 Today it is common for us to have to work with large amounts of data, regardless of whether we are in research or in other sectors.

This requires being able to operate with them, and often comparing and sorting data with each other. And in this sense, it can be useful to use position measurements through which to separate the total values of that measured in various parts to locate in which position one of them is. One of the best known and most useful is the percentile. But… what is a percentile, how to calculate percentiles? Let’s see it throughout this article.

What is a percentile?

One of the most frequent measures of data position is known as the percentile or centile, which implies the division of the total of what is being measured into 99 parts to obtain a total of 100 equal parts . In this way, the total of that which is being measured is represented somewhere in these 99 parts, and the particular data item(s) will occupy a position between these parts. This is a type of quantile or fraction, values that allow data to be separated into groups with the same number of values.

The concept of percentile is intimately linked to that of percentage, but nevertheless they are different concepts : while the percentage is a mathematical calculation that allows us to visualize a determined quantity as a fraction between one hundred equal parts, the percentile indicates the position that a data has to occupy to leave below the corresponding percentage.

What are they for?

Knowing what a percentile is and how to calculate it, even if it doesn’t seem like it, can be very useful in many areas. The percentile is a value that allows us to make comparisons and order between subjects, cases or degree of existence of a factor or variable in a set , something that allows us to work at a very easily understandable level with more or less wide data sets and to establish a position for those we are obtaining.

This, on a practical level, can help us determine for example if an attribute or variable is within normal values or if they are below or above average. Examples of this are found in that they are helpful in determining whether or not a neuropsychological function is altered, whether intelligence levels are within normal if we compare a subject’s results with those of his or her reference population, or whether a child is near or far from the average weight and height for his or her age.

Calculating percentiles: how to do it?

Calculating percentiles is a relatively simple process, it is enough to have all the data represented in the same way and carry out a simple calculation. However, this requires not only having a specific piece of data, but also having a clear idea of what type of score is going to be ordered and with respect to what and who is going to make the comparison.

In fact, if we use different evaluation instruments, we will often see that there are reference tables to evaluate between which values a given percentile oscillates in order to associate the data obtained experimentally with that percentile. These are carried out with exhaustive measurements with a representative sample of the reference population.

When we have to calculate a percentile it is first necessary to take into account whether we are working with ordered or unordered data. When the data are not grouped or ordered, the position in which the percentile is located can be calculated by dividing the product of the percentile by the number of elements in the sample from which we start by one hundred. The formula would be P=(k*n)/100.

When we are dealing with an ordered data set, we can follow the formula Px=Lri+((k n/100 – Fa)/f) (Ac). Thus, it will be enough to add the lower limit of the class where the percentile to product is between the class amplitude and the quotient between the position subtraction minus the previous accumulated frequency and the total frequency.