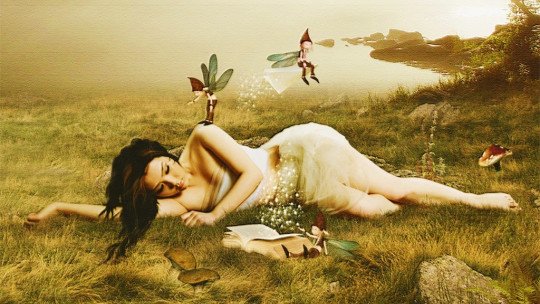 Dreams and everything related to them has long been a world that arouses deep interest both in the scientific community and the general public . The fact that our nervous system is capable of creating invented environments and fictitious narratives with hardly any stimuli from the outside world has made us look for meaning in dreams, try to relate them to our life objectives and even ask ourselves if these hallucinations will have anything to do with alternative realities.

However, there is another factor that makes the potential interest we may have in the study of dreams square. This is the existence of lucid dreams.

What are lucid dreams?

Lucid dreams are those dreams in which we are aware that what we are experiencing is not real . The person who experiences lucid dreams, in short, is immersed in dream-like situations in which hallucinations are intermingled with the consciousness of being dreaming.

Moreover, this fact usually also entails the appearance of the possibility of modifying the very dream that one is living , something that would transform the dream scene into a kind of magical playground in which desires are transformed into reality. This, of course, makes many people want to experience lucid dreams, although achieving this is not easy.

Lucid dreams are statistically rare , and most people do not experience them even on a monthly basis, although there are a few sleepers who experience these episodes relatively frequently, several times a week.

However, there are many people who have become so eager to live lucid dreams on a regular basis that they have formed all kinds of virtual communities, forums and books in which the onironautes , as this is how people capable of experiencing these dreams are called, describe tricks and recommendations for training in certain techniques that theoretically serve to increase the probability of being aware of what is happening in the dream world.

So, in order to have lucid dreams, is it enough to follow these tips? Not so fast. The problem with the recommendations that are usually indicated in books and onironaut forums is that the vast majority of them focus on the management of subjective states of consciousness, something difficult to achieve when one is dreaming or when one is falling into the realm of Morpheus.

Unfortunately, the very gateway to the world of dreams is the place where the techniques learned during the day and the plans to follow during the following hours are left to rest.

Speaking the Language of the Brain

Just because it is difficult to force the appearance of lucid dreams does not mean that it is impossible. Recently, some research in neuroscience has shown that there is an option to generate this type of dreams not through internal dialogue and life philosophy, but by directly altering the way the brain works.

For example, it has been shown that inducing the appearance of gamma-frequency brain waves (specifically between 25 and 40 Hz) in some frontal regions of the brain during the REM phase significantly increases the possibility of having a lucid dream.

Of course, not all of us have the possibility of using laboratory machinery to modify the wave frequencies of our brain while we sleep every day, but this study has served as a precedent to reinforce the hypothesis that the functioning of the nervous system can be materially altered to have this type of dream . From there, we have been investigating what material changes are capable of increasing these probabilities… and today we may have the answer.

Research from last year seems to indicate that a good way to encourage the emergence of lucid dreams might be to briefly interrupt sleep to go back to sleep (or almost sleep ) immediately afterwards . One trick would be to use the option of postponing the alarm clock so that it sounds again a few minutes later.

The research that leads us to this possible solution, however, does not offer us a definitive answer, since it is not an experiment but the crossing of data from surveys administered to several people, some of whom experience lucid dreams regularly. This means that people who are more likely to be aware of what is happening during their dream experiences tend to use the delay button more, but for the moment we do not know if it is this simple trick that makes these dreams appear . As always, correlation does not imply causality.

However, the results are promising and leave the door open for future testing in an experimental laboratory. In a few months we could have the definitive answer that all onironaut are looking for, but, for the moment, the way to test oneself with the alarm clock is open to whoever wants to try it.