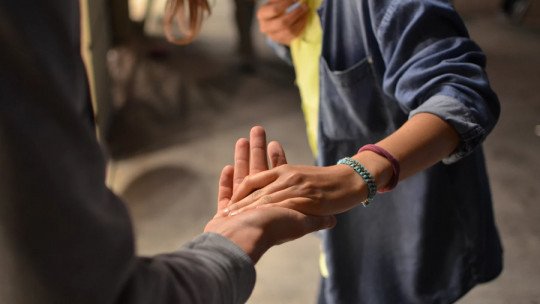 Anorexia is an eating behavior disorder that is difficult to treat . In it, the person sees his or her body perception altered, becoming overweight. This encourages them to carry out unhealthy behaviours in relation to food, with the intention of losing weight to the point where they become malnourished.

Not only does anorexia involve problems at the nutritional level, but it is also accompanied by an inability to cope with anxiety and stress. By exercising control over their food, the person with this disorder can find a brief moment of calm.

Given the complexity of the disorder, it is critical that the family and group of friends of the person with anorexia be by his or her side, convincing him or her that he or she should seek help in addition to this close environment being a key factor in recovery.

Below we’ll look at some tips on how to help a person with anorexia , as well as what not to do at all if you want to speed up the recovery process.

How do you help a person with anorexia? Practical advice

It may be the case that someone close to us suffers from anorexia. In this disorder, because the person has a mistaken perception of his or her own body, seeing himself or herself with a body size larger than the real one, tries to lose weight by going on very strict diets, in addition to exercising in an obsessive way.

By reaching a very low weight and not meeting the body’s demands for calories and nutrients, some of the physical symptoms produced by the disorder are skin discoloration, digestive discomfort, dehydration, malnutrition, dizziness, fainting, fatigue, bone loss, heart problems and electrolyte imbalances. In the long run, this set of physical problems leads to death .

But it is not only the person with anorexia who suffers because of his pathology. Their close environment, both family and friends, suffers as they see a loved one progressively deteriorate.

As it is a mental disorder, the people who are in charge of the diagnosis and treatment of anorexia are psychologists, psychiatrists and doctors , who, working together, favour the recovery of people who suffer from the disorder. It is very important to understand that it is the task of health professionals who are in charge of the recovery of people with these disorders.

However, as friends and family, we can help in recovery by avoiding doing things that may cause the person with anorexia physical and emotional distress as well as providing support and setting an example for healthy habits.

These are the main tips when providing support and assistance to a person with anorexia, although they cannot replace therapy by a professional :

Before talking to someone in our environment who we suspect may be suffering from anorexia, it is best to research this disorder with reliable sources.

Although the fight against beauty canons has succeeded in raising awareness of how eating disorders occur, especially among women, there are many myths about them. We must never forget that is a psychological disorder, and as such must be addressed .

Trying to understand better what might be happening to someone we know is very beneficial for both him and us, since it allows us to understand the suffering he is going through and allows us to see the most appropriate way to deal with it.

A thorough search for information about anorexia will allow you to see that it is not just about wanting to lose weight or look fatter than you really are. There is a lot of psychological discomfort behind it that leads a person to be in this situation.

2. Talk about it at the right time

Once we have documented ourselves, it is time to try to talk to the person we suspect of having this problem.

Given the seriousness of the issue, it is very important to choose the right place and time , to avoid creating a tense situation. The place where you talk to him/her should not have any distracting elements, so you will make him/her pay more attention to you.

Avoid having this conversation after an argument and try to do it in a private place. Express your concern about his health in a calm manner , as doing so in an alarmed manner will increase the tension. While you are talking, describe some behaviours you have seen in him/her that have made you think he/she might be going through some kind of problem. Make it clear that you only care about him/her and that you want to make sure that everything goes well.

3. Talks about anorexia without stigmata

Having documented anorexia prevents us from talking about this disorder based on preconceptions and stigmas. The person with anorexia will no longer be comfortable with suffering from this psychological disorder, so we should no longer make them uncomfortable by using stereotypical ideas about the subject while the conversation is going on.

A good way to start the conversation is to say that many people have this disorder, and that it is not their fault. You can even talk about famous people who have gone through this disorder and managed to overcome it.

4. Make him see the problem

Many people who suffer from a psychological disorder are not aware of it ; however, this does not mean that it does not cause them suffering.

Pictures of people who are suffering from anorexia may appear similar to the person we are concerned about. It is also a good idea to use informational videos from professionals that detail the symptoms of the disorder or feature testimonials from people who have gone through it and who offer their expertise.

Inform her that there are associations, support groups and other resources where she can understand what she is going through. If she is not really suffering from anorexia, it doesn’t hurt to check.

5. Prepare for a negative reaction

The moment the word anorexia appears in the conversation or you express concern about your loved one’s health, he or she is likely to react badly, saying that he or she doesn’t want to talk about it or is less concerned about it.

This type of reaction is normal, which is why you should remain calm, avoid what she might say to you being considered a personal attack and stand firm by saying that you want the best for her. Tell her that you would also be upset if someone told her that you think she might be having a problem, but make her think that it is OK for someone to worry about you.

6. Help him to help himself

Once he is aware of the problem, we must help the person to seek and find an effective treatment for his problem.

Sometimes it is complicated to ask for professional help, and there are many people who need this type of intervention but who keep on procrastinating the appointment and what were going to be a few days turn into years. Although there may not be immediate risk to the person’s life, urgent psychological, psychiatric and medical intervention is necessary. Malnutrition can lead to serious health problems, and the psychological suffering she already suffers may be tearing her apart inside.

To make sure that the person receives the right help we can accompany the person on the first day of their appointment to a health professional . If you cannot afford this, we can offer to find cheaper professional alternatives or even pay for a session. We must understand that money is the bottom line if we want to preserve the life of a loved one.

7. Be an example and stand by them

If you eat together, promote a healthy lifestyle by eating nutritious meals in the right amounts.

Food should not be seen as a source of concern, it should be treated as something that gives pleasure and helps us to maintain our vital functions. Don’t restrict your food, nor say aloud phrases like “I’ve gorged myself today” or “I shouldn’t have eaten that” .

In more advanced stages of recovery, when the person already has fewer concerns about food, if it happens that one day you eat something that was “forbidden” before, such as a piece of pizza or a cake, offer positive reinforcement. Tell him you’re glad he’s eating that food, that he deserves to indulge once in a while.

8. Praise her for being the way she is

The physical is not everything in this world . People have other characteristics that define us and that make up our identity.

Intelligence, kindness, courage and other aspects are characteristics that we can praise of the person we love. This way we will make them feel loved, that we care, and that their body does not completely define them.

What not to do?

Let’s look at several behaviors and strategies to avoid:

The road to recovery is long and involves a deep reflection and self-knowledge phase.

Although with the best of intentions, one should not control all the time what the person does, since it will make him feel that he is being taken away from his autonomy and freedom .

In the case of a teenager, the family should not prohibit her from doing such simple things as going to the bathroom alone or going outside, especially if she has not eaten all the food on her plate. The guidelines given by the professional who is treating her should be followed.

Don’t make negative comments about her body or other people’s bodies , as this will reinforce the idea that people should only be valued on the basis of their appearance.

There are many ways in which society bombards people, especially women, with beauty canons that come to belittle overweight people. Don’t be a part of this. Nor should you make comments like “I’m so fat…” or “I’ve turned into a cow.” They just don’t help.

The person affected by anorexia may have told you about his or her problem because he or she has a lot of trust in you. Also, he or she may have asked you not to tell anyone else, and will be disappointed if you tell his or her family.

Since we are dealing with a health problem in which, in the most serious cases, the person may die, concealing this means making the situation passively worse.

We should tell people around him and, if necessary, tell the authorities in case we see that a death may occur soon.

Given the complexity of anorexia, this will not be solved in a couple of days . We must be confident that the treatment will favour the person’s recovery, but we must also maintain a position of understanding towards the person and be patient in the process.