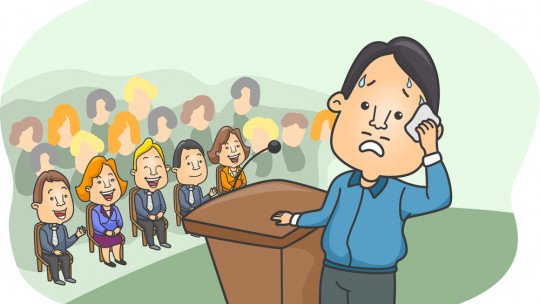 Public speaking is a widespread concern for almost everyone, even those who are used to it for work or academic reasons.

We know that repeated exposure to those stimuli that generate anxiety is one of the most effective psychological techniques to combat fears because of the effect that continuous practice has on our competence and sense of self-efficacy, but… what can we do when we do not have this possibility and yet we need to make a successful presentation?

Before starting, it is important to know what is happening to us at that moment . As in any situation of daily life, when speaking to many people there are three registers that come into play: the physical part (in this case the nerves that can manifest themselves through various symptoms: sweating, facial flushing, increased heart rate), the cognitive part (made up of what we think, which can be led by an anticipation of failure such as: “I’m going to get confused, they’re going to laugh at me, I’m going to do it wrong”) and the behavioural part: what we do (how the presentation is made).

However, what interests us here is to distinguish the line between the objective and the subjective part, which often tends to get mixed up. Let me explain. The only thing we can manipulate as we prepare to speak in public are the objective questions.

For example, we must ensure that the concepts are clear, that the expression is appropriate or that the graphic support is relevant . Therefore, the result is related to the amount of time invested in preparing the material, our knowledge about the topic or the consideration of the audience we are addressing. The rest, the subjective part, such as the opinion that others may have of my competence, if they get bored with what I say or if they notice our nerves, is the one that we must renounce from the first moment we stand in front of an audience. The trap is set as long as we try to manipulate that part of the equation, which is not up to us.

The cognitive side of fear

We said earlier that there are three registers to consider: the physical, the behavioural and the cognitive.

Well , even though they are all interrelated, the greatest influence is orchestrated in the last one , so that is where we will focus, demystifying some erroneous beliefs that can be useful for our purpose.

The two fallacies of nervousness

First fallacy: one of the most widespread fears is that the attendees easily perceive the nervousness of the speaker . However, these signals are not interpreted by others as we think, and most likely they do not become aware of them. Hand sweat, heart rate, or fear of not doing well are imperceptible.

The only “detectable” signals are tremor (of the hands or voice) and facial blushing, and even these factors are often partially masked by the distance between us. In general, the interpersonal distance from the audience is at least 5 meters in presentations. If it is already difficult to detect it in the vicinity, several meters away it is almost impossible.

We perceive all the details of what we do, but the others stay with the general picture . The external correlate they have is less than half of what we perceive. In fact, the most useful thing we can do with our nerves is to “encapsulate” them, that is, let them be, given that we have the capacity to think and speak even in their presence, which leads us to the second fallacy.

The most common mistake we make when we perceive that we are nervous is to try to reduce our tension by telling ourselves, “Don’t be nervous. But our mind works under the mandate of paradoxical intention. That is to say, it is enough for us to say “try not to think about the nerves”, “try to calm down” for the opposite to happen .

Therefore, the most effective strategy for not getting nervous or increasing our nerves is not to try to convince ourselves that we don’t have to get nervous, but rather to accept and tolerate the symptoms of our restlessness by letting them be so that they go away sooner.

We tend to perceive the elements that surround us from their globality, instead of interpreting the details separately.

Therefore, the errors made during the exhibition (which represent the details within a whole) and the words not found at a given moment, go unnoticed by the audience , as do the number of stairs to be climbed to reach the room or the plates contained in the paintings that adorn the auditorium. Which brings us to the next point.

As if it were a salad of letters, our exhibition works like the reading of a text: what appears underlined or in bold will attract more attention than words in simple format.

Therefore, if we do not emphasize our misunderstandings (following the analogy: if we do not “underline” them) neither will others in their “reading of the exposition”. Just as with nerves, accepting and tolerating mistakes reduces the likelihood of repetition, promotes our safety and redirects the public’s attention to other aspects.

A final trick to get rid of the nerves

If you want to feel safer or more secure and avoid the fear of public speaking, one last proposal.

Look between the eyes: eye contact is essential to generate a feeling of security and confidence in our interlocutors. However, in evaluation situations it can be a distracting or intimidating element that takes away from concentration and increases nervousness. Therefore, if we look at our examiner’s eyebrows, they will believe that we are looking into their eyes and we maintain a neutral fixation point devoid of undesirable emotional reactions.