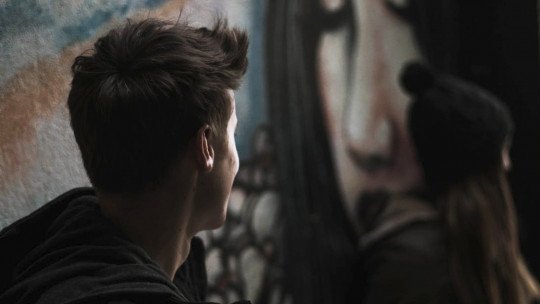 People often have a restlessness to understand the behavior of others. This often leads us to ask ourselves not about their observable actions, but about what they think and feel .

But even though some signs are evident, we do not always manage to understand the behaviors of other individuals unless they verbalize their intentions, emotions and feelings to us.

How to tell if a boy likes you

In this article you can find a number of signs that indicate that a man has special feelings for you. Now, although many times these signs are very obvious, we humans are very complex. Before you evaluate this list you must take into account that sometimes you can interpret these keys incorrectly. However, if a boy shows many of these signs the probability that he likes you is high .

1. looks at you differently

If a man is interested in you he will look at you differently than he does a friend. According to a study conducted by the University of Chicago that was directed by Dr. Eckhard Hess, when we are attracted to someone, our pupils dilate , that is, they get bigger.

This reaction has nothing to do with the amount of light where the two people are. It’s certainly a very subtle sign, but it’s a good indicator of whether he likes you. Also, other studies show that the gaze of the person who is attracted to you is often directed towards the mouth and lips and maintains eye contact during most of the conversation .

When we are with the person who drives us crazy, we feel good and unconsciously reflect that happiness. The continuous smile is an unmistakable sign that this man is thinking of you, because this act expresses that the person in front of him is causing him good feelings.

If he likes you very much, he may even smile for no apparent reason. It should not be forgotten that falling in love and attraction cause the brain to secrete a series of neurochemicals related to positive and energetic mood : serotonin, endorphins, adrenaline… You can learn more about neurotransmitters and their influence on love in this article: “The chemistry of love: a very powerful drug”.

3. Wants to spend time with you

Logically, if a boy is very attracted to you he will try to get you to meet him outside of work or school or college, or he will probably invite you for a drink. But even if he doesn’t explicitly ask you, there are other ways to tell that he likes you.

For example, if you work in a coffee shop and he shows up every few days just to chat with you, it may be a sign that he’s looking forward to meeting you. When someone likes you a lot, you become their priority and their mind thinks of you constantly.

4. He pays attention to you

When someone is attracted to another person their attitude changes and they pay special attention to them. Thus, he may mime you, listen to you carefully while you talk, be gentle… Don’t be surprised if the day of your birthday is the first one that congratulates you. Actually, although it may seem that his attitude is selfless, when we like someone our interest is to be with that person. There is always something selfish in romantic love .

I may be very attentive to you, but it seems like normal behavior to you. Then think about the way he treats others. Is it really the same with them as with you?

Of course, if she likes you, she’ll usually wish you felt the same way. People are able to move heaven and earth for that someone who makes them feel special. He may not be in love yet, but if he likes you very much, he would probably rather have dinner with you than go out with friends.

6. Always active for you on social networks

There’s nothing more annoying than talking to someone on WhatsApp and having them respond for hours. Worst of all, when he finally answers you, he doesn’t seem very interested either, which may indicate disinterest.

When a guy is looking to say hello to you on Facebook, talks to you frequently on WhatsApp (except when he’s very busy or working) and even talks to you at night from his bed, these actions may reflect his attraction.

7. The bodies line up

It seems that when two people like each other, body language speaks for itself. Specifically, the bodies of the people who are attracted to each other line up in front of each other . This is closely related to our tendency to unconsciously imitate the people we interact with; when attraction is involved, this chameleon effect is even more intense. At least that’s what Lisa Daily, author of the book Stop Getting Dumped!

8. Bends over when you are speaking

A man who is interested in you will not only stare at you and align his body with yours, but, when talking to you, he will lean towards you and not cross his arms and legs on the defensive, something that is usually more typical of the male sex than of the female sex. This is a way of showing affective availability and, therefore, interest in maintaining intimate contact.

It is possible, though not certain, that your friends know something of what you think. So you can pay attention to different signs if you ever spend time with them, too. For example, if they make a joke about you two, if he smiles when they see you coming and he is there, or if they give each other a look of complicity.

10. He gives you compliments

When a boy is interested in you, he may well listen to you and pay special attention to what you say. But it’s also common for him to leave you some clear messages that he finds you interesting . This is no secret, as most men do this out of cultural inertia. A “you look very pretty today”, “this dress suits you” or “you smell good” is not something you usually say to someone you are not interested in more than once in many days.

According to David Givens, an anthropologist specializing in non-verbal communication and author of the book Love Signals: A Practical Field Guide to the Body Language of Courtship, there are 4 obvious signs when there is attraction between a man and a woman . They are the following: