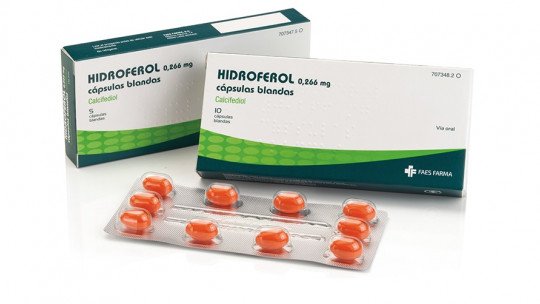 Vitamin D is very important for the human being, being fundamental for the absorption of calcium and having a great participation in systems like the nervous, muscular-skeletal or the immune system.

It also influences our energy levels, mood and even mental health. And although it can be absorbed by various means such as diet or through sunlight, sometimes it will be necessary or useful to supplement these means **with a drug such as hydroferol

Hydroferol is a vitamin D analogous medication , containing in fact the product of its hepatic metabolization, calcifediol. It is an active drug that has great effect on multiple systems, and is usually given to those who cannot synthesize calcifediol or who are deficient in vitamin D.

The effects of this drug are extensive. Specifically, at a gastrointestinal level facilitates the absorption of essential components such as calcium and phosphorus, in addition to regulating how these components are filtered and excreted at a renal level. In the bones it generates an increase in the capacity of collagen production and the creation of receptors for different growth hormones.

What is hydroferol used for?

Considering that hydroferol is a medication that aims to introduce a certain type of vitamin into the body, one of the main uses of this drug is to fight against vitamin D deficiency.

In addition, another of the best known is the prevention or treatment of osteoporosis (although other medications containing the precursor to calcifediol are often used), since it causes an increase in calcium in the body that can help keep bones strong and slow or stop their deterioration. It is also used in some other osteodystrophies or bone problems.

On the other hand, hydroferol is used in some cases of kidney failure linked to vitamin D and calcium deficiency . Likewise, it contributes to the treatment of rickets, and may prevent the appearance of malformations in minors who are still in the developmental period. It may help to treat problems derived from the consumption of anticonvulsants or anti-inflammatory drugs.

In addition to these aspects it is very useful for the prevention of diabetes mellitus by keeping blood glucose under control and regulating the level of insulin emitted by the pancreas. It does this by preventing fats and carbohydrates from being transformed into glucose.

It is also considered that it may be beneficial at normal doses for brain function by increasing vitamin D levels and thus energy. From this we can deduce that it can also be positive for subjects with fatigue, insomnia problems or anxiety. On a cardiovascular level it also appears to produce benefits by contributing to blood pressure control.

Side effects and risks

Hydroferol is a very popular and consumed substance, but like other medications it can cause side effects. These are rare adverse effects but can occur with excessive doses or for longer than recommended, as the vitamin D from which hydroferol is analogous can build up in the body and become harmful.

Thus, the adverse effects are related to excess vitamin D and/or calcium, one of the most important being hypercalcemia or excess calcium in the blood. In this sense we find that some of the effects are the presence of nausea, loss of appetite and metallic taste in the mouth , constipation, cardiac arrhythmias, tiredness and fatigue, headache, bone or muscle pain or irritability.

In addition, photophobia, conjunctivitis, calcifications in soft tissues such as the eyes, polyuria (excessive need to urinate), runny nose, fever and sexual inappetence can occur. Cholesterol and heart rate can skyrocket and organs such as the pancreas can become inflamed. In some cases it is possible that psychic alterations may occur. In very serious cases , kidney failure or even cardiac arrest may occur .

Therefore it is very necessary to take into account that although in a controlled way this medicine has a great amount of benefits and can be used for multiple problems it cannot be consumed without any type of control, and it can have serious harmful effects.

Although it does not usually cause side effects, hydroferol consumption is not indicated for all types of people. It is important not to exceed the recommended daily amounts. Pregnant or lactating women should be especially careful and should consult their doctor before deciding whether or not to take this drug. It is possible to give it to minors, but the doses should also be smaller.

It is necessary to monitor possible interactions with medications that also produce an increase in vitamin D or calcium, as well as to control the diet so that excessive increases in these components do not occur.

Finally, hydroferol is contraindicated in patients with hypervitaminosis or hypercalcemia, patients with kidney stones and subjects allergic to calcifediol.