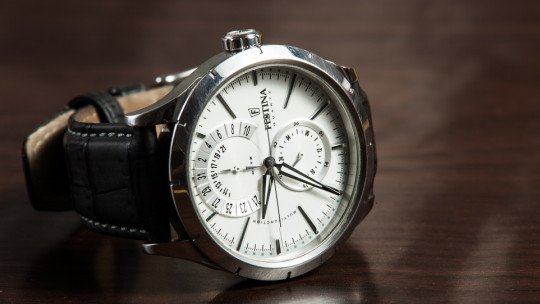 The history of the wristwatch dates back to its invention in 1812, when Abraham Louis Breguet created the first one on behalf of the Queen of Naples and Napoleon Bonaparte’s sister, Caroline. However, it was not until the beginning of the 20th century that it began to become popular among women. Men’s wristwatches appeared in the world of aviation at the hands of Louis Cartier, who made the first one for the pilot Alberto Santos-Dumont.

Since this time, great progress has been made in its development and operation, but from the very beginning there has been doubt as to which hand the clock is placed in . It is about this aspect that we will talk throughout this article.

Which hand do you put the watch in?

While this is something most of us do automatically, we may sometimes wonder if there is a social norm regarding where the watch should be taken .

The reasons for putting the watch in the opposite hand are eminently practical. First of all, we must take into account that this allows that at a functional level what we do with the dominant hand is not affected if we want to look at the time .

For example, when writing the watch and its strap, it could bother the wearer, which is not the case with the non-dominant hand. Another aspect to take into account is the fact that having to stop performing actions with the dominant hand to look at the time could have fatal consequences in certain contexts , as it happens in the field where the first male watches originated: aviation.

In addition, we constantly use the dominant hand in most actions that require the use of the hands, something that if the watch were in that hand would expose the watch to blows, frictions, scratches and various fractures as the dominant hand is more often sliding on different types of surfaces.

It should also be noted that the first wristwatches needed to be wound several times a day , which would require the use of the dominant hand to be done easily.

An explanation with more of an urban legend

Although it may seem a minor issue, the truth is that even in the 20th century there are records of reflection on this subject. In addition to the above-mentioned explanations, some false explanations have also emerged as a result of ignorance that we could even consider urban legends.

One of the best known in this regard refers to the fact that the reason was that the watches were placed in the left hand (in the case of right-handed people) because is the wrist on which the pulse is usually measured .

The popular belief when automatic watches began to exist (i.e., those that left the need to be wound) was that the watches were powered to function by the movements or energy transmitted by the heartbeat that manifests itself on that wrist (despite the fact that the pulse actually exists on both wrists and that the functioning of the watches has nothing to do with the pulse).

Why do you sometimes put it on the other wrist?

While putting the watch in the non-dominant hand is traditional and has a practical sense it does not imply that you cannot or do not want to wear it in the dominant hand. In the end, each of us will place it where we please and it will continue to fulfill its function in the same way.

In fact sometimes because they are an eye-catching complement and symbol of power and wealth (if they are branded) sometimes they are deliberately placed on the dominant wrist. It can be a way of distinguishing oneself or trying to differentiate oneself from the traditional in a symbolic way .

Another reason why it is usually worn on the dominant one is because of aesthetics or design. There are some watches designed to be worn on a specific wrist (something visible because of the orientation of the crown). In principle, the crown should be on the outside of the sleeve, being visible.

However, we can see that, for example, although today left-handed people have watches made taking into account their manual dominance, at first being left-handed was frowned upon and even tried to “correct” itself, or it was not usually taken into account because it was not the majority manual dominance. In this sense many people can carry the watch in the dominant hand as an inheritance or custom of those times , not as far away as it seems.