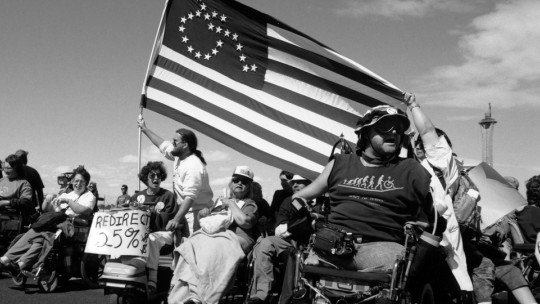 The Independent Living Movement groups different struggles for the recognition of functional diversity and for the guarantee of their civil rights… Broadly speaking, the Independent Living Movement subscribes to a social model of disability, where the latter is understood as a situation (not an individual medical condition), where a person interacts with a series of social barriers.

The latter was later articulated with the concept of “functional diversity” which aims to move away from the traditional association between “diversity” and “lack of capacity”. In this article we will briefly review the history of the Independent Living Movement , paying attention to the repercussions it has had in promoting the quality of life of people with disabilities.

Independent Living Movement: what it is, beginnings and repercussions

In 1962, the prestigious University of Berkeley in the United States accepted for the first time a student with a disability, specifically in management and law courses. His name was Ed Roberts, he had had polio at the age of fourteen and as a consequence a neuromuscular paralysis, an issue that led him to require significant support. Because he was able to meet that need, in large part because of his mother’s accompaniment, Ed Roberts soon became a leading activist and civil rights activist for people with disabilities.

When he began his studies, Ed Roberts had to find a residence that was suitable for his medical conditions, but he did not see the need for his room to become a hospital ward. In response to an offer from the director of the university health service to allocate a special room at Cowell hospital ; Ed Roberts accepted, provided that this space was treated as a dormitory and not as a medical centre.

The authorities accepted and this set an important precedent for other people who also had some medical condition that they wanted to be treated not only by medicine. Likewise, Ed was gaining participation in other environments, and even helped reform many of the physical spaces, inside and outside the university, to make them more accessible .

A large community of independent living activists was then created, who opened, among other things, the first Center for Independent Living (CIL) at the University of Berkeley. It was a pioneer in generating more community-based models to address the diverse needs of human diversity.

Nothing about us, without us

The Independent Living Movement made it visible that understanding disability from the most traditional biomedical model had the consequence that the interaction with diversity and the provision of social services would be carried out under the same logic. That is, under the idea that there is a person who is “sick”, who has little autonomy , as well as limited capacities to participate in society. And this last one, society, was left as an external entity and alien to these limitations.

In other words, the stigmatization of diversity was being promoted , through stereotypes such as the fact that the person in a situation of disability cannot study, cannot work or cannot take care of him/herself; which finally had repercussions on serious limits to access different spheres of social life.

Not only that, but very important research was not being generated to intervene on different life conditions. But, such research and interventions were leaving aside people with disabilities themselves, that is, their needs, interests, abilities; and everything that defines them beyond a condition that can be explained by medicine.

A motto then arises that has accompanied the movement, and has even been transferred to other movements, which is “Nothing about us without us”. At the same time, it was made explicit that an independent life is not a solitary life, that is to say, that there is a need for interdependence and in many cases there is an important need for support, but that has to be satisfied without sacrificing the autonomy of the person with a disability .

Background and other social movements

As we have seen, the Independent Living Movement arises as a reaction to the dehumanization of the process that has historically characterized the traditional medical model . And it also emerges as a struggle for the need of civil rights and for equal opportunities for social participation.

One of the most immediate antecedents to the Independent Living Movement is that Ed Roberts was admitted to the University of Berkeley two years before the latter became the cradle of the free speech movement, which among other things helped to empower various causes.

In the same context, there were other struggles for equal opportunities in the United States. The African-American rights movement was gaining strength, on a par with the feminist movement. For their part, people with disabilities noted that, as with other minorities, they were denied access to the most basic services and social benefits, e.g., education, employment, transportation, housing, etc.

Different principles were generated from the struggles of the Independent Living Movement. For example, the promotion of human and civil rights, mutual aid, empowerment , responsibility for one’s own life, the right to take risks and life in community (Lobato, 2018).

We summarize the above below, taking as a reference the document of Shreve, M. (2011).

From patients to users

Persons in a situation of disability were for the first time considered as users of the services, rather than as patients, and subsequently as clients, all in line with the transformation in the provision of social services that took place in that context.

The latter gradually helped to convey the idea that such people can be active agents in their own situation, as well as in making decisions about the services and products that best suit their support needs.

This resulted in people in a situation of disability beginning to group together and abandon the role of the sick. Mutual aid groups were then created, where the protagonists were people with disabilities, and no longer expert medicine.

The latter is still considered as one of the necessary supports). The latter favoured the fact that both persons with disabilities and professionals took other positions and new specialities were created that were more focused on accessibility than on rehabilitation .

People with disabilities made it known that medical and pharmacological intervention is very important, however, it is not sufficient or necessary in all cases. From here, the care paradigm moved from medicalization to personal assistance, where the person with disability takes a more active role .

In the same way, especially in the case of people diagnosed with mental disorder, it became possible to begin a process of de-medicalization and de-institutionalization of psychiatry, where different violations of human rights that took place in these spaces gradually became visible. From here, the foundations have been laid to generate and promote more community-based and less segregationist models .

Beyond the United States

The Independent Living Movement soon moved to different contexts. In Europe, for example, it was started in the 1980s by British activists who had been in the United States during the development of the movement. Since then, different forums have been created in many countries, which have significantly impacted the policy and rights paradigm in relation to functional diversity.

However, since resources and needs are not the same everywhere, the above has not been applied to all contexts. The community model and the rights paradigm coexist with strong processes of stigmatization and segregation of disability. Fortunately is a movement that continues to be active and there are many people who have continued to work to change this.