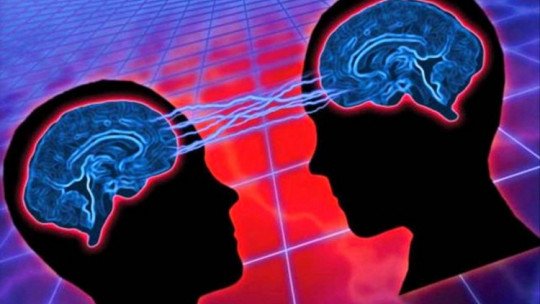 Is it possible for two individuals to communicate at a distance? This is a question that seems to have only an affirmative answer in science fiction movies. But neuroscience is studying this possibility, which has more and more scientific support.

The brain as a generator of energy

The brain generates electrical energy as a result of millions of operations and functions carried out by a system of electro-chemical circuits through which information is transmitted. Therefore, it is easy to think about the possibility of analyzing it or influencing it through electronic devices. Today, thanks to research and advances in new technologies, we know more about our brain, how it works and how to influence it.

Some of the various non-invasive or low-invasive methods that allow us to record or influence brain activity are electroencephalography (EEG) and transcranial magnetic stimulation (TMS). Broadly speaking, EEG allows us to record and measure electrical activity in the brain, while through TMS we can affect and temporarily modify certain neuronal activity by stimulating or inhibiting certain brain regions .

The manipulation of brain activity

What does recent research show about advances in the interpretation and manipulation of brain activity?

Today, it has been shown that through an EEG it is possible to decipher simple thoughts , such as whether the person is imagining that he or she is moving some part of his or her body. This is because, when we imagine a voluntary movement (without carrying it out) certain neuronal circuits are activated in our motor cortex, responsible for controlling, planning and executing our movements. Thus, through EEG we can receive certain information about what the person is imagining or thinking and, somehow, as Alejandro Riera (Physicist, PhD in neuroscience and researcher at Starlab ) mentioned at the last spring meeting of the SCNP, “we are starting to crack the neural code”.

With this concept in mind, what would happen if we could send or “inject” this information into another brain? Could we achieve intercerebral communication at a distance?

Communicating two brains with each other

Although all this may sound more like a science fiction movie, on March 28, 2014 the first experiment in history was carried out in which two people shared a conscious thought in a direct brain-brain way. Neuroscientist Carles Grau, professor emeritus at the UB and scientific advisor to the company Starlab , and physicist and mathematician Giulio Ruffini , from the company Starlab and Neuroelectrics in Barcelona, communicated at a great distance with their brains. This communication was carried out at a distance of 7,800km since the transmitter was in India and the receiver in France. In this case, the word transmitted was “hello”.

Through the electrode hull of the emitter and its recording in EEG it was possible to encode this thought of the word “hello” and transform it into binary code (formed by ones and zeros) through a Brain Computer Interface (BCI). This transformation to computer alphabet was achieved by establishing a system by which, when the emitter thought of moving the hand, the interface registered a “1”, and when it thought of moving the foot, it registered a “0”, until the whole word was coded. In total 140 bits were transmitted with an error range of only 1-4%. Through the Computer Brain Interface (CBI) and through the EMT, the receiver, who was blindfolded, received a list of bits interpreting a “1” when it saw phosphenes (sensation of seeing lights) and a “0” when it did not receive phosphenes, and so on until it decoded the whole message. To achieve this communication they had to perform a training and knowledge of the binary code previously and for months (Grau et al., 2014).

The present study affirms that it is possible to unite two human minds through the integration of these two neurotechnologies (BCI and IWC) in a non-invasive way , consciously and cortically based (Grau et al., 2014). Likewise, this research has demonstrated an inter-subject communication through the use of the computational alphabet, which brings us closer to a vision of the human being as a cybernetic organism, or cyborg in a technological society.

For now, we may be able to convey certain thoughts, but what do we intend to achieve in the future?

After this pioneering research, like that of Grau and Ruffini (2014), future lines of research have been opened, such as those that aim at the direct and non-invasive communication of emotions and feelings .It is even expected that computers will be able to interact directly with the human brain.

An improvement in the clinical setting is also intended, treating illnesses in which the subject is unable to modulate his thoughts, as can occur in depression, pain, psychotic or obsessive-compulsive thoughts. Finally, research is also being conducted to achieve two-way communication in which the same subject can send and receive the message, that is, integrate the EEG and MST in each subject.

Doubts and possibilities of intercerebral communication

What would be the technological impact on society? There are several ethical considerations to be made about the possibility of inter-cerebral communication.

Some of the ethical and moral questions that may arise when thinking about the future development of innovative techniques that allow a more thorough manipulation of brain activity are already being discussed and studied.

What would be the positive and negative consequences if it were possible to decode the neuronal code, would it be a benefit or rather would it harm us, who would really benefit and who would be harmed, what would become of “freedom of thought”, to what extent would our personality continue to be “ours”, where should the limits of transhumanism be established, would it be within the reach of everyone?

It is clear that the world is advancing by leaps and bounds, we are evolving and entering a field full of possibilities that can benefit our species and improve the quality of life, however we must not forget the importance and need to act with humility, equality, justice and responsibility so that transhumanism, as Francis Fukuyama would say, does not end up being “the most dangerous idea in the world”.