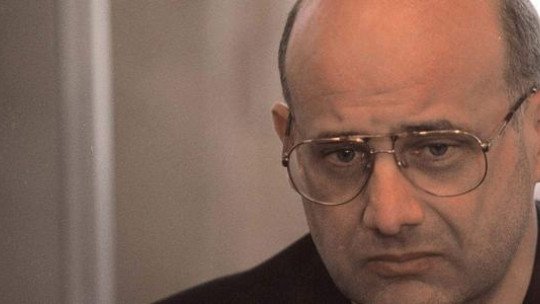 Nineties. A quiet village in the south of France, Prèvessin-Moëns, and a case so shocking and chilling that not even the specialists in charge of conducting the psychological evaluations could give an explanation . We are talking about Jean-Claude Romand , better known as “the adversary”, the name with which the book inspired by his case was published.

Jean-Claude’s life revolved around an intricate and complex system of lies . Nobody, not even his own family, knew who he really was, what he did or how he spent his day-to-day life… and, his family would never get to know it, since in order to spare them the suffering of knowing that he had lied to them he ended up killing them all.

Jean-Claude was born on 11 February 1954 in Lons-Le-Saunier, a small town near the Swiss border. In his childhood he was a lonely boy, with few friends and a withdrawn attitude .

An only child, from a very young age he lived with concern for the health of his mother, a sickly woman, of whom he was unaware of the illness he was suffering, but who showed herself to be excessively worried about any unforeseen event, a fact that motivated him to hide his emotional states from her and to consider whether it was appropriate to tell the truth if doing so caused him distress.

Youth and entry into medical school

In the academic field, he stood out for being a dedicated student, a boy who could be considered very formal and introverted, who was not fond of sports and who went through school without major inconveniences. Once he had finished his elementary and high school education, he decided to enroll in the University of Medicine , a career that he studied without any problems until the second year, when he stated that on the day of the final exam in Physiology, he did not hear the alarm clock and, for that reason, he did not go to take the exam, which was eliminatory. This fact marked a turning point in his life and was the first of his big lies.

After this episode, which also coincided with the refusal of his then partner, Florence, to continue their relationship, Jean-Claude locked himself in his room on campus , stopped attending classes and devoted himself to reading newspapers and watching television, and even gained 20 kilos due to the lack of activity and the junk food.

Last years of career, a stage full of lies

The following years, between 1975 and 1986, he continued to enroll in the second year of medical school, presenting false medical certificates to justify his lack of attendance at classes and exams. He managed to get Florence to resume her relationship with him and established a daily routine of going to college every day without ever going to class.

He changed his schedule to avoid coinciding with acquaintances who might discover him and he studied the subjects of the degree course so that he could talk to his classmates without raising suspicions , even, at times, helping Florence to study the subjects that she, a pharmacy student, found difficult.

After this period he informed his family and friends that he had finished his medical studies and had received a scholarship to work at the WHO headquarters in Geneva, a few kilometres away from the city where he lived. At that time, he was already married to Florence, they had been married in 1984, and they had a daughter, Caroline, who had been born a year earlier in 1985. In 1987, the couple’s second child, Antoine, was born.

Working and sentimental life, a real scaffolding of falsehoods

The years after his supposed incorporation to the WHO passed within an apparent calm and normality, Jean-Claude went to work every day, assured constant travel around the world for work purposes and when he returned home he made ostentatious displays of his research and conferences, although he always took care to give few details, alleging that the information was secret.

But what did he really do during the time he claimed to be working, the answer is that he dedicated himself to wandering around roads and bars, to walking in the woods , to sleeping in the car or reading WHO pamphlets or books that he collected at a scientific conference and, above all, he studied the maps of the cities he supposedly travelled to, in order to maintain his lie.

How did he earn money to support the family?

Another big question that arose after all his lies came to light was how he managed to support his family financially, as they maintained a bourgeois lifestyle that was financed by scamming family and friends. Mainly he developed two types of fraud , one consisted of offering his acquaintances an investment plan with a high return on investment, taking advantage of his work at the WHO, and in this way he managed to swindle his friends of up to two and a half million francs and the other was the sale of oncological medicines in a supposed experimental phase, for a value of 15,000 francs each pill.

But no one doubted the good Jean-Claude, who had invested himself with a social image of success and prestige and lived devoted to his work and his family.

The beginning of the end

Florence’s father died in strange circumstances, falling down the stairs of the family barn, while he was having a conversation with Jean-Claude in which he asked him for part of the money he had given to his son-in-law to invest, but no one doubts the honesty of the supposed doctor who becomes the head of the family and in charge of looking after everyone’s well-being. At this time, Jean-Claude meets Corinne, the wife of an acquaintance , for whom he begins to feel a great attraction and whom he intends to conquer. At first she rejects him, to which Jean-Claude responds with a suicide attempt followed by another big lie to hide it and a period of isolation at home, in which he manifests as in the university depressive behaviors. Finally, Corinne agrees to maintain a relationship with him. But having this new relationship and adding one more lie, it becomes more and more difficult… Corinne, who has also been a victim of the investment fund scam, demands benefits from him, his wife, Florence, begins to suspect that something strange is going on… and, for this reason, cornered, on January 9, 1993, Jean Claude Romand decides to put an end to his double life.

That day, he met Corinne, making her believe that they were going to have dinner at the house of an important WHO collaborator, and halfway through he tried to kill her, without success, as she managed to convince him not to do so. After leaving her back at home, Jean Claude went to his own house and once there, first killed Florence , hitting her on the head with a rolling pin. The next morning, while his children were watching TV, he called them to his room and there he shot them both, who died on the spot.

After having killed his wife and children, Jean-Claude went to eat, as he did every week at his parents’ house, and once there he also killed his father, who was shot twice in the back, and his mother, with one in the chest. After these new deaths, he returned home, ingested a large quantity of expired barbiturates, and set fire to the house, with the idea of dying together with his loved ones . This did not happen.

Upon seeing the fire, neighbors and family friends called the fire department, which managed to extinguish the fire and get all the family members out of the house, but unfortunately, they only found a dying Jean-Claude Romand alive, who was transferred to a hospital in a state of coma.

The first investigations soon began and the bullets in the bodies of the minors and the blows to Florence’s head were discovered. They also found the bodies of Jean-Claude’s parents, at which point everyone began to suspect possible revenge against the Romand family… but the truth soon came out .

Investigations confirmed that Jean-Claude Romand did not work for the WHO and a note in his handwriting was found in his car confessing to the crimes. In the end all his lies were discovered, no one in his circle of acquaintances could believe that the attentive and familiar Jean-Claude had been capable of committing such acts and lying about all aspects of his life. But the evidence left no room for doubt. When the fake doctor woke up from his coma, he confirmed the facts and claimed to have done so so that his relatives would not suffer from knowing his lies.

Psychological profile of the pathological liar

What goes through someone’s mind to commit such an act? The four specialist psychologists who evaluated Jean-Claude Romand had serious difficulties in diagnosing him and the result was a Narcissistic Personality Disorder, based, above all, on the motives given by him for committing such crimes, but evaluating in depth the facts and the pattern of behavior exposed by Jean-Claude, this disorder is easily dismissed.

What is most striking about Jean-Claude Romand’s pattern of behaviour is the fact that his life revolved around a big lie, which only he knew, making him a lonely, withdrawn person who was not comfortable in social situations or being the centre of attention.

It is also true that in his mythomania (pathological lie) Jean Claude had invested himself with a certain prestige and authority, but it was not with the purpose of exalting his person, rather he used this character as an instrumental means to avoid giving information to his relatives and friends about his work and his way of life.

After discarding the diagnosis made at that time by the professionals in charge of the case, it is up to the curiosity of each one to try to give an answer to this curious case. I personally, after an exciting in-depth study of the facts and the behavioural pattern of Jean-Claude Romand, am inclined to think that his profile could very well fit a Schizoid Personality Disorder concomitant with a persistent depressive disorder.