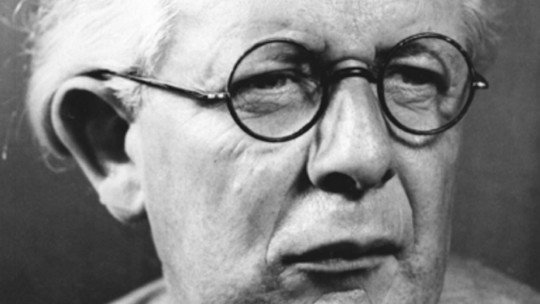 It probably won’t surprise anyone that we are not born with the same mental capacities that we have in adulthood. The ability to understand the world, to take into account that objects and people continue to exist even though we cannot see them, to attribute intention and a mind of our own to others, to capture and interpret information from the environment, to make plans to solve or establish hypotheses is something that requires a process of maturative development and learning, with both biology and experience being involved in its emergence.

Many authors have investigated how different skills and mental abilities emerge over the course of a lifetime, Jean Piaget being one of the most influential and important examples in recent times when it comes to the study of cognitive development. It is about this author that we are going to talk in this article, making a brief biography of Jean Piaget .

Jean William Fritz Piaget Jackson was born on August 9, 1896 in Neuchâtel, Switzerland. He was the firstborn son of Arthur Piaget, professor of medieval literature, and Rebecca Jackson, daughter of the owner of the first crucible steel factory in France.

His childhood was spent in an academic environment, acquiring and learning from his father a critical and analytical mentality as well as a taste for writing and a fascination for living beings . In contrast, the relationship with her mother was apparently neither easy nor positive.

From childhood Piaget showed signs of having a certain precocity, showing a great interest in mechanics, ornithology, molluscs and biology in general. He entered the Latin Institute in his town. While in secondary school at the age of ten, he would write and send an article on the Alpine sparrow to a local natural history magazine , this being his first contribution and scientific publication.

After that and during the adolescence it would awaken in the young man a great interest in zoology and molluscs. He came into contact with Paul Godel, director of the Museum of Natural History, whom he would assist for four years, after which he published various articles on malacology. His publications led to an offer of a position at the Museum of Natural History in Geneva , which he was unable to fill due to his young age (he had not yet finished his schooling).

After finishing his secondary education, Piaget entered the University of Neuchâtel, where he graduated in Natural Sciences and received his doctorate in 1918 with a thesis on malacology.

After that he decided to study at the University of Zurich , where for a semester he studied and began to acquire interest in psychology from the works of Freud or Jung. He began to work in psychology laboratories in that city and would even go so far as to produce two publications on the subject.

During that same year, 1919, Piaget moved to Paris as a professor of psychology and philosophy at the Sorbonne, where he met and worked with many important psychologists such as Binet and Bleuler . He would also go to work in a school run by Binet and Simon as a teacher, in Grange-aux-Belles. There he would begin to notice differences between the response patterns of adults and children, something that would lead him to think about the existence of different processes attributable to certain evolutionary moments.

In 1921 he published his first article on intelligence, which led to his being offered a job as director of the Rousseau Institute in Geneva. With this offer, something that led him to return to his country of origin From his position he would elaborate various works in which he worked on children’s reasoning, thinking or language. His academic participation continued to grow, and in 1922 he also attended the Congress of Psychoanalysis in Berlin (where he would meet Freud personally).

In 1923 he married Valentine Châteney, having three children with her. His paternity would be important not only on a personal level but also on a professional level , since it would be the observation and analysis of the growth and development of his children that (together with the influence of various previous authors and the carrying out of the different studies mentioned above), would lead him to the elaboration of his most well-known work: the cognitive-evolutionary theory in which he would expose the different stages of development and the constructivist theory.

In 1925 he would work as a professor of philosophy at the University of his native city, despite continuing at the Institut Rousseau. Likewise, together with his wife he would observe and analyse the development of their children . During 1929 he returned to Geneva to work at the university of that city as a professor of psychology and history of science. He would later go on to the University of Lausanne. While at the University of Lausanne, he taught psychology and sociology, and in 1936 he was appointed director of the International Bureau of Education of UNESCO. In 1940 he would begin to study aspects such as perception, working on aspects such as the development of spatial perception.

By 1950 Piaget would carry out the elaboration of genetic epistemology, another of his great contributions, in which he worked on the cognitive structures and the evolutionary and historical changes of the conscience-environment relationship . This contribution would lead to the generation of the cognitive schema concept and its constructivist theory in which he valued the biology-environment relationship in the formation of thought.

Five years later he founded and was appointed director of the International Centre for Genetic Epistemology, a position he would hold until his death. Throughout his life, Piaget received numerous honorary degrees and doctorates, as well as several international awards for his scientific contributions.

Jean Piaget died at the age of 84 on September 16, 1980, in Geneva, after about ten days in the hospital. His death is an event of great importance, being his legacy and his contribution to psychology one of the most extensive and relevant of the last century .

His theories on child development have influenced many well-known authors such as Bruner, Bandura, Ausubel or Erikson, and are still valued and taken into account at a theoretical level. He especially emphasizes the importance of his cognitive-evolutionary theory, on the development of cognitive abilities and in which he talks about the different stages of development. However, this is not the only field in which he worked but he also made various contributions in fields such as sociology, philosophy or even biology.