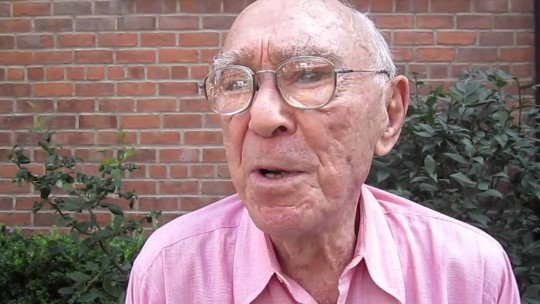 Jerome Seymour Bruner (United States, 1915 – 2016) is one of the psychologists who have most influenced the development of psychology in the 20th century, and for good reason. After obtaining his doctorate at Harvard University in 1941, he carried out a series of works and research on perception and learning that led him to confront behaviourists such as B. F. Skinner, who understood this process as a product of the memorization of appropriate (or “useful”) responses to certain stimuli.

When, during the 1950s, Bruner acted as the driving force behind the cognitive revolution that would lead to the creation of the Center for Cognitive Studies at Harvard and the consolidation of cognitive psychology, the crisis of the behavioral paradigm worsened and the cognitive current, which today is dominant in practically the entire world, began to take shape.

In addition to his contributions to cognitive psychology, Jerome Bruner has spent several decades teaching at both Harvard and Oxford, retiring from teaching at the age of 90.

Like many other researchers devoted to cognitive psychology, Jerome Bruner spent a lot of time studying the way we learn during our first years of life . This led him to develop a theory about three basic modes of representing reality, which are at the same time three ways of learning based on our experiences. These are the active model , the iconic model and the symbolic model .

According to Bruner, these models or modes of learning are presented in a staggered way, one after the other following an order that goes from the most physical and related to the immediately accessible to the symbolic and abstract. This is a theory of learning very much inspired by the work of Jean Piaget and his proposals about the stages of cognitive development.

The similarities between the ideas of Jerome Bruner and those of Piaget do not end there, since in both theories learning is understood as a process in which the consolidation of certain learning allows for the later learning of things that could not be understood before.

The active model proposed by Bruner is the first mode of learning, since is based on something we do from the first days of life: physical action , in the broadest meaning of the term. In this, the interaction with the environment serves as a basis for the acting representation, that is, the processing of the information about what we have near us that comes to us through the senses.

Thus, in Jerome Bruner’s active model, learning takes place through imitation, manipulation of objects, dancing and acting, etc. This learning method is comparable to Piaget’s sensorimotor stage. Once certain learning has been consolidated through this mode, the iconic model appears.

For Jerome Bruner, the iconic mode of learning represents the transition from the concrete to the abstract , and therefore presents characteristics that belong to these two dimensions.

The symbolic model is based on the use of language, either spoken or written . As language is the most complex symbolic system that exists, it is through this learning model that the contents and processes related to the abstract are accessed.

Although the symbolic model is the last to appear, Jerome Bruner stresses that the other two continue to occur when learned in this way , although they have lost much of their prominence. For example, to learn the movement patterns of a dance we will have to resort to the active mode regardless of our age, and the same will happen if we want to memorize the parts of the human brain.

Learning according to Jerome Bruner

Beyond the existence of these modes of learning, Bruner has also held a particular view on what learning is in general. Unlike the traditional conception of learning, which equates it to the almost literal memorization of content that remains “stored” in the minds of students and learners, Jerome Bruner understands learning as a process in which the learner plays an active role .

Starting from a constructivist approach, Jerome Bruner understands that the source of learning is intrinsic motivation, curiosity and, in general, everything that generates interest in the learner.

Thus, for Jerome Bruner learning is not so much the result of a series of actions as a continuous process based on the way the individual classifies the new information that comes to him to create a meaningful whole. Success in bringing together pieces of knowledge and classifying them effectively will determine whether learning is consolidated and serves as a springboard for other types of learning or not.

The role of teachers and tutors

Although Jerome Bruner pointed out that the apprentice has an active role in learning, he also put a lot of emphasis on the social context and, specifically, on the role of those who supervise this learning . Bruner, like Vygotsky, maintains that one does not learn individually but within a social context, which leads him to the conclusion that there is no learning without the help of others, be they teachers, parents, more experienced friends, etc.

The role of these facilitators is to act as a guarantor that a guided discovery is made whose engine is the curiosity of the learners . In other words, they must put into play all the means for the apprentice to develop his or her interests and obtain practice and knowledge in return. This is the basic idea of scaffolding .

It is therefore not surprising that, like other educational psychologists such as John Dewey, Bruner proposed that schools should be places that provide an outlet for students’ natural curiosity, offering them ways of learning through inquiry and the possibility of developing their interests through the involvement of third parties who guide and act as references.

Jerome Bruner’s research has led him to propose a spiral educational curriculum , in which the contents are periodically reviewed so that each time the contents already learned are reconstructed in the light of the new information available.

Bruner’s spiral curriculum graphically captures what he understands by learning: the constant reformulation of what has been internalized to make it richer and more nuanced as various experiences are lived.