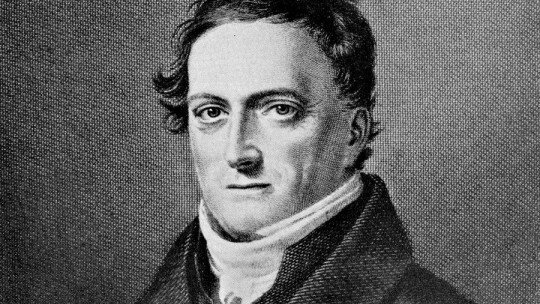 The life of Johann Friedrich Herbart is not very well known, although it should be noted that his way of educating and seeing how future adult learners should be made well adapted to the society in which they lived was somewhat advanced in his time.

Let’s see the history of this psychologist and philosopher from a biography of Johann Friedrich Herbart , with the key elements of his career.

Johann Friedrich Herbart was born on May 4, 1776 in Oldenburg, Germany. Due to an accident in childhood, was a child of frail health, which forced him to be educated by his mother at home until the age of 12.

After that, he entered the “Gymnasium” (German high school) of his city for six years, during which he showed a great interest in Kant’s philosophy . Later he would continue his studies in the city of Jena, where he would study philosophy under Johann Gottlieb Fichte, with whom he would have many conflicting opinions.

After living in Jena for three years, he began teaching the children of Herr von Steiger, who was the governor of Interlaken, Switzerland. It was from this experience that Herbart was motivated to consider how the way of teaching should be reformed .

While still on Swiss soil, Herbart had the opportunity to meet Johann Heinrich Pestalozzi, a Swiss educator who was involved in educational reforms in schools.

Herbart would begin to study Greek and mathematics on his return to Germany, specifically in the city of Bremen, for three years and then go to Göttingen, where he would remain from 1801 to 1809. It was during this period that he would give his first lectures on philosophy, in the year 1805 .

After living in Gönigsberg, he moved to Königsberg, where he directed a pedagogical seminar until 1833, when he decided to return to the previous city, where he remained until his death, working as a philosophy professor.

One anecdote about his death is that Johann Friedrich Herbart was in fairly good health even at the end of his days. In fact, only two days before he died suddenly from a stroke, he had given a lecture, the last one, and according to those present, he was in very good health.

He died on August 14, 1841, in the city of Göttingen . He was buried in the Albanifriedhof cemetery in the same city.

Thought and theoretical legacy of this researcher

In the following, we will look at some aspects of Johann Friedrich Herbart’s thought, all of which are closely related to his way of seeing and applying pedagogy.

According to Herbart, the pedagogy should emphasize the connection of the child with society , promoting his development with a useful purpose for the rest of human beings. That is to say, the intellectual and moral development of the child should be done in such a way that it transforms him, with the passage of time, into an adult who feels full and useful, a productive citizen for the whole of society.

According to Johann Friedrich Herbart, each child was born with unique potential. However, this potential would not be properly used if the child did not have the opportunity to receive a formal and regulated education, i.e. the school, and that this was well organized. Although the family and the church could transmit knowledge and values useful for daily life, only the school could guarantee a correct intellectual and moral development.

Within his educational method, Herbart considered that moral and intellectual education went hand in hand . They could not be separated and pretend to teach them properly without one depending on the other or without establishing links between the two conceptions.

According to him, if the nature of the human mind was something unitary, how could intelligence and morality be divided? To be able to instruct the spirit, that is to say, morality, it is necessary to construct it by means of learning and the fostering of intelligence.

However, the only way to guarantee that the educational process would be productive was to make the lessons interesting for the students . Johann Friedrich Herbart considered that it was a capital sin for the teacher to be boring and not to bother to capture the attention of his learners. Curiosity, liveliness in how classes are given, motivation and the desire to teach were extremely necessary in every lesson.

Herbart goes so far as to talk about different interest rates that a person may have with respect to an object of study.

It is the interest that derives from meditation on objects that have been experienced (seen, heard, tasted…). It is of a reflective type.

It is the one that occurs when observing something that is beautiful, either natural or made by human beings. It is of an emotional type.

It is born from the immediate perception of things, without attributing to them any emotionality or reflection . It is neutral.

Then would come three other types of interest that are more related to the type of human interaction that occurs between the individual and other people.

This is the interest rate that the infant shows when he or she is participating in activities with people around him or her . It can feel joy or pain, and it is the one that occurs in the sphere of family and school.

It is the one that occurs before an event in which several people are involved and in which cooperation is required.

According to Herbart, and having a very theological vision, it would be the interest towards the human spirit and divinity, which would serve to achieve a complete life .

The education I was defending

Herbart recommends getting students’ interest and spirit going, and preparing them for the new lesson. The method to be followed starts with the teacher preparing the topic in depth and seeing how it can be related to what was discussed earlier .

The teacher will then recall, with caution, the ideas presented in previous lessons, in order to get the students to establish a relationship on their own, not without first having summarized very briefly the theme of the new lesson.

Philosophical concept of the real

Herbart was one of the first thinkers to be aware of the importance of psychology in teaching, considering it a fundamental science for learning and promoting children’s character.

This researcher did not agree on how the knowledge was acquired according to Kant’s vision . Kant believed that knowledge was given by studying the innate categories of thought, while Herbart considered that one learns only through the study of external things and real bodies. It’s not that they are from before, or in a world of ideas or anything like that. Herbart went so far as to say: the world is a world of things by itself, and things by themselves are perceptible.

Herbart, like Locke with his tabula rasa, considered that the soul did not possess innate ideas or pre-established categories of thought , as was Kant’s opinion. The soul, considered as something real, was something passive at the beginning of its existence, being modified by external stimuli.