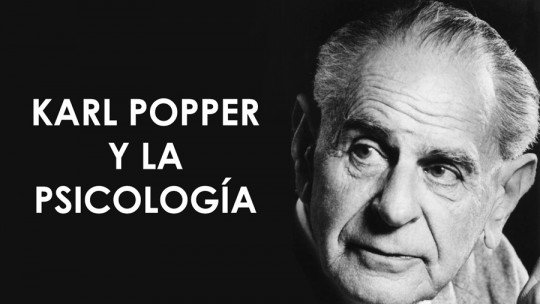 It is frequent to associate philosophy with a world of speculation without any connection to science, but the truth is that this is not so. This discipline is not only the mother of all sciences from a historical perspective; it is also the one that allows defending the strength or weakness of scientific theories.

In fact, since the first half of the 20th century, with the emergence of a group of thinkers known as the Vienna Circle, there is even a branch of philosophy that is responsible for overseeing not only scientific knowledge, but what is understood by science.

This is the philosophy of science, and one of its earliest representatives, Karl Popper, did much to examine the question of the extent to which psychology generates scientifically supported knowledge . In fact, his confrontation with psychoanalysis was one of the main causes of the entry into crisis of this current.

Who was Karl Popper?

Karl Popper was born in Vienna during the summer of 19002, when psychoanalysis was gaining strength in Europe. In that same city he studied philosophy, a discipline to which he dedicated himself until his death in 1994.

Popper was one of the most influential philosophers of science of the Vienna Circle generation, and his early works were very much taken into account when developing a demarcation criterion, that is, when delimiting a way to demarcate what is to distinguish scientific knowledge from that which is not.

Thus, the problem of demarcation is a topic to which Karl Popper tried to respond by devising ways in which it is possible to know which kind of statements are scientific and which are not .

This is a question that runs through the whole philosophy of science, regardless of whether it applies to relatively well-defined objects of study (such as chemistry) or others in which the phenomena to be investigated are more open to interpretation (such as palaeontology). And, of course, psychology, being in a bridge between neurology and the social sciences, is very much affected depending on whether one demarcation criterion is applied to it or another.

Thus, Popper devoted much of his work as a philosopher to devising a way of separating scientific knowledge from metaphysics and simple unfounded speculation. This led him to a series of conclusions that left much of what in his time was considered to be psychology in a bad place and that emphasized the importance of falsification in scientific research.

Although the philosophy of science was born in the 20th century with the appearance of the Vienna Circle, the main attempts to know how knowledge can be accessed (in general, not specifically “scientific knowledge”) and to what extent this is true appeared many centuries ago, with the birth of epistemology.

Positivism, or the philosophical doctrine according to which the only valid knowledge is scientific, was one of the consequences of the development of this branch of philosophy. It appeared at the beginning of the 19th century by the French thinker Auguste Comte and, of course, it generated many problems ; so many that, in fact, nobody could act in a way that was slightly consistent with it.

Firstly, the idea that the conclusions we draw from experience outside of science are irrelevant and do not deserve to be taken into account is devastating for anyone who wants to get out of bed and make relevant decisions in their daily lives.

The truth is that everyday life requires us to make hundreds of inferences quickly without having to go through anything like the kind of empirical contrasts needed to do science, and the fruit of this process continues to be knowledge, more or less accurate, which makes us act in one way or another.In fact, we don’t even bother to make all our decisions based on logical thinking: we constantly take mental shortcuts.

Secondly, positivism put at the centre of the philosophical debate the problem of demarcation, which is already very complicated to solve. How was it understood from Comte’s positivism that true knowledge should be accessed? Through the accumulation of simple observations based on observable and measurable facts. That is, is fundamentally based on induction .

For example, if after making several observations on the behavior of lions we see that whenever they need food they resort to hunting other animals, we will conclude that lions are carnivores; from individual facts we will reach a broad conclusion that covers many other unobserved cases .

However, it is one thing to recognize that inductive reasoning can be useful, and another to argue that by itself it allows one to arrive at true knowledge about how reality is structured. This is where Karl Popper comes in, his principle of falsifiability and his rejection of positivist principles.

The cornerstone of the demarcation criterion developed by Karl Popper is called falsificationism. Falsehoodism is an epistemological current according to which scientific knowledge should not be based so much on the accumulation of empirical evidence as on attempts to refute ideas and theories in order to find evidence of their robustness.

This idea takes certain elements from David Hume’s philosophy , according to which it is impossible to demonstrate a necessary connection between a fact and a consequence that derives from it. There is no reason to be sure that an explanation of reality that works today will work tomorrow. Although lions eat meat very often, perhaps in time it is discovered that in exceptional situations some of them are able to survive for a long time by eating a special variety of plant.

Moreover, one of the implications of Karl Popper’s falsehood is that it is impossible to definitively prove that a scientific theory is true and faithfully describes reality. Scientific knowledge will be defined by how well it works to explain things at a given time and in a given context, n or by the degree to which it reflects reality as it is, since knowing the latter is impossible .

Although Popper had certain clashes with behaviorism (specifically, with the idea that learning is based on repetition through conditioning, although this is not a fundamental premise of this psychological approach) the school of psychology that he attacked most vehemently was that of Freudian psychoanalysis , which during the first half of the twentieth century had much influence in Europe.

Fundamentally, what Popper criticized of psychoanalysis was its inability to stick to explanations that could be falsified, something he considered to be cheating. A theory that cannot be falsified is capable of contortion and of adopting all possible forms as long as it does not show that reality does not fit with its proposals , which means that it is not useful for explaining phenomena and, therefore, it is not science.

For the Austrian philosopher, the only merit of Sigmund Freud’s theories was that they had a good capacity to perpetuate themselves, taking advantage of their own ambiguities to fit into any explanatory framework and to adapt to all the unforeseen without being called into question. The effectiveness of psychoanalysis did not have to do with the degree to which they served to explain things, but with the ways in which they found ways to justify themselves .

For example, the Oedipus complex theory does not have to be resented if, after having identified the father as a source of hostility during childhood, it is discovered that in fact the relationship with the father was very good and that there was never any contact with the mother beyond the day of birth: simply, other people are identified as paternal and maternal figures, since since psychoanalysis is based on the symbolic, it does not have to fit into “natural” categories such as biological parents.

In short, Karl Popper did not believe that psychoanalysis was not a science because it did not serve to explain well what happens, but for something even more basic: because it was not possible to even consider the possibility that these theories are false .

Unlike Comte, who assumed that it was possible to unravel faithful and definitive knowledge about what is real, Karl Popper took into account the influence that the biases and starting points of different observers have on what they study, and therefore understood that certain theories were more of a historical construct than a useful tool for science.

Psychoanalysis, according to Popper, was a kind of mixture of the ad ignorantiam argument and the fallacy of the request for principle: it always asks for the acceptance of certain premises in advance in order to demonstrate that, as there is no evidence to the contrary, they must be true .That is why he understood that psychoanalysis was comparable to religions: both were self-confirming and based on circular reasoning to get out of any confrontation with the facts.