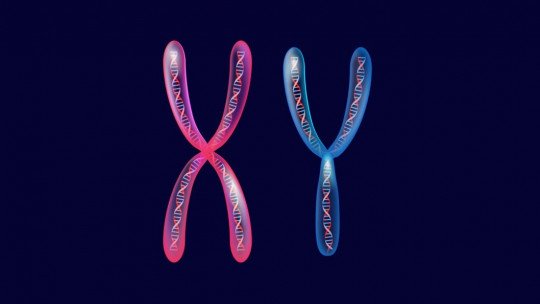 Genetic disorders are those caused by an alteration in the chromosome or genes. One such disorder is Klinefelter’s Syndrome, a syndrome that appears only in males , and is characterized by males having XXY chromosomes instead of XY.

This extra X originates different symptoms and on different levels (physical, behavioural, personality level…). In this article we will see what the syndrome consists of, what its usual symptoms are, its causes and possible treatments to be applied.

Klinefelter’s Syndrome: what is it?

Klinefelter syndrome is a genetic disorder that affects only males. It is caused by a random error in the chromosomes. Specifically, an extra X is created on the male sex chromosomes. As a result, the male, instead of having XY, has XXY, which leads to a number of characteristic signs and symptoms, such as smaller testes and reduced or absent testosterone .

This syndrome affects 1 in 500-1,000 babies born. In terms of risk factors, only the fact that the mother is over 35 years old when she becomes pregnant is known as a risk factor. However, it is a factor that only slightly increases the likelihood of Klinefelter syndrome. 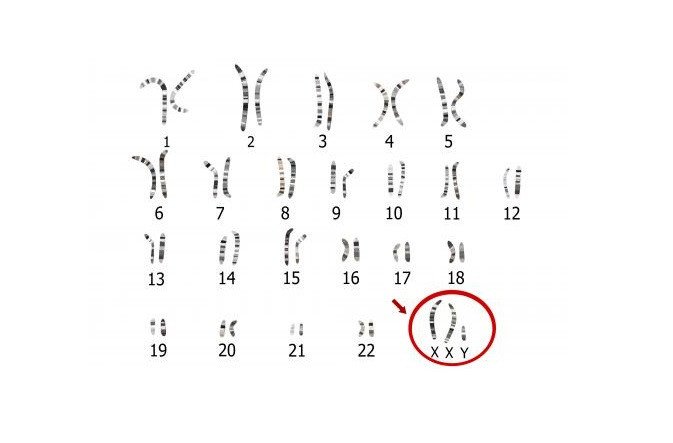 The signs and symptoms of Klinefelter syndrome can vary greatly from person to person. Also, depending on the age group, the symptoms will be one or the other. On the other hand, symptoms often go undetected until adolescence or adulthood.

Generally, the common symptoms that cause this syndrome are smaller than normal testicles and a smaller penis. Also, in this case the testicles are firm. On the other hand, enlargement of breast tissue (gynecomastia) and weakness of muscles and bones may occur.

These mentioned symptoms appear in general in all ages, but let’s see which are the typical symptoms of Klinefelter syndrome in each age group .

During birth and as infants, the usual symptoms of Klinefelter syndrome are some delays, especially in speech and motor development . Thus, these babies may take longer than usual to sit up, crawl and walk.

On the other hand, there is the muscle weakness already mentioned, as well as testicles that do not descend into the scrotum. On a behavioural level, they are usually babies who do not speak much and who present a docile behaviour.

As they get older, and especially during childhood and adolescence, other symptoms appear, such as altered puberty (which may be absent, delayed, or incomplete).

Physically, they are taller than average, with longer legs, shorter torso and wider hips. Their penis and testicles are smaller, and they may also have gynecomastia (enlargement of breast tissue).

When they grow up, adolescents with Klinefelter syndrome may have less facial and body hair than adolescents their age . They continue to have muscle weakness; this weakness also appears in the bones.

On the other hand, they may have some kind of learning difficulty related to mathematics, writing, reading and/or spelling. On a behavioural level, they tend to be somewhat apathetic children and adolescents with low energy levels. As for their personality, they may have problems expressing their feelings or interacting with others, being generally shy and especially sensitive.

In adulthood, men with Klinefelter’s syndrome continue to have the above-mentioned muscle and bone weakness, as well as symptoms of gynecomastia and small penis and testicles . They also tend to be taller than usual. On the other hand, they still have less body and facial hair than expected. In addition, they have an increase in fat in the abdomen.

At this stage, however, the most characteristic symptom that usually worries people with the syndrome the most is the low amount of sperm secreted, due to the decrease in the size of their testicles.

In some cases, they may not even secrete any sperm at all. This affects their fertility and makes it difficult for them to have children; however, with proper reproductive methods they can have children (for example with assisted reproduction techniques). Finally, adults with Klinefelter’s Syndrome also have a low sex drive, that is, a low sexual desire.

As we have seen, Klinefelter syndrome is a genetic disorder caused by a random error in the chromosomes. In other words, it is not an inherited disorder (it is not transmitted from parents to children), but rather a genetic alteration.

Most people have 46 chromosomes (23 pairs of chromosomes), which contain our genetic material (DNA). DNA defines our phenotype (i.e., our physical, personality, behavioral characteristics, etc.); that is, it shapes “who we are” and “how we are. Of these 46 chromosomes, 2 are sexual; in most women, these two are XX, and in most men, these are XY (therefore it is the Y that determines sex).

In the case of Klinefelter syndrome, however, the genetic alteration causes affected males to be born with an “extra” X chromosome, and instead of having XY on their sex chromosomes, they have XXY.

A first possibility is that the “extra” X will appear in all the cells of the affected male. In this case, the symptoms will be more pronounced.

A second possibility is that the “extra” X appears only in some of the person’s cells. This way, the symptoms would be milder. It would be called Klinefelter’s Mosaic Syndrome.

Finally, it may happen that instead of the “extra” X, more than one extra X appears. In this case, the chromosomes instead of being XXY, would be XXXY, for example. These are rare cases, which appear very infrequently. Logically, at a symptomatic level the symptoms would be much more noticeable.

There are different therapies that can be performed, depending on the signs and symptoms of each patient. Some of them are:

Testosterone replacement therapy is aimed at stimulating the typical changes that appear during the stage of puberty . This therapy can improve bone and muscle density, as well as stimulate the growth of body hair, enlarge the size of the penis, and change the tone of voice to a deeper one.

However, it is not effective in treating fertility or increasing the size of the testicles.

In cases where a speech delay occurs, speech therapy can be used to stimulate and facilitate the expression of oral language .

In case there is a need for psychological assistance , the psychological intervention will be focused on treating the personal and social difficulties of the child, adolescent or adult with Klinefelter syndrome. On the other hand, infertility caused by the syndrome itself, is a problem that affects men especially, so it should be addressed whenever the patient requires it.

Finally, in the event that learning difficulties appear (as we have seen, somewhat frequently), a good treatment option will be personalized pedagogical re-education . Different educational support strategies may also be employed.