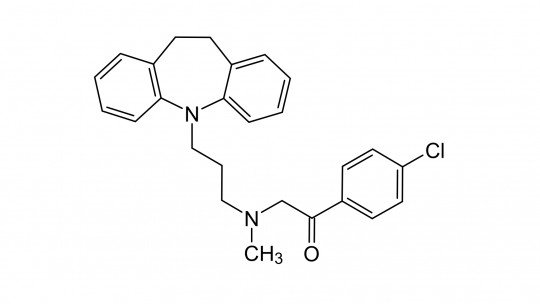 Tricyclic antidepressants are a group of drugs used in the treatment of depressive symptoms.

Lofepramine is one of them: this drug exerts its therapeutic effect on mood through the inhibition of several neurotransmitters, mainly noradrenaline and serotonin. But like the vast majority of tricyclic antidepressants, it is not without its adverse reactions and side effects.

In this article we explain what lofepramine is and how it works , what medical uses it has, what its main side effects and contraindications are, as well as its clinical efficacy compared to other similar antidepressants.

Lofepramine is a drug that belongs to the group of tricyclic antidepressants. It was developed by Leo Pharmaceuticals, a Swedish pharmaceutical company, and marketed in the 1980s as a treatment for depression, under the trade names Gamanil, Lomont, Tymelyt, among others.

It has been suggested that lofepramine may act largely as a prodrug (an inactive compound that, once metabolized, becomes active) of desipramine, another tricyclic antidepressant that acts primarily by inhibiting noradrenaline reuptake. As with the vast majority of tricyclic antidepressants, inhibiting the reuptake of monoamines (serotonin, dopamine, noradrenaline, etc.) is how they exert their therapeutic effect.

The initial therapeutic dose of lofepramine is usually 70 mg, twice a day . However, the dose is usually increased gradually and the patient may take between 140 mg and 210 mg daily. This drug does not have the addictive potential of other tricyclic antidepressants (e.g. amineptine) and does not cause sedation. At the beginning of treatment with lofepramine, a certain activating effect may be experienced, which some depressed patients find unpleasant.

Lofepramine is a potent and selective noradrenaline reuptake inhibitor and a moderate serotonin reuptake inhibitor. It also acts as a weak antagonist of acetylcholine receptors (the muscarinic type). This medicine has less anticholinergic and antihistamine properties than amitriptyline, one of the classic tricyclic antidepressants.

As noted above, lofepramine is widely metabolized to desipramine; however, this fact is unlikely to play a substantial role in its overall effects, since this antidepressant exhibits lower toxicity and anticholinergic side effects relative to desipramine, while retaining equivalent clinical efficacy.

After oral administration, the drug is rapidly absorbed and maximum plasma concentrations of lofepramine and desipramine are reached within 1 hour and 4 hours, respectively. The plasma elimination half-life of this antidepressant is quite short; however, the long elimination half-life of desipramine (12 to 24 hours) may lead to accumulation of the drug with repeated administration, an aspect to be taken into account when starting treatment.

The most common adverse reactions after the use of tricyclic antidepressants include anxiety, agitation, insomnia, abnormal sensations or paresthesia, arterial hypotension , dizziness, irritability and confusion.

These symptoms are shared by lofepramine, which can also cause the following side effects of its own (the frequency of which is not known for sure).

Effects on the heart after lofepramine use may include: arrhythmias, changes in the electrocardiogram (the graphic representation of the heart’s electrical activity as a function of time), abnormal heart rhythm, heart block, sudden heart death, and high heart rate.

Although the frequency of these blood disorders is unknown, abnormal blood cell counts, sugar changes, and low blood sodium levels may occur.

Continued use of lofepramine can cause breast enlargement, even in males. In addition, there may also be a spontaneous discharge of breast milk that is not related to breastfeeding or pregnancy.

5. Effects on the skin

The use of lofepramine can also cause skin disorders such as: abnormal or excessive sweating, hair loss, hives, itching, increased sensitivity to light, and rashes.

In order to use lofepramine with caution, it is recommended to pay attention to the following contraindications:

Clinical trials have shown that lofepramine is an effective antidepressant, with an onset of action of less than 2 weeks when administered at doses of up to 210 mg per day to patients with various types of depression.

Double-blind controlled studies have shown that its overall antidepressant efficacy is significantly greater than placebo , and comparable to that of imipramine, amitriptyline, clomipramine, maprotiline, and myanserine.

In three studies conducted over 6 weeks involving depressed patients, lofepramine produced reductions in Hamilton depression scale scores of approximately 60%, which were similar to those produced by imipramine and amitriptyline, and greater than those produced by clomipramine. In addition, the results of two noncomparative multicenter studies conducted in 4 weeks concluded that lofepramine has significant anxiolytic efficacy, in addition to its antidepressant properties.

Finally, note another six-week, double-blind, randomized study in which paroxetine was compared to lofepramine in the treatment of 138 patients with major depressive disorder. The results showed that the antidepressant efficacy of lofepramine was comparable to that of paroxetine in the treatment of depressed patients, and similar improvements were obtained in both groups in the mean total scores of the Montgomery-Asberg scale for depression.