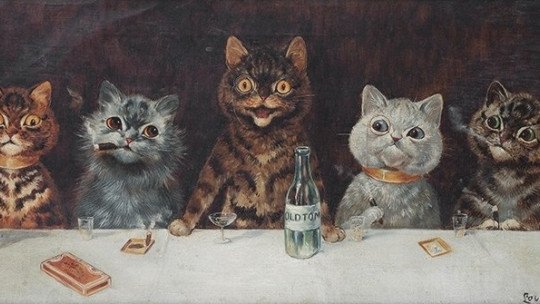 The writer H. G. Wells once said that the cats of England which do not look like the cats painted by Louis Wain , are ashamed of themselves.

No wonder: Louis Wain was one of the most renowned artists of the Victorian era, and everyone knew and loved his funny depictions of cats acting and expressing themselves as human beings .

Louis Wain: a journey into the work of an artist obsessed with cats

However, Wain has not gone down in history simply because he was a good painter. He is also one of the classic examples used to show how schizophrenia, a mental illness that could have been captured in his latest paintings, changes people. Your fondness for cats

Louis Wain liked to draw animals since he was young. He never missed an opportunity to create representations of the living beings he saw and the bucolic scenes in which they were involved. However, it was when his wife fell ill with cancer that he started drawing what would characterize his work.Cats.

Specifically, cats adopting attitudes and activities typical of human beings. At first, though, shyly: the cats I painted at this stage have the anatomical characteristics of normal cats, but they try to adapt their bodies to human tasks, like reading the newspaper or smoking. Wain drew these cats to encourage his wife in her last years of life, and for that he resorted to portraying his cat Peter in somewhat ridiculous situations.

Louis Wain began drawing and painting clearly anthropomorphic cats shortly after his 30th birthday . In these images, of a markedly comic tone, cats were a means by which their creator caricatured the English society of the time: cats waving to each other, smoking, organising drinking parties, playing golf… In fact, Wain used to go to crowded places, such as squares or restaurants, and portray people he saw as if they were cats acting just like the people he was seeing.

Almost everything Louis Wain drew was so funny that the painter had to change his style almost nothing when he had to illustrate some children’s books, also using the figure of anthropomorphic animals.

The stage of decline

Louis Wain was famous and admired throughout England, but was far from rich . In fact, he earned very little from his own work, as he sometimes worked almost for free, and he also spent part of the money on supporting his family. He soon began to have so many financial problems that he had to emigrate to the United States, from where he returned even poorer.

The situation became more complicated when Wain began to show symptoms of mental pathology. Although the development of psychiatry in the early 20th century does not allow us to know much about the painter’s mental illness, today it is believed that Louis Wain developed schizophrenia , although some researchers point out that he was more likely to meet the diagnostic criteria for Autism Spectrum Disorders.

His confinement in a frenopathic

Wain was first admitted to a psychiatric institution in the mid-1920s , when his behavior had become so erratic and occasionally aggressive that he had difficulty relating to even those in his most intimate circle. However, this detention centre was in such a bad state that several important personalities, including H.G. Wells and the Prime Minister of the United Kingdom himself, intervened to have him sent to a better place.

Thus, Louis Wain arrived at Bethlem Royal Hospital, a place that had a garden and a cheerful cat colony. He would spend the last 15 years of his life in this place.

Journey to the abstract

The Louis Wain of Bethlem Royal Hospital was, of course, different from the affable painter who liked to mingle with people and who had been spoiled by all the newspapers in the country. But he had not only changed: he had also, it seems, changed his work . The dates of his paintings that were made years after his death show a clear pattern in his paintings, which range from figurative art in which animals appear acting like people to very abstract combinations of lines and colours and which are hardly reminiscent of anything that exists on our plane of reality. Kaleidoscopic forms, a wide variety of colours and fractal or symmetrical motifs appear in these paintings. They look like paintings from another planet, or based on the mythological folklore of some Asian culture.

That’s why Louis Wain’s work is often used as an example of how the way some people with schizophrenia perceive reality progresses.

However, if it is true that these abstract paintings correspond exclusively to the period in which schizophrenia had greatly limited Wain’s capacities, we can also take this story as an example of personal improvement . Art can also bear witness to people’s creative impulses, and although the English painter’s paintings may have varied incredibly to the point of appealing to logics and rules of representation that only he understood, they are nonetheless proof of an acute artistic genius that continued to develop even under the harshest conditions.