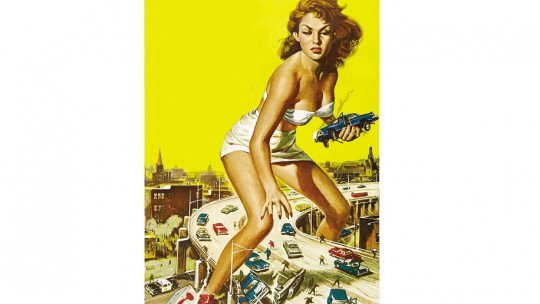 Throughout history, human beings have imagined a great diversity of fantastic creatures, generally with the purpose of trying to explain through various narratives unclear or unexplainable aspects of reality. These creatures are part of the mythology of different cultures, and often possess powers that far exceed us. Centaurs, furies, mermaids, fairies… and giants.

These latter creatures are usually synonymous with power and strength, often surrounded by an aura of voracity, bestiality and horror. But for some people, the giants and the behaviors attributed to them are also a source of fascination and even sexual gratification. We are talking about people who suffer from the paraphilia known as macrophilia or gigaphilia , which we are going to talk about next.

Macrophilia: the attraction for giants

The sexual attraction to giants (regardless of their sex) or the idea of being devoured or crushed by them is called macrophilia. We are dealing with a type of sexual attraction linked to fantastic beings that do not exist in real life, something that makes this sexual preference generally limited to fantasy and onanism.

It is necessary to take into account that having occasional fantasies of this type can be, although relatively rare (although pornography websites state that content of this type enjoys a certain popularity) not pathological, and can serve as a fetish without further ado.

However, it becomes a paraphilic type problem when the sexual fixation by the giants becomes the only stimulus capable of generating sexual excitement, or it generates discomfort or it becomes an element that limits a person’s life (for example, not being able to enjoy couple relationships or occupying a high percentage of their thinking and behavior on a daily basis) in a period of at least six months of duration.

There are different preferences regarding this type of paraphilia, one of the most common being the fantasy that a normal-sized woman or man starts to grow by tearing off her clothes, the room and/or the building she is in. Another of the most common fantasies has to do, as we have already said, with crushing or the idea of being devoured: the idea that the giant in question proceeds to destroy the environment and crushing or eating people becomes sexually suggestive for these subjects.

Fantasy also can be related to the fact that the subject in question is shrunk to a tiny size while his object of desire retains its usual measurements, the important thing being the perception of differences in size or power.

Generally, those who have this type of paraphilia are usually heteroseusal men (whose object of desire is giant women), but there are also heterosexual women and macrophilic homosexual men whose attraction is to giants, as well as homosexual women whose object of desire is also gigantic. In fact, macrophilia transcends sexual orientation itself , and heterosexual or homosexual subjects can be attracted to entities of the opposite sex to that of their preference for the fact of being giants.

Macrophilia is a very particular paraphilia, since the object of desire of people who feel this sexual attraction is non-existent in reality. Thus, a person with macrophilia does not mostly have the possibility of putting into practice his or her sexual fantasies, limiting himself or herself to fantasizing about an interaction with these beings and/or masturbatory practices.

As a rule, this fact is known by macrophiliacs and is not the result of any loss of the sense of reality. This does not imply, however, that in some cases there may be a loss of contact with reality derived from substance use or from some neurological or psychiatric disorder, but this would be a coincidence and not something that defines macrophilia itself.

The cinema, internet and new technologies have also allowed people with this sexual preference to find highly exciting material for themselves. There are even videos and photographs in which perspective, optical effects or image-modification programs are played with to make actors or actresses appear larger than even a building, or in which toys such as tin soldiers are used to depict scenes of crushing or destruction.

In this sense, the basic idea of macrophilia has a lot to do with sadomasochism and the games of domination-submission: a giant is a force of nature to which one is insignificant, a raw power capable of destroying us and to which one can only submit or be destroyed.

Thus, a possible explanation for this type of paraphilia is linked to the need or desire to be subdued and/or to lose all control of the situation. This explanation seems to correlate with the fact that many of the people who fantasize about this type of object of desire are powerful people, responsible for large, dominant and competitive corporations who may wish to reverse their usual role. In addition, in some cases there may also be links with dangerous or even criminal paraphilias such as voraephilia (sexual arousal derived from fantasy or the practice of acts of cannibalism).

Other types of theories could be linked to the existence of childhood trauma derived from sexual abuse during childhood, or from the presence of sadistic, restrictive and aggressive parents. In this case, the subject could end up normalizing and associating these behaviours with sex by people who exceed him in strength and size, being able in some cases to develop sexual fantasies with beings capable of destroying them once they are adults.

Finally, other authors consider that in the case of sexual preference for giant women (whether they are fantasies of men or women) there could be a sexual desire for empowered women, capable of dominating, crushing and overcoming traditional gender roles that saw the female sex as inferior and weak.

When it comes to intervening, first of all we must evaluate the type of fantasies that the subject has and the meaning that is given to them, what is exciting about them and where he considers the subject to come from. The existence of possible traumatic or aversive experiences in the subject’s life that have made him feel incapable or impotent can also be assessed, or that have meant a great inhibition of his own psyche and the need for excessive control of the situation.

On this basis, elements such as cognitive restructuring could be required in order to modify possible dysfunctional beliefs such as the need to control everything or the idea of being useless or the need to be stepped on/destroyed/manipulated in order to maintain human contact.

Training in emotion management could also be positive for those people suffering from some kind of self-management problem, as well as working on self-esteem. If there is a traumatic event, it should be treated in a specific way according to each case. In addition, the possible difficulties or limitations that this type of sexual attraction may have in daily life should be worked on.

Beyond this, aspects such as the search for the development of positive links with respect to non-paraphilic stimuli can be worked on with techniques such as masturbatory reconditioning, as well as the derotization of the paraphilic stimulus.

However, it should be noted that only in cases where these fantasies involve a major functional limitation or discomfort in the subject himself, we would be talking about a paraphilia that could require treatment, the mere fantasy being an occasional and non-exclusive sexual preference that should not be considered pathological.