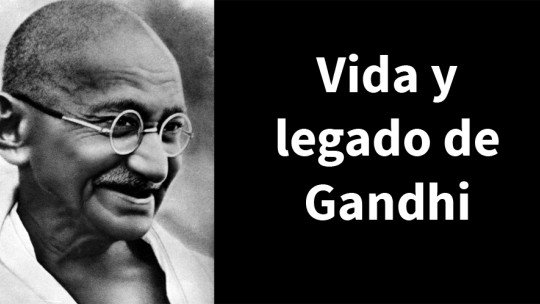 Mohandas Karamchand Gandhi; is the name of one of the most recognized and influential spiritual leaders of recent times, who actively participated in the achievement of Indian independence and would become especially known for his belief in peaceful resistance and non-violence. Better known as Mahatma Gandhi, the figure of this spiritual leader is still revered by many today.

Next we will give a brief review of the life of this referent of non-violent political action, which has changed the way of thinking of a good part of the inhabitants of the planet.

To understand who Mahatma Gandhi was, it is first important to understand how his ideas developed. Let’s start with his early years, which serve to understand the context in which he was educated.

Mohandas Karamchand Gandhi was born in 1869 in the city of Porbandar, in the northwest of India . His father was Karamchand Gandhi, prime minister of the city and a member of the merchant caste. His mother was Putlibai Gandhi, a deeply religious woman who passed on to him respect for different beliefs and ways of life and who came from the pranami, a religious tradition that mixed the precepts of Hinduism and Islam.

In his childhood and adolescence Gandhi was a withdrawn young man who did not stand out academically . He married a woman of the same age called Kasturbai at the age of thirteen, in an arranged marriage. Mohandas would fall in love with her.

Later Gandhi moved to London to study law at University College . There he would finish his degree and, in addition, would be able to read various classics of both Western and Eastern literature (notably books such as Bhagavad Gita and the reading of Tolstoy’s works) and contemplate the Western point of view on his land.

As for the spiritual and religious facet it would be influenced by a great number of different religions and beliefs: in addition to Hinduism it would be influenced by Islam, Christianity, Buddhism and Jainism (the latter advocated non-violence and respect for both living beings and the different elements, this being an aspect that it would use as a basis in its political struggle). For Gandhi all these beliefs had in common the idea of renunciation.

After finishing law school, he returned to his home country shortly after his mother’s death where he began to practice law . However, his first professional experiences were extremely negative, and he did not enjoy great success. He was offered a contract in South Africa, which led him to move with his family to the country in 1893.

Once in the African country, Gandhi observed the high degree of discrimination against Hindus , suffering himself numerous humiliations and humiliations. After fulfilling his contract, he learned of the creation of a new law that would withdraw the vote from the Indian population. This would lead to his decision to postpone his return to his native country, which did not occur until more than two decades later.

After elaborating various petitions to the colonialist government that were not heard, he would decide to help the Indian community in the country through various means: opening law firms, founding newspapers and organizing the Indian Party of the Natal Congress. All this would help to make visible the abuses committed against its people by the British .

At this time he would read Western authors and thinkers who influenced his thought, finishing forging his ideals regarding respect for all creatures regardless of their opinion, religion or social condition and the usefulness of the struggle through non-violence .

Later, after the worsening of the situation of the Indian population and the drafting of a law requiring Indians to register , he would start to employ and encourage non-violent resistance and civil disobedience . Despite being imprisoned on several occasions and the fact that the protests were harshly repressed by the government (including torture and executions), the country received severe pressure from abroad that would eventually lead to the negotiation of a solution with Gandhi in 1913, the Smuts-Gandhi pact. Thus, the peaceful resistance and the different organized marches would end up succeeding,

It was also at this time that he decided to become celibate , a fact facilitated in part by the feeling of guilt he felt when his father died while he was having sex with his wife.

Return to India: the struggle for peace continues

In 1914, Gandhi and his family returned to India, traveling throughout the country and dedicating themselves to different causes, such as the struggle for free cultivation or the reduction of taxes. Mohandas would begin to be called Mahatma (whose meaning in Sanskrit is “great soul”) at that time, this nickname being thought of by the poet Tagore.

Thus, Gandhi began to fight to eliminate the caste system that had existed until then , using methods such as hunger strikes to achieve agreements such as the cessation of separate voting for outcasts and the rest of the Hindu population.

Also would start to be interested in achieving the independence of his country . The arrival of the First World War in 1914 caused Gandhi to consider it necessary to support the British in their struggle, believing in the need for the people of India to be represented in the conflict.

However, the approval of Rowlatt’s law according to which any act that could be considered sedition through the arrest without a warrant of any suspect would be strongly persecuted would generate a great controversy and concern and that generated in the population several protests, which were harshly repressed in the massacre of Amritsar .

All this would cause Gandhi to decide in 1919 to take an active part in the search for the country’s independence and to make use of peaceful resistance and civil disobedience. Among other actions, he helped to organize the congress and fed different marches, such as the so-called salt march of 1930 , originated due to the high taxes around this matter. Mohandas would go to prison many times during this period.

The advent of World War II in 1939 also led to a greater quest for independence by Gandhi and India in general, as they were unilaterally included in the conflict by the British without the opinion of the people. This generated a deep resistance movement and the desire to end British rule over the country.

As a result, there was a high number of arrests, including that of Gandhi, and the death of a large number of demonstrators. During his stay in Kasturbai prison, his wife died . Gandhi was released before the end of the war because he was weak and sick. After the end of the war, Great Britain would decide to withdraw from India for good.

The advent of independence and conflicts between Muslims and Hindus

In 1947 India was finally declared independent. Gandhi and many others wanted to achieve a united India, but part of the Muslim sector of the country would refuse this as they were a minority, asking for the separation from Pakistan . This would end up triggering different armed conflicts between Hindus and Muslims. In response, the government decided to divide the territory into two countries, India and Pakistan.

Gandhi carried out several marches in order to stop the bloodshed and restore peace, despite the fact that both sides tried on several occasions to attempt his life. He would later go on a hunger strike for this purpose. Five days after the strike, the leaders of the various parties agreed to cease hostilities.

Mahatma Gandhi was killed in 1948, in Delhi , hours after he was shot several times on his way to pray. The executor of the crime was Nathuram Godse, a member of an extremist Hindu organization that opposed freedom of religion and considered Gandhi a traitor because of his advocacy of peace between Hindus and Muslims.

After the death of the spiritual leader the government would decree thirteen days of mourning. His body was cremated and his ashes were placed in numerous urns that would be distributed throughout India, many of them scattered in the rivers of his land.