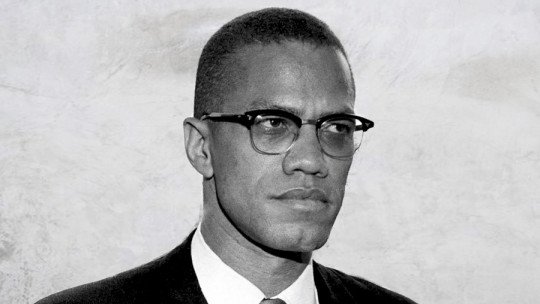 Malcolm X is one of the most important, yet controversial, figures in black history. An advocate for the rights of African Americans and highly critical of the white powers in the United States, he promoted contact between blacks and their African roots.

His life is fascinating and, although not everyone likes it, his political project for the black race has been the spark for the creation of black nationalism. Let’s take a closer look at his life through this biography of Malcolm X in summary format.

Malcolm X’s life is very intense, as is his activity as an advocate for the rights of African Americans and a defender of the Islamic faith.

The birth name of Malcolm X was Malcolm Little and he was born in Omaha , Nebraska, United States, on May 19, 1925. He was the son of a Protestant pastor and a mulatto woman who had been born as a result of a rape by a white man of a black woman. Malcolm X’s childhood was hard. He had to live with the constant moving of his family, which suffered constant aggression from racist groups.

As a child, he lived through the murder of his father, a staunch defender of workers’ rights. After this misfortune, Malcolm’s mother was admitted to a psychiatric hospital, because she lost custody of her children after her husband died.

After these events, the man who was still called Malcolm Little moved from house to house, living the hard conditions with which the blacks were treated , who did not have the support of his family.

He moved to New York, where he became a street criminal. He became involved in shady activities, such as drug trafficking, robbery and prostitution. Later he would be involved in the affairs of the Boston and New York underworld. However, in 1945 he was arrested and sentenced to eight to ten years in prison.

Entry into the Nation of Islam

During his stay in prison he gave up drugs and started studying by correspondence . It was during the seven years he was imprisoned that he came into contact with an organization, influenced by other prisoners, that would be fundamental for the rest of his life and in the formation of his thought: the Nation of Islam.

This organization was a Muslim religious movement that was led by Elijah Muhammad in which the idea was postulated that Allah’s favorite race was black and that whites were the personification of the devil, a race doomed to imminent disappearance.

In 1952, after leaving prison, Malcolm visited the leader of the Nation of Islam in Chicago, Illinois. It was during the course of this visit that Malcolm Little would sacrifice his family name for that of a simple X, an act loaded with meaning. The X symbolized the African surname lost by the blacks when a white master enslaved one of his ancestors .

Malcolm X’s influence within the organization was not long in coming. In 1953, he was appointed assistant to the minister of the Nation of Islam’s Number One Temple in Detroit and, by the end of that year, he founded Temple Eleven in Boston.

The following year he would found the Number Twelve in Philadelphia, and would be chosen to lead the Number Seven temple in Harlem. He would also be the founder of the newspaper Muhammad Speaks.

The organization was contrary to many ideas defended by the Civil Rights Movement . It defended the idea that blacks and whites should remain separate. In fact, they defended the idea of the creation of a new country, made up exclusively of black people in the south of the United States, as an interim measure so that blacks could return to Africa.

Malcolm X, already a minister of the Nation of Islam, defended that the black race was the original race of mankind, and that the true religion of black mankind was Islam, while Christianity was the religion of the white man. He defended that Wallace Fard Muhammad, the founder of the organization, was the personification of Allah and that Elijah Muhammad was his messenger.

But not only did his opinion and his membership in a black supremacist organization arouse controversy. The FBI opened an investigation into Malcolm X in 1953 because he had declared himself a communist , something very controversial in the midst of the Cold War.

Meeting with Fidel Castro and other world leaders

If the FBI already had its suspicions about Malcolm X’s communist activities, Fidel Castro’s visit to New York in 1960 was a clear indicator of his sympathies against American capitalism. Fidel Castro had set foot on American soil with the intention of meeting at the United Nations General Assembly. Because of Malcolm X’s impressive statements as an active member of the Nation of Islam, Fidel Castro wished to meet with him privately.

Also, at the same General Assembly, Malcolm X was invited to visit events held by newly independent African nations , including Gamal Abdel Nasser of Egypt, Ahmed Sékou Touré of Guinea and Kenneth Kaunda of the African National Congress of Zambia.

Abandonment of the Nation of Islam

Given the controversial opinions of Malcolm X, the media presented him as an apostle of violence , in addition to emphasizing his message of rejection of the white man and showing him as a supremacist, but African-American.

On December 1, 1963, he was asked his opinion regarding the assassination of President John F. Kennedy, implying that he was happy about the event. Also, when asked about the assassination of black rights activists Patrice Lumumba and Medgar Evers and the bombing of the 16th Street Baptist Church in Birmingham, Alabama, he came to say the same thing as with President Kennedy.

These comments provoked the anger of society, both black and white. Even the Nation of Islam had issued a message of condolence to the Kennedy family and instructed its ministers not to comment on the assassination. The Nation of Islam publicly censured Malcolm X and, despite keeping his position, he was banned from public speaking for 90 days.

But the rivalry within the organization between Elijah Muhammad and Malcolm X made the former organize more effective ways to shut him up. An assassination plot began to be orchestrated. Suspecting this, Malcolm X decided in 1964 to officially break with the organization, saying that the Nation of Islam had become too rigid with its religious doctrine.

At this time he opted for an even more active political struggle, denouncing that neither the individual reform actions of the Nation nor Martin Luther King’s civil rights campaign would lead to black liberation. Violence was necessary. It was then that founded the Muslim Mosque movement (Muslim Mosque, Inc.) within American society.

Malcolm X wanted to fulfill the religious precept of making a pilgrimage to Mecca, taking advantage of the occasion to visit seven Muslim countries. It was during this trip that he changed his racial stance, understanding that the twinning of all races was possible .

So he stopped preaching separatism and segregation and moved to a position more in favour of black nationalism, as opposed to the white nationalism on which the United States of America was based.

His visit to several Muslim countries allowed him to have contact with the Sunni , who encouraged him to learn in depth about what Islam was according to them.

Despite his friendlier view of the relationship between races, he did continue to advocate that African Americans had every right to defend themselves against attackers in a proportionate manner, with all necessary violence. He continued to reject the pacifist message of non-violence of the civil rights campaign.

His popularity remained high, and he went on to give several lectures on many university campuses, emphasizing the opportunity he had to talk to university students and make them understand his struggle. He also spoke to political parties, including the Socialist Workers Party (SWP), the largest Trotskyist party in the U.S.

The leadership of the Nation of Islam was already considering ending Malcolm X’s life even after he left the organization. He was also the victim of threats made anonymously, calling him and his wife saying he deserved to be dead.

In June 1964 the Nation of Islam filed a lawsuit against him claiming Malcolm X’s home in Queens . The organization was successful, and Malcolm X was ordered to vacate the house.

On February 14, 1965, the night before a hearing was held to postpone the date of the eviction, that same house was burned down. Malcolm X and his family miraculously survived, and despite the event, no one could be charged.

But it wouldn’t be long before the final tragedy occurred. On February 21 of that same year, while at the Audubon Ballroom in Manhattan, Malcolm X began speaking at a meeting of the Organization of African American Unity. As he was speaking, someone shouted “Nigger, get your hands out of my pocket!” causing a commotion. Malcolm X’s bodyguards came to find out what was going on, while another man shot him in the chest with a sawed-off shotgun.

Nothing could be done for his life, declaring him officially dead at Columbia University Medical Center.

Malcolm X has been described as one of the most influential African Americans in history , living up to Martin Luther King or Richard Wright. He is credited with raising the self-esteem of African Americans and reconnecting them with their pre-slavery African roots. It is also thanks to Malcolm X that Islam had a greater impact in the United States.

Many Black people saw in Malcolm X the real struggle that needed to be done to win their rights, something they saw the civil rights movement doing too softly and which seemed to lead them nowhere.

He is also credited with having succeeded in changing the image of beauty, which until then had been monopolized in America by whites. Thus, at the end of the 1960s, and thanks to the inspiration of Malcolm X, the slogan “black is beautiful” emerged.

Several decades later, in the late 80s and early 90s, thanks to hip-hop icons such as Public Enemy, Malcolm X’s figure was once again in the spotlight among black youths, as well as his name being marketed as merchandising material. In 1992 the film Malcolm X , an adaptation of the activist’s autobiography, starring Denzel Washington and directed by Spike Lee, was released in cinemas.