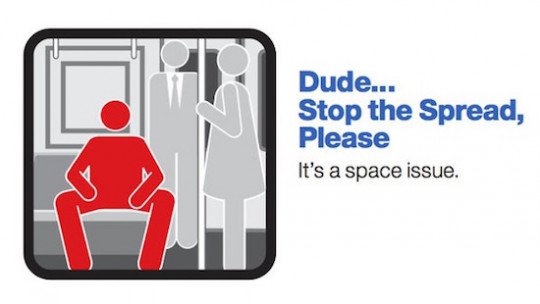 The term &quot;manspreading&quot; is relatively new , and in fact did not become popular until well into 2014, according to Google search data. However, the problem to which it refers has been known for years: a certain tendency on the part of many men to occupy much more than necessary seats on public transport by opening or stretching their legs too much.

In fact, as early as the 1970s, a feminist photographer named Marianne Wex devoted herself to documenting this phenomenon, and the result was a widely documented book called Let’s Take Back Our Space: Female and Male Language as a Result of Patriarchal Structures .

However, when it comes to explaining why manspreading exists, the gender and feminist perspective is not the only one, and nowadays the cause of this trend in male behaviour is debated . Now then… What do we know so far about manspreading?

To what extent is this a widespread problem?

As far as we know, manspreading is very common, so much so that it is normal to find at least one case in every train car.A recent study carried out with a sample of more than 5000 people who used public transport during different days of the week and hours of the day, more than a quarter of the men (26%) practiced manspreading, while this percentage fell to less than 5% in the case of women .

Furthermore, the same research concluded that even those men who stretched their legs in the absence of other passengers sitting next to them tended not to correct their posture as the car filled up with people and the seats disappeared.

Interestingly, the age group in which men were most likely to fall into manspreading is the one from 30 to 49 years old . At earlier ages the percentage was somewhat lower, and significantly lower in age groups of people over 50.

The campaigns against manspreading and the increasingly widespread use of the term itself do not seem to have served to eliminate this behaviour. What could be the reason for this resistance to change? Is it a cultural problem, or a biological one that will not go away because of many propaganda civics campaigns used in the form of disciplinary posters?

Obviously, many of the proposals that attempt to offer an explanation about manspreading have a more or less clear political background. For example, as we have seen, feminist authors like Marianne Wex indicate that manspreading could be another of those small privileges reserved for men ; in this case, that of being able to claim for themselves more space in certain situations, for their own comfort and in detriment of the well-being of the others.

Thus, this behaviour would be both a way of expressing her power, which from a feminist point of view would be linked to patriarchy , and a privilege that allows her to feel more comfortable.

On the other hand, critics of feminism, such as the Canadian Association for Equality (an organization linked to the Men’s Rights Movement) have come to argue that it is potentially painful for men to sit with their legs parallel.

In a less politicized (though equally politicized) way, researchers Ash Bennington and Mark Skinner suggest that manspreading is a biological issue that has to do with men having much wider shoulders than hips in comparison to women.

According to this reasoning, the space left between the knees should correspond to that left between the shoulders , which makes the minimum angle between the legs much greater by default. In addition, opening the legs would be a way of avoiding them taking up too much space right in front, where the corridor of the wagons often runs.

In short, there is still no clear cause to explain the phenomenon of manspreading, although it is known that it exists and that it is very present in the daily life of those who use public transport , and that it is significantly generalized in men.

Now, whether it is something caused only by the bodies’ own biology or by cultural norms and behaviors learned over generations is something we will probably know more about in a few years, as more research is done on this newly baptized behavior. Probably, in its origin we will find a mixture of biology and cultural learning normalized over centuries and centuries. In the end, it is very difficult to find a clear space between sex and gender.