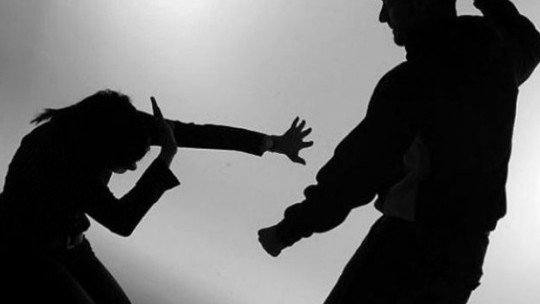 Violence has been part of human history. This phenomenon is as old as the first human instinct to dominate, to survive. Currently, we have tried to conceptualize and problematize it due to the different conditions derived from it . In recent centuries, humanity has been violated on an unprecedented scale. The emergence of different ideologies of hate has stained the chronology of human beings with blood, but there is still more behind this dark panorama.

The ghost of violence is becoming more tangible every day. It creeps through the streets, spreads through the media, bubbles up in workplaces, schools and homes. The number of research studies on this subject, carried out by psychology professionals and experts in the field, has increased in recent decades due to the need to generate new knowledge of both its causes and its consequences. It is clear that it is no longer enough to reflect on the problem; we must create psychological and social theories that will make it possible to prevent and correct this evil that afflicts all of society. To do this, a greater understanding of the reality, which is so complex today, must be achieved, directing efforts towards pertinent actions that not only prevent, but also give rise to a reformulation of the social paradigms surrounding violence.

According to the WHO (2014), systematic abuse between two or more family members is called family or intrafamily violence ; spousal violence refers to the behaviour of the partner or former partner that causes physical, sexual or psychological harm and gender-based violence is that which emphasises violence against women because of their gender, although some specialists differ from this and this will be detailed later.

The Consequences of Spousal Violence

But what are the repercussions of the acts of violence on the subjects of the study? Violence, in all its expressions (psychological, physical, economic, patrimonial, sexual and symbolic), carries with it observable consequences in both the social and individual aspects.

On an individual level they manifest themselves physically and psychologically . The individual level has in turn serious repercussions on the social aspect; where serious conditions are found in education, in the economy and in politics. Both individually and socially speaking, violence directly affects the quality of life. Psychologically speaking, quality of life is modulated by different factors such as: anxiety, depression, expectations towards treatment, social support and stress in its different modalities.

The word stress has become so commonplace today that its true effect has been neglected. According to the American Psychological Association (APA), stress is defined by Baum as “…[any] disturbing emotional experience that is accompanied by predictable biochemical, physiological, and behavioral changes. When faced with a stressful situation, individuals tend to resort to certain actions that allow them to regain control of the situation and reduce the level of stress; this is known as coping.

Coping is, then, any resource employed by the affected person to cope with the stressful event; these resources may be of a cognitive or behavioural type. Coping resources are made up of thoughts, attitudes, omissions, reinterpretations, behaviours, etc. The individual in question may develop or adopt different types of coping, and it should also be mentioned that not all people react in the same way to certain situations.

The emergence of stress in spousal violence: a study

Studies that allow us to know about coping with stress in both men and women who suffer from spousal violence are limited. Studying coping and coping styles will allow us to decipher other methods that serve as prevention or guidance in dealing with spousal violence. Therefore, the aim of the cited study was to identify the frequency of the styles and strategies of coping with stress used by men and women who are victims of domestic violence ; as well as the relationship between these and the permanence or termination of the relationship.

Among the unnamed and invisible voices still present, 5 subjects were the case studies; 3 female and 2 male. At the beginning, more subjects had already given their approval to be interviewed, but when faced with the questions in the questionnaires they chose to abstain from participation. There were some who, although they preferred not to participate, asked for some time simply to tell their story, which were not included in the study because the other instruments were not completed.

Tinting: women and men can suffer from spousal violence

It should also be noted that although statistically women suffer most from violence in all areas, men were also included in this study because of the importance this represents for the search for greater gender equity in society. This is because it is not possible to speak of gender equity when one of the two sexes is neglected, leaving violence against men invisible only because of their male condition. Conjugal violence, whether it is given by men to women, women to men, men to men or women to women, is reprehensible and has no place in society.

Study subjects were selected by availability in terms of gender, orientation, age and schooling. In terms of age, they ranged from 25 to 55 years old. All of them are active in the labour market and their schooling levels range from higher average to postgraduate. This allowed the research to highlight the fact that there are a variety of factors that influence conjugal violence, including social and cultural factors.

It is also important to comment that when talking about violence, the mind tends to invoke or visualize it graphically with broken lips and purple eyelids, however, according not only to the results of this research but also based on the results published by INEGI in ENDIREH 2011, of the four types of violence the most representative is emotional or psychological because of its high incidence rates. It is due to the daily occurrence of psychological violence that it has become naturalized, minimizing in turn the risks involved, which were mentioned above and allow progress between the different phases of violence. 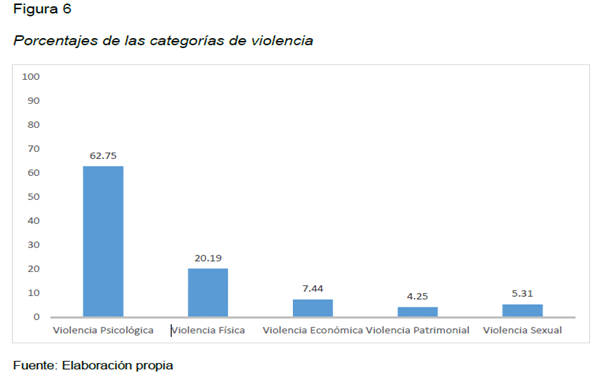 Within the ENDIREH questionnaire used for the interview, a section called opinion on gender roles was found, which mainly refers to the most common stereotypes related to the female and male sexes. In the results of this section, 100% of the interviewees concluded that they disagreed that women should obey everything they are told to do, that men should bear all responsibility for household expenses, and that it is the obligation of women to have sexual relations with their partners. Also, 100% of the subjects agreed that childcare should be shared with a partner and that the woman should be able to work and earn money. This allows us to see that absolutely all of the interviewees sought a politically correct response, avoiding providing an answer that was in line with their true opinion or reality. In this case, it is recommended that the ENDIREH reconsider the questions in this section. For the purposes of this research, it was not necessary to develop another instrument to supplement this section because these data were considered secondary and were not taken into consideration for validation or refutation of the research premises since gender stereotypes are not part of the objects of study.

In relation to coping strategies and styles, both sexes had almost similar proportions of self-blame strategies, with only .2 points difference between their averages. This means that both men and women present a similar tendency when blaming themselves for the acts of violence exercised against them. This type of strategy is very dangerous since to a certain extent it justifies conjugal violence by allowing the victim to stoically endure the abuse. At the other extreme are the strategies of acceptance and ventilation, which have a difference of 3.4 and 3 points, respectively, with men using these types of resources more.

Synthesizing, from the results obtained it can be concluded that the subjects, men and women, who are victims of marital violence usually employ both coping styles focused on the problem and those focused on emotion. However, there is a difference in the frequency of the strategies employed between men and women, with a greater recurrence of problem-focused styles by women and a greater incidence of emotion-focused styles by men. This means that women have a greater recurrence of actively facing up to conjugal violence, seeking to eliminate or diminish the effects of violence and the violence itself, while men face up to it in an inactive way and with strategies that are more oriented towards the emotional and their interpretation of the problem.

The fact that men had a greater tendency to use problem-focused coping styles suggests that the mediatization of men$0027s stereotypes and roles led them to deal with stress in a passive way, compared to women, where day-to-day abuse by their partners is less accepted.

As for the results shown on the coping styles used by the subjects of the study, it was observed that those individuals who decide to remain in a violent relationship have a greater repertoire of strategies that allow them to face the problem , compared to those who decided to terminate the relationship. It was also shown that of the subjects studied, those who used more resources within the coping style were more likely to terminate their relationship as can be seen in the following table. 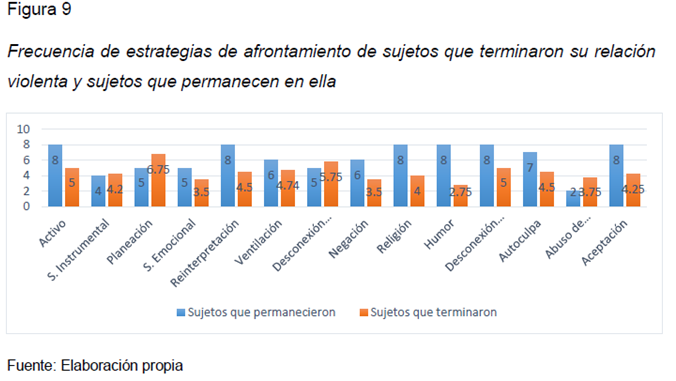 According to Díaz-Aguado, psychology has the power and the duty to play a substantial role in the fight against violence. One of the essential factors is the representation of violence, that is, “the representation that a person or a people has of violence and its possible victims, plays a decisive role in the risk of exercising it” (Díaz-Aguado, 1999, p.415). That is why this study sought to show that conjugal violence is not inevitable. Revealing the multiple faces of conjugal violence as well as the coping styles and strategies employed by the victims is an attempt to reconfigure the current representation of partner violence. For now, it can only be said that the road against violence is long and narrow, but every step taken is not a step in vain.