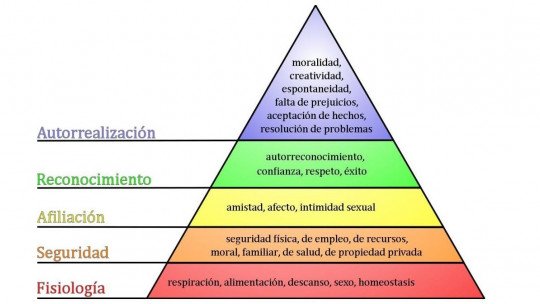 Maslow’s p iramid is part of a psychological theory that inquires into the motivation and needs of human beings: that which leads us to act as we do. According to Abraham Maslow, a humanist psychologist, our actions are born from the motivation directed towards the objective of covering certain needs, which can be ordered according to the importance they have for our well-being.

In other words, Maslow proposed a theory according to which there is a hierarchy of human needs , and he defended that as the most basic needs are satisfied, human beings develop higher needs and desires. From this hierarchy, what is known as Maslow’s Pyramid is established.

Abraham Maslow first introduced the concept of the hierarchy of needs in his article “A Theory of Human Motivation” in 1943 and in his book “Motivation and Personality”. Later on, the fact that this hierarchy used to be represented graphically in the form of a pyramid made the core of the theory become known as Maslow’s pyramid , whose popularity is remarkable even today, decades after it was first proposed. While some schools that existed in the mid-twentieth century (psychoanalysis or behaviorism) focused on problem behaviors and learning from a passive being without much choice to influence the environment more than it influences it, Maslow was more concerned with learning about what makes people happier and what can be done to improve personal development and self-realization.

As a humanist, his idea was that people have an innate desire to self-realise, to be what they want to be, and that they have the capacity to pursue their goals autonomously if they are in an enabling environment. However, the different objectives that are pursued at each moment depend on which goal has been achieved and which remain to be fulfilled, according to the pyramid of needs.In order to aspire to the goals of self-realization, previous needs such as food, security, etc. must first be covered. For example, we only care about issues related to self-realization if we are sure that we have a stable job, assured food and friends who accept us.

Thus, the five categories of needs in Maslow’s Pyramid are physiological, safety, affiliation, recognition and self-fulfilment ; the physiological needs being the lowest level, and rising in the order indicated.

In Maslow’s pyramid, this researcher talks about instinctive needs and makes a distinction between “deficit” needs (physiological, security, affiliation, recognition) and “development of the being” (self-realization). The difference between one and the other is due to the fact that “deficiencies” refer to a lack, while “development of the being” refers to the individual’s work. Satisfying the needs of the deficit is important in order to avoid consequences or unpleasant feelings.

The needs of the “development of the being”, on the other hand, are important for personal growth, and they do not have to do with the deficit of something, but with the desire to grow as a person.

They include the vital needs for survival and are of a biological order. Within this group, we find needs such as: the need to breathe, to drink water, to sleep, to eat, to have sex, to shelter.

Thus, in this layer of needs are those that make possible the most fundamental biological processes that make the existence of the body viable. They provide cover for the physiological functions that maintain the balance in our tissues, cells, organs and, especially, our nervous system.

Maslow thinks that these needs are the most basic in the hierarchy, since the other needs are secondary until those at this level have been covered.

In this part of Maslow’s pyramid, safety needs are included that are necessary for living, but are at a different level than physiological needs. In other words, until the former are satisfied, a second link of needs does not arise, which is oriented towards personal safety , order, stability and protection.

It can be said that the needs that belong to this level of Maslow’s pyramid have to do with expectations and with the way in which living conditions allow the development of medium and long-term projects. They are based on a kind of “mattress” based on both goods and rights and social capital.

Maslow describes these needs as less basic, and they make sense when the above needs are met.

For Maslow, this need is expressed when people seek to overcome feelings of loneliness and feel that there are emotional ties between them and certain people. That is to say, when they try to transcend the individual sphere and establish links with the social environment.

These needs are continually present in daily life, when the human being shows desires to marry, to have a family, to be part of a community, to be a member of a church or to attend a social club. Belonging to a group, whether it is more or less small, helps to give meaning to what is done in daily life, and in addition the personal contact and social relations that favour these ties stimulate us in a way that, for Maslow, the resulting experience can be described as a need.

Examples of these needs are requited love, affection and membership or affiliation to a certain social group.

This level of the hierarchy of human needs is also known as needs for esteem, and has to do with the way we value ourselves and others, the rest of society.

After covering the needs of the first three levels of Maslow’s Pyramid, the needs for recognition appear as those that favour the strengthening of self-esteem, recognition towards one’s own person, particular achievement and respect towards others; by satisfying these needs, the person feels confident and thinks that he or she is valuable within society. When these needs are not satisfied, people feel inferior and worthless.

This need for Maslow’s hierarchy is best understood as a way to feel good about one’s self-concept through those things about ourselves that we see reflected in the way others treat us.

According to Maslow there are two needs for recognition: an inferior one, which includes respect for others, the need for status, fame, glory, recognition, attention, reputation, and dignity; and a superior one, which determines the need for self-respect, including feelings such as self-confidence, competence, achievement, independence, and freedom.

Finally, at the highest level are the needs for self-realization and the development of internal needs , spiritual and moral development, the search for a mission in life, disinterested help for others, etc.

This level of Maslow’s pyramid is one of the most difficult ranks in the hierarchy of needs to define, because it involves highly abstract objectives that are not achieved by concrete actions, but by chains of actions that occur over relatively long periods. Therefore, each individual will have different and personalized needs for self-realization.

Although some research supports Abraham Maslow’s theory, most of the data collected in many investigations does not seem to be on the same line as Maslow’s pyramid. For example, Wahba and Bridwell (1986) conclude that there is little evidence to demonstrate Maslow’s postulated hierarchy, even though it is still very popular today.

In addition, Maslow’s Pyramid has also been criticized for being difficult to prove his concept of self-realization , since it is very abstract. In the end, in science it is necessary to specify very well the meaning of words and to propose some “operational” implications of them, and if a concept leaves much room for interpretation, it is not possible to carry out research oriented to study the same, nor to draw clear conclusions. Many of the concepts and categories described in Maslow’s pyramid of needs are too ambiguous to be studied scientifically.

In a study published in 2011, researchers at the University of Illinois tested Maslow’s pyramid and found that satisfaction of the pyramid’s needs correlated with a person’s happiness. But this research, unlike Maslow’s theory, concluded that the needs for recognition and self-realization were also important even though the most basic needs were not met. Therefore, it questioned the sequentiality that Maslow proposed in his theory: it was not necessary to have basic needs fulfilled in order to aspire to achieve the objectives related to the most refined needs.

On the other hand, Maslow’s research was based on a very small and therefore unrepresentative sample of individuals. The criticism of his methodology refers to the fact that he himself chose the people he considered self-realized, after reading about them or talking to them and reaching conclusions about what self-realization is. In fact, the people that Maslow interviewed when making his pyramid of needs can hardly represent the majority of the human population, since they were people belonging to Western culture, rich or very influential. Some of the people he investigated are Albert Einstein or Eleanor Roosevelt . Maslow’s pyramid was created from the study of exceptional cases, rather than what is normal in human populations.

The relevance and legacy of this theory

Regardless of these criticisms, Maslow’s pyramid represents an important contribution to a change of vision within psychology and helped to establish a third force within the profession (the other two main forces were psychoanalysis and behaviorism). His approach to psychology and life in general inspires enthusiasm, no longer assumes that people are passive beings, nor does it focus on pathological behaviors. The study of motivations and behaviour patterns not related to mental disorders became a sign that psychology need not be limited to mental health.

On the other hand, Maslow’s works were a first attempt to study something of great importance: the common good , those contextual elements that are a priority for all people. If the need to have access to food is one of the most important aspects for people, it is possible to propose management models for spaces that take this principle into account.

Moreover, Maslow’s pyramid has had a great impact not only in psychology, but also in the business world (especially in marketing, but also in the world of Human Resources) or in sports, for example. The fact that he establishes a hierarchy of needs provides an easy and intuitive way to establish plans to motivate and to generate attractive products depending on the type of people you want to influence.

Current scientific psychology must continue to investigate what motivates us and leads us to aspire to goals, and Maslow’s pyramid may not be a construct that explains well how we act, but at least it is a first brick in this type of study and can be used as a reference. However, it is necessary to continue working to generate concrete concepts that lend themselves to scientific research, beyond the appeal to vague ideas that may mean different things to each individual.