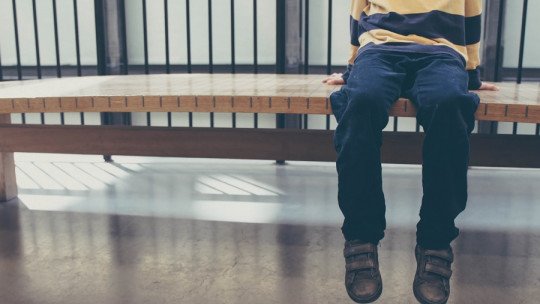 Phobias are a very common group of anxiety disorders. In fact, and although they are rarely the main reason for consultation for a Psychology professional, they are the most frequent comorbid problem in other clinical entities of the same category (generalized anxiety, for example).

Those who suffer from a phobia experience an overwhelming fear, which they often perceive as uncontrollable, and which conditions the way they live life or carry out activities that are meaningful to them.

In this article we will deal with mastigophobia, a relatively common fear in childhood and which has proved to have very deep roots. Here we will discuss its clinical expression, potential underlying causes and the psychological treatment currently available.

How does mastigo-phobia express itself?

Mastigophobia (also called poinephobia) consists of a generalized, irrational and disproportionate fear of punishment . It is a word composed by the confluence of two terms that come from Greek: “mastigos” (which could be translated as whip or flagellum) and “phobos” (which would mean fear or aversion). It describes any irrational panic reaction at the time a correction is applied, and which exceeds what would be predictable based on its intensity or the immediate conditions in which it occurs.

It is important to consider, however, that punishments are strategies aimed at reducing the frequency with which behaviour considered undesirable (for the child or for others) is observed. That is why, implicitly, they are attributed an aversive quality on which their effectiveness is based. This fear, therefore, must be differentiated in a matter of degree from what is expected under normal conditions during the application of the procedure; in such a way that it conditions the way in which children (who are the most affected by this disorder) feel, think and act.

Below are the forms that mastigofobia can take at a clinical level. Although most commonly occurring in childhood, fear can occasionally persist into adulthood.

In general the fear is projected both towards physical and psychological punishment , and precipitates a physiological reaction similar to that of a panic attack. Likewise, the phobia extends to positive punishments (production of an aversive stimulus) and negative punishments (withdrawal of something that the child perceives as pleasant or reinforcing). Both of these behaviour modification strategies have been the subject of debate in recent years.

The feelings of anxiety that emerge in the context of mastigo-phobia, as a result of punishment or anticipation, are very similar to those described in other phobic pictures. For descriptive purposes, we can differentiate three relatively independent essential areas (despite having multiple relationships with each other): physiological, cognitive and motor.

On a physiological level, hyperactivation of the autonomic nervous system is observed, and in particular of its sympathetic branch (tachycardia, tachypnea, sweating, tremors, etc.). On a cognitive level, the concern and catastrophic interpretation of the fictions that occur within normal coexistence are very relevant. Finally, at the motor level, the avoidance of any situation that could lead to the imposition of physical or psychological punishment is noteworthy, even if there is only a remote possibility for any of them.

Children with mastigo-phobia fear physical punishment (e.g. spanking) as a consequence of engaging in behaviour considered undesirable by those (e.g. parents) who might administer it. This feeling does not always have an objective basis, so it may extend even to those who do not seek to generate any punitive situation.

This phenomenon is common in children who are adopted by a new family after having gone through traumatic experiences of physical abuse with their original caregivers. The previous parenting style would facilitate learning about the dynamics of conflict resolution that would extend to the current environment. This is why react with a huge shock when the adoptive parents confront them or correct them for disruptive behaviour, despite the fact that they do so in an appropriate manner and without the mediation of any fuss.

Children with mastigo-phobia are very sensitive to the facial expression associated with anger, an emotion that often anticipated the physical punishments they suffered throughout their lives. This is a learning process forged over a long period of time, from which it is possible to predict a negative and potentially dangerous stimulus. Over the years, disproportionate vigilance towards hostile non-verbal signals can be maintained.

Punishments can be both physical and psychological. The latter includes behaviour such as contempt, isolation, threat, unjustified disapproval or insult. Those who suffer from this phobia show an overwhelming fear during any interaction in which these adverse exchanges may occur, so they develop a behaviour aimed at avoiding them at all costs. Thus, they may assume an overly complacent attitude towards others , despite the fact that a clear abuse is taking place in their relationships.

One of the situations that generate the most anxiety for people suffering from this disorder is the silences resulting from a situation of interpersonal conflict. The fact of feeling ignored is perceived as a punitive act of unbearable dimensions, before which intense bodily sensations emerge that can progress to an acute picture of hyperactivation (such as nausea, abdominal discomfort, tachycardia, tachypnea, etc.).

Children with this phobia feel that they could be susceptible to punishment anywhere and for any reason. The moment they become aware that they have done something reprehensible, they harbour an intense fear of being found out, of being blamed or reprimanded.

All this leads to a constant concern about what might happen , as well as to disproportionate ideas (suffering severe corrections for an innocuous, accidental or involuntary act).

Children suffering from mastigo-phobia are hypervigilant to any mistake they might make, so that fallibility also becomes a fact that triggers their anxiety levels (physiological, cognitive and motor). For this reason, they invest overwhelming efforts in many of their activities. It is fundamental to point out that they would not get involved in them for the intrinsic pleasure of doing them correctly (or for the motivation of mastery), but for fear that the error could precipitate the feared punishment. They would not seek the good, but would run away from the bad.

This expression of mastigo-phobia is common in children whose parents opted for authoritarian parenting styles, oriented towards exclusive reinforcement of achievements and systematic punishment of any deviation from these. This pattern would forge a painful perfectionism that does not pursue excellence, but rather the avoidance of harm.

Mastigofobia is common in those children who have been raised based on the use of both positive and negative punishments , in order to systematically correct their behaviour. It is especially common in cases where the application of these punishments was excessive, resulting in physical harm or the deprivation of activities necessary for healthy physical/emotional development (hitting, permanent prohibition of sharing time with friends, etc.).

It is not uncommon for children with mastigo-phobia to report a serious history of abuse behind their backs , and to live in constant fear of punishment for their actions. Through sensitive investigation of the past, it is often possible to detect the point from which this disorder was articulated, which is usually associated with a deterioration of self-esteem and a self-evaluation burdened by the belief of being “undesirable and/or inappropriate”. It may also appear as a consequence of having observed severe punishment of others (siblings, schoolmates, etc.).

What is the treatment for mastigo-phobia?

Treatment of mastigo-phobia is complex, as it must integrate many domains of childhood experience: past experiences of a traumatic or severely hostile nature, impaired identity formation, persistent difficult emotions, and even adaptive difficulties in areas such as school or home. Parents must also be involved, in order to offer adequate psychoeducation on the way in which reinforcements and punishments are correctly applied (and the situations in which it is appropriate).

Rigid perfection is also a matter that usually requires intervention , since the child sets a standard that is impossible to satisfy without deteriorating other key facets of his life (leisure, social relations with his peers, etc.), and that also does not allow him to build a positive image of himself. The pattern described may end up being associated with co-morbidities such as depression (which is expressed as irritability during this period), or other anxious pictures that extend into adulthood.

This is an approach that must consider the family system as a whole and be very sensitive to the specific needs of the child. The cognitive-behavioral treatment allows modifying the environmental contingencies that maintain the problem , and in turn exploring the child$0027s thoughts and emotions in order to detect and discuss the beliefs that are contributing to his or her symptoms.

Finally, in the event that it becomes apparent that the family is engaging in any form of abuse of the child, it will be essential to inform the competent authorities so that they can mediate the appropriate legal acts.