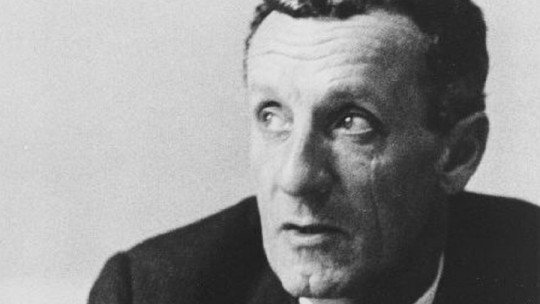 European thinking on reality is heavily influenced by authors from the 16th and 17th centuries. In particular, the figure of René Descartes (who would postulate the dualism between mind and body) has contributed to almost all sciences and arts, thanks to a legacy of enormous philosophical and historical significance.

Many have long reflected on how body and mind could coexist within two different ontological planes, and what their respective interactions (if any) would be. From this, both like-minded and dissenting positions have emerged over time, which have stimulated many of the advances in philosophy in past centuries.

In this article we will detail the life and work of one of the most prolific French authors of the 20th century, who “revived” the Cartesian thesis and tried to reconcile it with ideas from metaphysics and phenomenology. His proposal (influenced by George Wilhelm Friedrich Hegel and Edmund Husserl) had remarkable social and political connotations.

Here we will see what were the most representative contributions of Maurice Merleau-Ponty ; who lived during the ominous period of the two great world wars and maintained a position in the face of existence that would resonate widely in culture, the arts and modern sciences.

Maurice Merleau-Ponty was a French philosopher who lived in the first half of the last century . He was born in the town of Rochefort-sur-Mer on March 14, 1908, and died in 1961 of an acute myocardial infarction. He is currently considered one of the most relevant European existentialist thinkers, as his work served to build bridges between philosophical visions (especially idealism and empiricism) that were distancing themselves from each other due to the deep horror of the wars that were raging on the earth in the years that he lived. This effort is known as the ontological “third way”.

His teaching work was also very important, both at the Faculty of Arts in Paris (where he also obtained his doctorate) and at the Sorbonne and the Collège de France, where he would occupy one of the most notable chairs of Theoretical Philosophy until his death (his body would appear lifeless on a work by Descartes, one of the most relevant authors to understand his way of thinking and living). He was known for his preoccupation with politics and society, showing a strong Marxist perspective that he came to renounce some time later.

Although he died at a young age, he left many books/reflections. He was one of the greatest friends of Jean Paul Sartre , with whom he formed an intellectual resistance group (during the first of the world wars) and founded one of the most iconic publications in Europe and the world: the political/literary magazine Les Temps Modernes . Another author of enormous importance in the feeling and thinking of that grey moment also participated in this project: Simone de Beauvoir. Her format of monthly installments, which would later become a four-monthly one, included some of the most valuable philosophical ideas of the post-war period, which allowed her to continue to exist until recent years (from 1945 to 2018).

In addition to the numerous writings she shared in the aforementioned magazine (compiled in “Sentido y No Sentido”), Merleau-Ponty dedicated much time in her life to literary creation on Philosophy. Phenomenology was the branch of knowledge that most attracted her attention , rocked by the inspiration of Edmund Husserl and other great thinkers of similar orientation.

Among his works, the Phenomenology of Perception (perhaps the author’s best known), the Adventures of Dialectics , the Visible and the Invisible (he died while writing it and it was published posthumously) stand out, the Prose of the World , the Eye and the Spirit and the Structure of Behavior (his first complete work). Most of his works have been translated into multiple languages, including Spanish.

The distancing from communism brought about an important transformation in the life and work of Maurice Merleau-Ponty : on the one hand he abandoned the daily writing on political matters, and on the other he ended up breaking the friendship that united him with Jean Paul Sartre. In fact, during the last few years, they “got involved” in very sour polemics, and criticized their respective ideas with a particular vehemence. In spite of this, Merleau-Ponty’s death had a powerful emotional impact on Sartre, who dedicated a letter of more than 70 pages to him (in the magazine in which both participated) extolling all the virtue of his work and recognising his great value as a thinker and human being.

From now on we will deepen in the thinking and feeling of the French author, always “attributed” by the consequences of the Cartesian dualism in the subjective experience . His orientation was clearly phenomenological, and he addressed such important issues as freedom and integrative monism. He also thought about the potentiality of the felt body as the inescapable vehicle for experience. Let us see what his main contributions were.

One of the main goals of this author was to find a meeting point that would reconcile the discrepancies between idealism (consciousness as the only source of potential knowledge) and materialism (reality rests on what it has at its disposal in tangible matter).

He also had a deep knowledge of the Cartesian thesis, but did not conceive that the body (res extensa) and the thought (res cogitans) should have an independent nature , opting for the coherent integration of both as common facts and of equivalent essence. If this were not so, every individual would experience a powerful dissociation when observing himself, as if he were composed of two dimensions that never manage to coexist on the same plane of reality.

One of the ways in which he achieved this theoretical purpose was with his postulate of the body as a sentient subject (or leib), different from the physiological organism that was the object of the natural sciences (körper). Through such a vision, corporeality would be endowed with a component alien to the extended body, which would sink into the cogito and subjectivity, being able to unite physical “activity” with that of thought (since they would go on to inhabit together and recognize each other).

Through this idea, the classic dilemma of freedom would be partially resolved, since the author stated that all thoughts are free in essence, but that they are constrained by the limits of the body in its quality of matter. Thus, it could only be solved by subjectivizing the flesh, in an identical way to his proposal.

This division of the body implies that it becomes a channel of communication in the social space , and a fundamental form of consciousness about oneself (self) in front of the things of the world. Such a body would not be the limit, but would be the vehicle that would make possible the experience of interaction between the plane of the sentient and the sensitive world. This would happen by its nature halfway between the physical and the mental. The encounter of a body and another body would be the axis through which the subjective lives of two beings would unfold or be distinguished as unique, at the base and foundation of all social knowledge.

The thinking individual would subjectivize the environment through his participation in it as body and flesh, postulating the concept of “incarnation” as the tacit confluence or cogitans. In this sense, reality would be no more than the simple projection of the individual in coordinates of space and time that do not exist beyond his own experience, thus touching on some of the elementary foundations of subjective idealism and integrating the epojé (which Edmund Husserl rescued and adapted from Greek philosophy) with materialism.

Merleau-Ponty would not deny the existence of a physical dimension, but would equate it with that of the body itself, and would conclude that it is accessible as a stage where conscious beings make use of their freedom to exist (body located at the junction between the consciousness and the world of nature). Beyond that, time and space would lack their own existence, since they would only be a property of objects (so that they can be felt).

From the prism that he presented, no philosopher (person open to the knowledge of things) would be only a passive spectator of reality , but would exercise on it a direct effect as an active and transforming agent. Behind this phenomenon lies the relationship between being and otherness (which is the elemental mechanism for phenomenological creation) and the subjective knowledge that we all treasure within us, which is unique and difficult to reproduce or generalize through some procedure of conventional science, would be constructed.

As it can be seen, Merleau-Ponty’s interest was the study of the consciousness starting from the individual perception of reality , so he is considered one of the main authors of perceptive phenomenology. Despite the fact that in the last chapter of his life he reformulated concepts typical of his philosophy, he firmly maintained the belief that the relationship between every man and history necessarily passes through the way in which he perceives the facts that unfold during his life cycle, defining a dialectic between thinking bodies as an ecosystem for the memory of humanity.