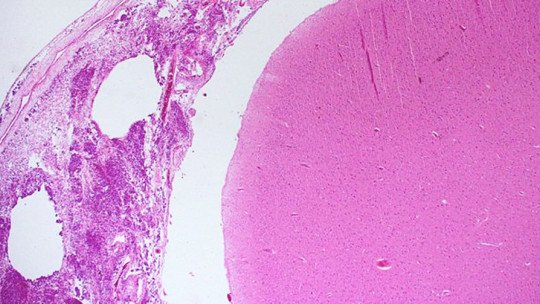 The brain is one of the most important organs , if not the most important, of our entire organism, since it governs and controls the different processes and functions that allow us to stay alive and make us be as we are. Fortunately the brain has the protection of various structures, such as the skull or a series of membranes called the meninges.

However, sometimes there are alterations in these protective elements that can produce serious consequences, as in the case of meningitis .

The meninges and their basic functions

The meninges are a series of three membranes located between the skull and the brain that exert numerous functions of great importance in protecting the brain and spinal cord.

These membranes, called dura mater, arachnoid and pia mater , form a barrier that allows the cushioning of possible blows and traumas that could affect the integrity of the nervous system. They possess various receptors that allow for the detection of possible cerebral alterations, which would otherwise not be possible due to the fact that the brain itself has no receptors of any kind.

In addition, they allow the generation of the cerebrospinal fluid (specifically the choroid plexuses of the arachnoid) and its flow around the nervous system, thanks to which it is possible to excrete residues of brain function while helping to nourish and stabilize the neuronal environment.

Finally, the meninges also serve to structure and shape the brain and to keep the intracranial pressure level stable.

Meningitis: what is it?

The meninges, in short, are an element of great importance when it comes to protecting and maintaining the health of the thinking organ. However, there are different problems that can lead to these membranes being damaged and that in turn can cause damage to the nervous system. One of them is meningitis.

We understand by meningitis the process by which the meninges suffer an inflammation due to an infection , which can be due to different causes. This also causes an alteration of the cerebrospinal fluid, which can affect the functioning of the brain beyond the mere pressure exerted on it. Brain pressure may increase greatly, while at the same time the balance of the environment in which the neurons act is altered. Meningitis is a high risk since it can affect the integrity of the nervous system and even cause the death of the person suffering from it.

The symptoms of meningitis can vary depending on how the inflammation is and which parts of the system it affects, but broadly speaking, headaches, feelings of weakness and fatigue, decreased or even loss of consciousness can be found frequently. It is not uncommon for high fever, vomiting and dizziness to occur along with dehydration. Sometimes there are perceptive alterations such as hallucinations and delirium, and also some motor symptoms such as tremors and even comic attacks.

Possible causes of this affectation

Meningitis can have a number of causes, but in general it can be divided into viral and bacterial.

This type of meningitis is caused by an infection produced by the entry of certain bacteria into the body , such as pneumococcus, streptococcus or meningococcus. This entry may be due to trauma, pneumonia, immune and/or metabolic problems or even due to the body’s own bacteria. They are especially serious when they occur in children, the elderly and people with various diseases.

Viral meningitis is caused by certain viruses. They are also known as aseptic meningitis because they do not usually reflect the entry of microorganisms into the system. They tend to be mild, causing fevers, headaches and other symptoms that are usually not very intense.

However, there are special cases that are particularly risky and serious . A special case is that produced by the herpes virus, since it tends to also produce encephalitis or inflammation of the brain which can cause fatal or disabling alterations in the patient’s brain.

Another virus that causes meningitis is HIV , which due to the weakening of the immune system can lead to complications.

Although usually due to infections, sometimes inflammation of the meninges may be due to other causes . For example, they can be produced as a reaction to certain drugs and psychotropic substances, trauma, tumours and other diseases.

Treatment of this inflammation

The treatment of meningitis and its prognosis will largely depend on its aetiology, i.e. its causes. The possibility that the bacteria and viruses that cause meningitis may become infected must be taken into account. Therefore, some caution is recommended for at-risk populations such as children under one year of age or the elderly.

Fortunately, many of the bacteria that are capable of causing meningitis have their own vaccine, which is usually given in childhood .

In cases of bacterial meningitis we are faced with a serious situation in which the application of antibiotics is necessary immediately . Due to the urgency of treatment, there is often not enough time to perform a culture and analysis of the bacteria, so medicines are often used that attack most of the bacteria that usually cause this problem.

The prognosis will depend on the situation of each patient at the time of admission and whether they have received timely treatment, the age, the state of the immune system and the type of bacteria causing it, with a risk of death especially in children under one year of age and in the elderly . In some cases, even if they are cured, they can present sequelae such as intellectual disability, epileptic seizures or loss of senses.

As far as viral meningitis is concerned, as long as it does not cause an inflammation of the nervous system as such, there is usually a complete cure without sequelae , in many cases disappearing by itself. However, children, the elderly and people with autoimmune diseases or metabolic problems are at greater risk.

Apart from what causes meningitis, the symptoms that occur must also be treated, c omo when convulsions occur or in the case of dehydration . Similarly, possible oedema and increased pressure in the nervous system should be treated.